OKO: I Love You Computer Mountain 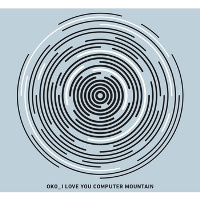 While pretty much all music is derivative, and to a greater or lesser degree inspired by what has gone before, every so often a band appears that shakes up the status quo. OKO—formed in 2010 out of the Dublin collective Bottleneck—certainly doesn't hide its influences on its debut recording, but its musical paint box of electronica, free-jazz, noise, dub, drone, funk and ambient sounds dishes up a colorful collage that dares to be different.

The low-key dub, airy electric piano and sci-fi squeaks of "Axelgrease" move seamlessly into the appropriately titled "What's the Concept?, an arhythmic mélange of keyboard minimalism, distorted sounds and spacey abstraction. "Oblong" picks up the baton with its stoner's ambiance. A distorted voice—part lowing cow, part chanting monk—groans in the depths as guitar and DJackulate on kaval and then tenor saxophone slowly spin a gently lulling melody that, once birthed, then steadily dissolves.

A fatter rhythmic muscle propels "Magnet Paste," which sees OKO fuse contemporary rhythms with swirling, prog-rock keys that evoke an earlier era. The sci-fi soundscape of "Unbelievable Sushi" stems from noodling keys and electronics, and a faint percussive rattling. A keyboard motif fades in, revolving like a sacred mantra as bass guitar and drums lend support. The momentum is short-lived, however, as the notes of the motif melt together and fade out, just as surreptitiously as they'd arrived.

Clocking in at around forty five minutes, the music unfolds like the soundtrack to a mildly hallucinogenic dream spiked with edgy dramaturgy. As such, it's best appreciated uninterrupted, with headphones; either that or blasting out of stack speakers. The contrasting textures and juxtaposed rhythms create just enough tension to make the sonic journey as unpredictable as it is absorbing. Should appeal to Rastas, improv-heads and space rockers alike.