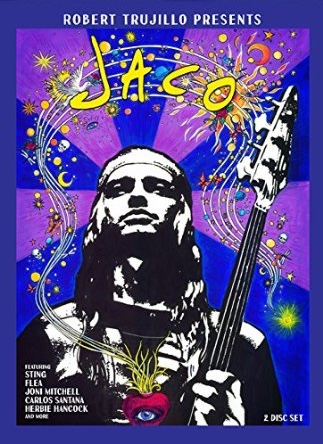 If you think you know the legendary Jaco Pastorius, you may not, until you see this film produced by Metallica's Robert Trujillo and directed by Paul Marchand. Not only does it contain liberal samples of Pastorius' music throughout his career, it includes home movies, location shots, and other live footage as well as new and past interviews that reveal Pastorius in all his glory and vulnerability, including a ruthless examination of his last days and violent death. This is not a film for those who want a pleasant experience. It is tumultuous and emotionally challenging. It is a raw and unblinking portrayal of a free spirit who was also a musical genius. It is about the cutting edge of jazz and rock music, and a narrative of a life that is about to explode or plunge into a cavern of darkness at any time. Not quite film noir, it is definitely existential. Pastorius took many serious risks and leaps into the unknown, as if he were playing on the edge of madness. In so doing, he also made musical history.

Briefly, Jaco Pastorius was "an influential American jazz musician, composer, big band leader and electric bassist. He is best known for his work with Weather Report from 1976 to 1981, as well as with Joni Mitchell, Pat Metheny, and his own solo projects. As a musician, he developed a highly influential approach to bass playing that combined a deep understanding of advanced harmony with ferocious technical prowess. His signature approach infused Latin-influenced 16th-note funk, lyrical soloing on fretless bass, bass chords and innovative use of harmonics. He was inducted into the Down Beat Jazz Hall of Fame in 1988, one of only seven bassists so honored (and the only electric bass guitarist)."

This biopic amply points to Pastorius' remarkable accomplishments, namely a huge expansion of the capabilities of the bass guitar, making it for the first time a melodic instrument capable of rich solo improvising, and a criss-crossing of genres, in particular playing a major innovative role in the jazz-rock-funk fusion movement. But the film also wants to show you what it was like to be in his head, what it felt like to be around him, and to be influenced by him, personally and musically. The filmmakers dug up many home movies and videos from the time of his childhood in Miami until his untimely death at age 36 from a violent confrontation in a bar following his attendance at a Carlos Santana concert. They show a man with a lust for life and a spontaneity that broke all the rules. He was paradoxically full of both love and egotism. He loved his wife, adored his children, and was often kind and generous to his friends and associates. At the same time, he got his first major gig when he bragged to Joe Zawinul of Weather Report that he was "the greatest jazz bassist in the world." Often when he performed, he was a showman who made his co-musicians seem extraneous. As his drug and alcohol addiction took hold during his tenure with Weather Report, he became out of control, erratic, unreliable, and at times severely depressed. Hospitalized, he was diagnosed with bipolar disorder (manic depression). The film leaves it up to the viewer to decide whether Pastorius at that time was just out of control from substance abuse or whether he suffered from an undiagnosed mental illness all his life. To be fair, even psychiatrists have trouble distinguishing between the two.

The interviews in the film and a separate disc of out-takes vary in interest and insight. Some just repeat clichés about Pastorius, while others show genuine appreciation and compassion for him while at the same time revealing the distress he created in those around him. An especially moving interview in the out-takes is with Carlos Santana, with whom Pastorius briefly worked. Santana, devastated by Pastorius' death, and guilt-ridden because the fight happened right after one of Santana's performances in Miami, talked about bathing in the ocean at Stinson Beach in California, a healing ritual in which he asked God to help him be free of the burden of guilt and move on. It not only shows how important Pastorius was to his fellow musicians but also reveals the soft underbelly of Santana as a sensitive, compassionate, and vulnerable human being. Most of the interviews in the film, and for that matter in many jazz documentaries, are superficial by comparison.

This film, like most music documentaries, provides only excerpts from performances and recordings, and often the visuals distract from the music itself. Unfortunately, it creates the impression, supported by Pastorius' chaotic lifestyle, of a musical wildman, driven by impulse rather than dedication to the art form. The truth is that Pastorius took his music seriously and devoted many hours to learning, practicing, inventing, and composing. He was the inventor and master of fretless bass guitar. He blended in with yet contributed his own unique sounds to a wide range of groups, vocalists, and instrumentalists. The serious side of him gets lost in the intensity of the film's shifting from one scene to another. You can hear the more serious side of Pastorius in his first album as a leader, Jaco Pastorious (Epic/Legacy/Sony Music), 1976. And if you want to delve more deeply and introspectively into his moth-to-the-flame life, check out Bill Milkowski's Jaco: The Extraordinary and Tragic Life of Jaco Pastorius (Backbeat Books, 2005), a studied and carefully documented biographical account.