BY EDWARD BLANCO
February 6, 2016
Sign in to view read count 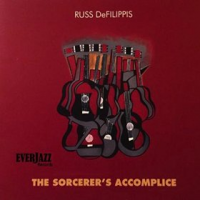 Jazz guitarist and educator Russ DeFilippis from Stony Point, New York delivers his second album as leader with the appropriately titled The Sorcerer's Accomplice, a ten-piece project of smooth-styled jazz with a Brazilian flair. Why is the album title so apropos? In 2012, DeFilippis met fellow educator, composer and pianist Richard Sorce at a rehearsal of Sorce's Latin-jazz compositions which, eventually became part of Sorce's recording A Place I've Never Been (Ever Jazz Records, 2015).

For this recording, DeFilippis enlists Sorce's help borrowing ten of the pianist's light Brazilian compositions, includes Sorce as a player and arranger and draws on the same horn section that appeared on the pianists' previous album. Accordingly, in some respects, the guitarist, as the title implies, becomes an active willing participant in the commission of a delightfully engaging musical production which this album certainly is.

While the degree of involvement from Sorce is major, this is still unquestionably, the guitarist's album and the beginning "Where You Are" establishes this fact with pronounced play from DeFilippis accompanied by the three horn section of Vinnie Cutro on trumpet, Mark Friedman on the alto and Erick Storckman on trombone.

There are three beautiful heart-felt balladic pieces of which the first is "So Little Time" featuring the guitarist on warm chords as Sorce plays the soft keys, steady bass lines from Bill Moring and Bobby Deitch 99 on drums and light cymbal accents. The other two gorgeous ballads are "One More Lifetime" and the gentle finale of "How Do You Like That?"

In keeping with its namesake, "Sing" is the only vocal of the set showcasing the lush voice of Kerry Linder who sings in both English and Portuguese. DeFilippis demonstrates his prowess on the custom Mark Campellone archtop guitar with elegant riffs on the sprite "Love You Too." The taste of Brasil is obvious on many tracks but none as assertive as on "Celebracao" and "Go Figure."

Other notable tunes—all keepers by the way—are "When I'm With You" and "Until Forever," capping a thoroughly attention-grabbing and melodic session of light jazz. Though Russ DeFilippis plays the music of Richard Sorce on The Sorcerer's Accomplice, It's DeFilippis' mastery of the guitar that are really on display here, as he interprets an absolutely beautiful selection of music with grace and swagger.

Where You Are; So Little Time; Sing; Love You Too; When I'm With You; Celebracao; One More Time; Go Figure; Until Forever; How Do You Like That?