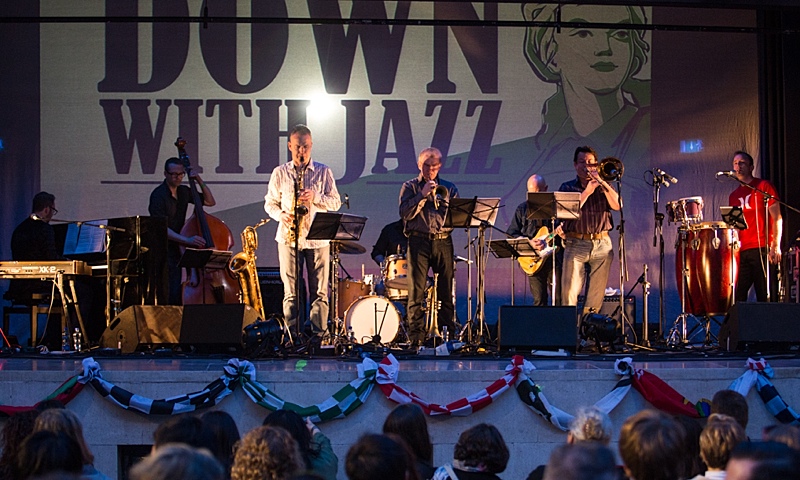 There's a lot of really exceptional music going on in Dublin right now, and the media should be telling people about it in an informed way. —Lauren Kinsella

Down With Jazz
Meeting House Square
Dublin, Ireland
May 31-June 1, 2014

There's nothing quite like a Bank Holiday weekend, sunshine and music. Having moved from 2013's September slot with its unpredictable autumn weather to the last weekend in May with its unpredictable spring weather, Down With Jazz 2014 passed off dryly, which raised the spirits and surely contributed to the dancing that broke out sporadically.

It was the combination of spirits—of the alcoholic kind—and jazzy dancing that incited the ire of the Catholic Church in 1930s Ireland. The threat to the old ways and to the authority of the Church was really the issue and lead to street demonstrations in 1934, demonstrations whose slogans inspired Down With Jazz's name eighty years later. Father Conefrey, who was at the head of the anti-jazz rally in Leitrim on New Year's Day 1934, equated jazz—and more specifically the unsupervised dancing it inspired—with paganism and lustful desire. Down with that sort of thing!

"Dancing is a vertical expression of a horizontal desire," playwright George Bernard Shaw was credited as saying, a good dozen years after he died. That quotation has also been attributed variously to writer Oscar Wilde and poet Robert Frost, but perhaps one of them nicked it from Father Conefrey when he wasn't looking. Had Cloone's most famous parish priest been present in Meeting House Square for the third edition of DWJ he would have struggled to equate the rather diverse music on offer with that which so upset the Irish Church in 1934. He would, however, no doubt have been delighted to learn that dancing has practically no part in modern jazz culture. These days, jazz may move heads and toes, but bums are usually firmly rooted to quite comfy chairs.

Reduced from three evenings to two, DWJ may have downsized in terms of the number of bands showcased but organizer Gerry Godley and his Improvised Music Company's commitment to showcasing the best of Dublin's vibrant jazz/creative music scene remains intact. And the crowd has grown, with attendance visibly up from last year—an encouraging sign that there's arguably a growing appetite for this sort of music.

First up on Saturday evening was the Tommy Halferty Trio. Derry guitarist Halferty, a veteran of the Irish jazz scene since the late 1970s studied with Irish guitar legend Louis Stewart and over the years has performed with singer Norma Winstone, saxophonist Lee Konitz, guitarist John Abercrombie and pianist Martial Solal, in addition to leading his own groups. Halferty, with bassist Dave Redmond and drummer Kevin Brady was showcasing tunes from his new album, Burkina (2014), recently launched at BelloBar .

On the bop-inflected "D42" and "Airflight," the trio played with the sort of tight-but-loose intensity of drummer Ginger Baker's 1990s trio with guitarist Bill Frisell and bassist Charlie Haden. "Algiers De Blanche" was an elegant, slower-paced number with a lovely, meandering solo from Halferty. Redmond, whose recent Roots (Fresh Sound New Talent, 2013) was one of the outstanding Irish releases of last year, followed suit with an equally lyrical solo.

Halferty's lyricism and melodic soloing belongs to the school of Stewart or Belgian guitarist Philip Catherine, but there's greater fire in his playing reminiscent at times of guitarist John Scofield and Sco's catchy "Everybody's Party" was indeed a perfect fit for Halferty's more aggressive playing. An older tune, whose titled was lost in translation, revolved around Redmond's fast-walking bass and saw another great solo from Halferty. Hopefully, Halferty's trio will find the means to take this music around Ireland, for there surely aren't many better jazz guitar trios in the country.

After the Tommy Halferty Trio the jazz element of DWJ was served up in various guises. OKO, the electro-acoustic quartet of guitarist Shane Latimer is a fairly new band, but its debut recording I Love You Computer Mountain (Diatribe Records, 2014) already points to a creative unit brimming with ideas.

"Shoehorns and Axelgrease" opened the set with drummer Shane O'Donovan on mallets and minimalist touches from turntabalist/sampler DJackulate's and keyboardist Darragh O'Kelly creating a dreamy soundscape. Spoken word tapes filtered through the mix as a dub beat took over. Sci-fi sounds and busy drums became more prominent as the music swelled, providing the backdrop for O'Kelly's mazy solo.

It's pointless trying to stick a name on music that rides in the slipstream of so many stylistic influences; ambient chill-out, hip-hop, dub, electronica, funk, psychadelia and jazz-fusion are all there. On the final number, with DJackulate on saxophone and O'Kelly stretching out on guitar-synthesizer the heady musical brew conjured the very best prog-cum-space rock fantasy.

The first vocal music of DWJ came with DFF, the new band of guitarist/vocalist Dave Flynn. Featuring cellist/co-vocalist Vivienne Long, Congolese guitarist Niwel Tsumbu, Aidan Dunphy on drums, Cion O'Callaghan on percussion and Dan Bodwell on double bass, DFF's sophisticated pop tunes were bursting with colors from around the world. DFF has created a a stir in its short lifespan, garnering glowing reviews from Hot Press and the Irish Times, not to mention an invitation from President Michael D.Higgins to perform at the Presidential Summer Garden Party.

Sunny tunes like "Mad for You" and "Phantom Blues" sounded like soundtracks for summer, with memorable melodies, Flynn and Long's close harmonies, toe-tapping/danceable grooves and Tsumbu's free-wheeling, celebratory soloing. Percolating percussion and laid-back strumming announced "Stonewalls," another tremendously catchy pop anthem, which grew to a rousing finale. "The Mad Magician" displayed the lyric guile and melodic charm of a Paul Simon tune.

A West-African vibe colored the final track, with Tsumbu's most expansive solo evidence of a truly exceptional guitarist—something they've known in Ireland for the past decade. At song's end a signal came telling the band they had two minutes left. Had the warning come earlier Tsumbu could have pushed out the boat even more, but as it was, Flynn introduced the musicians once more before they exited the stage.

Brass bands are all the rage these days—almost as much in fact as the banjo-and-beard-driven Appalachian bands that are taking over the planet. Leading the way from the States are New Orleans' Hot 8, Chicago's Hypnotic Brass Ensemble and the New York Brass Band, but Dublin's very own Booka Brass Band's energizing set at Meeting House Square proved that it can also blow hot and get a serious groove on.

With tuba carving tireless bass riffs, two trumpets, two saxophones, two trombones and a drummer played a lively, eclectic set that scored a hit with the crowd. Just as in the good old days when jazz was popular music, the Booka Brass Band's repertoire drew from contemporary pop culture, that's to say R&B and hip-hop. The crowd rose on cue to the Beyonce/Jay Z hit "Crazy in Love," sang to ska-colored version of Destiny Child's "Survivor" and, in a mis-en-scene that would have had Father Conefrey clutching his rosary beads in apoplectic fury, belted out as one voice the famous chorus to The Blood Hound Gang's "The Bad Touch" ("You and me baby ain't nothin' but mammals...) In a way, it's little different to Keith Jarrett's Standards Trio giving the crowds a little of what they know. The knowing applause at any rate is the same.

With a slot at Glastonbury 2014 looming, The Booka Brass Band has come a long way in the short time since its inception in November 2012. No doubt, a hard work ethic explains a lot of its success as the band has gigged all over Dublin—and indeed Ireland—building a fan base, despite the fact that most of them are full-time students. The work has paid off, with the band's debut headline gig at the Button Factory a sold-out triumph. With the band's debut CD on the horizon things are looking good for the Booka Brass Band.

Closing the first night of Down With Jazz was the quartet Alarmist, whose precise rhythms and quasi-orchestral approach to music offered a cerebral alternative to the music that had gone before. Two drummers is a rarity in any genre of music but it's a fundamental element of Alarmist's sound. On the up-tempo "Aztec Dreams," hard groove rubbed shoulders with pop melody and a precision in the double keyboard/guitar orchestration reminiscent of King Crimson. Math-jazz? Even Alarmist might struggle---should they care enough—to hang a name on its music, but it can write a catchy tune as the delightful "PG Films" demonstrated. If instrumental music weren't all but banished from commercial radio this could be a summer hit.

"Pal Magnet," the title track of Alarmist's second EP combined prog-rock intricacy with less complicated rhythmic drive and a melodic pop sensibility. In Alarmist's multi-layered sound there were the roots of all kinds of influences, from electronica and synth-pop to alt-rock and tropicana. Yet as eclectic as the music was, it never failed to groove. Alarmist provided the biggest surprise of Down With Jazz, demonstrating that instrumental music can be challenging and accessible at one and the same time.

Day two of DWJ began with guitarist Chris Guilfoyle's sextet Umbra. With members scattered across Europe and America, Umbra was playing its first gig in almost a year but there were few signs of rust in a vibrant set of original tunes. With drummer Matt Jacobsen, bassist Barry O'Donoghue and keyboardist Darragh O'Kelly laying down wonderfully elastic grooves, the twin attack of soprano saxophonist Chris Engel and tenor saxophonist Sam Comerford—exciting players of contrasting styles—carved out meaty solos while Guilfoyle, for the most part, was content to comp and direct the music.

Rhythmically and harmonically, tunes like "Return Address" "Three Moths" and "Mathematicaster" belong very much in the realm of contemporary jazz, with the saxophones enjoying a freedom usually associated with more avant-garde forms of jazz. Guilfoyle impressed with a patient, yet fluid solo on "Mathematicaster" and again on the final number—which featured a thrilling back-and-forth between the two saxophonists—but even in the midst of the most exuberant solos a pronounced sense of collective groove held sway. Band members' respective sojourns in Switzerland, Belgium and America may prevent Umbra from gigging much in the short term but it would be a shame if this exciting sextet didn't engineer geography and time to document its original material on CD.

Ireland's loss was London's gain when Dublin singer Lauren Kinsella upped sticks and moved across the pond in 2010. In a short space of time Kinsella has won many admirers and earned rave reviews for her adventurous, captivating singing. Recently Kinsella won the Kenny Wheeler Jazz Prize, awarded annually to a graduating student of the Royal Academy of Music. Panel judge Evan Parker remarked upon Kinsella's "range and depth of expression," and besides the recognition the prize included the recording of an album on the fast-rising Edition Records, due for autumn 2014 release. That album will be with Kinsella's quartet Blue Eyed Hawk and if its DWJ performance was any indication, then the forthcoming CD is really something to look forward to.