Peter Edward 'Ginger' Baker found his way into the Rock 'n' Roll Hall of Fame by playing the drums with a degree of proficiency and expression matched by few others. He first gained fame in the late 1960s with Eric Clapton and Jack Bruce as Cream, a now-legendary band that infused blues and jazz into rock and roll, producing an original and deeply textured sound. In its two-year existence, the English trio sold over 15 million records and played to adoring crowds and critical acclaim. Baker had much to do with the band's success—and likewise much to do with the band's demise.

Baker began as an aspiring jazzman and found himself a rock demigod. His brisk, purely businesslike approach caused him problems with his fellow musicians, and drug dependency cast a dark shadow over his career and his relationships. But since the late 1980s, the 50-year-old-plus father of three has straightened out his personal life, rekindled his interest in jazz, and enjoyed several successful solo and ensemble projects.

Born the son of a bricklayer, Baker dreamed as a youth of athletic rather than musical greatness. At the age of 15, he was a champion cyclist, winning a club title and courting aspirations of further success. But music eventually captured his attention. His first instrument, the trumpet, was soon replaced by a pair of drumsticks. Early on, Baker hoped to become a jazz drummer, playing on London's traditional jazz scene in the late 1950s and early 1960s.

Baker's after-school hours were spent jamming with noted jazz musicians Acker Bilk and Terry Lightfoot, as well as sitting in with several others. The bebop sound was his early focus. "When I was at school, I was listening to Max Roach, Philly Joe Jones, Art Blakely, Elvin Jones. Then I was in a trad jazz band, and they wanted me to play the Baby Dodds parts, so they gave me all these records to listen to. That was a complete revolution to me, 'cause all of a sudden you can see where Max and these guys came from. That had an enormous effect, which still comes out," Baker told Musician.

Baker's early experience with bebop and traditional jazz honed his technique and helped him acquire an impeccable sense of rhythm. His energetic phrasing makes him more than a timekeeper, giving him more creative impact than many drummers—jazz or otherwise. He told Down Beat, "When Philly Joe Jones heard me play in London, he came up to me and said, 'Man, you really tell a story when you play.' That's the biggest compliment I've ever had, because I loved Philly Joe Jones. Playing drums is the same as playing a horn. You're saying something musically."

Baker's experience with jazz and R&B brought Cream to unknown levels of musicianship and technical ability in the rock world. Baker and Bruce provided an intricate, blues-oriented rhythm for Clapton's guitar work. Of Clapton, Baker commented in Musician, "Man he used to just go for it. Incredible things were happening, time-wise. The first time we got together, we played for hours and hours. No two gigs were ever the same." Though the band formed in 1966 with immediate success, tension between members would force their split-up just two years later.

Baker developed a fondness for heroin early in his career, and this mounting addiction expedited Cream's end. "I was an evil person back then.... I was a junkie and didn't know fear," Baker told People. Jack Bruce and lyricist Pete Brown wrote most of Cream's material, while, much to Baker's chagrin, Clapton was generally regarded as the band's frontman. "What really riles me is that most people thought that Cream was Eric Clapton's band. Not only do I not get much financial reward for the whole thing, I don't get any credit from either of the other two, which is really why I don't speak to them very much," he noted in Down Beat.

Clapton and Baker remained together for another project, Blind Faith. Together with Steve Winwood (guitar, vocals, and keyboards) and Rick Grech (bass), Blind Faith formed in 1969, debuting before 100,000 fans in London's Hyde Park. A huge-selling album prompted European and American tours. Dissension in the band and Baker's growing substance abuse problems caused a split that same year, though not before the group scored two hits in the States, "Can't Find My Way Home" and "Presence of the Lord." Concerning the demise of Blind Faith, Baker explained to People, "I got messed up with drugs again and had a long holiday to get straight. When I got back to England, Steve told me Eric had run off to form Derek and the Dominos."

After Blind Faith, Baker formed Ginger Baker's Air Force, a big band complete with horns, percussion, and a few woodwinds. The jazz-rock ensemble recorded two albums with various lineups and limited success. Notably, the band showcased Baker's growing interest in African music; he even invited African percussionists to join them for guest performances. Ginger Baker's Air Force disbanded when acclaim and interest waned. In the wake of his musical setbacks, the drummer once again struggled with his addiction to heroin and his ongoing business troubles.

Chief among Baker's financial downturns was a recording studio he financed near Lagos, Nigeria, the first professional recording studio in West Africa. Baker moved to Nigeria and opened the studio after visiting Africa with Air Force percussionist Remi Kabaka. The venture turned sour, and Baker returned to England, though not before Paul McCartney recorded his hit album Band on the Run there in 1973.

Back on British soil, Baker joined up with the Gurvitz brothers, Paul and Adrian, to form Baker-Gurvitz Army. The group put out two jazz-rock records before disbanding. Though Baker worked on several projects with other musicians, including Atomic Roosters, Hawkwind, and Ginger Baker's Nutters, results were generally discouraging.

A downward spiraling career and personal misfortunes sent Baker deeper into heroin addiction. Tax troubles with the English government combined with drug use sent him to Italy in 1982 to recuperate. After settling in a small village in southern Italy, Baker worked on an olive farm and rarely played the drums. Music became less important while he shook his heroin habit. "I had to get out," he told the Boston Globe of the London scene. "All the people I knew were junkies. If I had stayed I was going to wind up dead." Two years passed while Baker learned to live drug-free. His recovery was not easy—with as many as 29 relapses by his own count—but it was ultimately successful.

While in Africa, Baker picked up the sport of polo and has since been an avid practitioner. His love for the game was a significant factor in his decision to leave Italy, where polo was not a popular sport. After a brief stay in England, Baker left for the United States in the mid-1980s. His first stop was Los Angeles, where he operated a drum school and pursued music for the first time in nearly a decade. Since he had arrived on American shores without strong musical contacts, Baker's agent suggested he place an ad in the music section of a trade journal to meet other musicians. While Baker himself was wary of the plan, it proved a success. Baker returned to the studio and appeared on Album by Public Image Ltd. in 1985 at the insistence of producer Bill Laswell.

Baker rejoined forces with ex-Cream bassist Jack Bruce in 1989. Their jazz-rock collaboration was capped by an album and a tour. In addition to guest appearances with alternative acts such as Primal Scream, Baker brought new vigor to a career in jeopardy with solo efforts such as Horses and Trees and Middle Passage. Also at this time, Baker began to work with bassist Chris Goss and guitarist Googe under the name Masters of Reality. Going Back Home, a jazz record released in 1994 with Bill Frisell and Charlie Haden together as the Ginger Baker Trio, confirmed his mastery of the drums.

Baker's notoriety was cemented in 1993 with Cream's induction into the Rock 'n' Roll Hall of Fame. The ceremony including a much-anticipated reunion with Clapton and Bruce to play "Sunshine of Your Love" and other legendary Cream songs, the first and only Cream reunion as of 1995. Baker has since relocated to Colorado, competing in polo matches whenever possible and tending his horses on a small farm outside of Denver.

Musically, Baker engaged in a project with Jack Bruce known as BBM (Baker, Bruce, and guitarist Gary Moore), while furthering his jazz interest with the Ginger Baker Trio. Free from drugs, he has become an in-demand musician, surprising his critics—many of whom predicted he would die an early death. With respected recordings deftly showcasing his jazz sensibilities, he reentered the spotlight in the early 1990s. 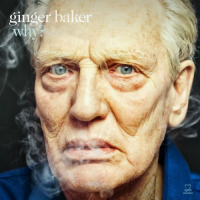 All About Jazz musician pages are maintained by musicians, publicists and trusted members like you. Interested? Tell us why you would like to improve the Ginger Baker musician page.