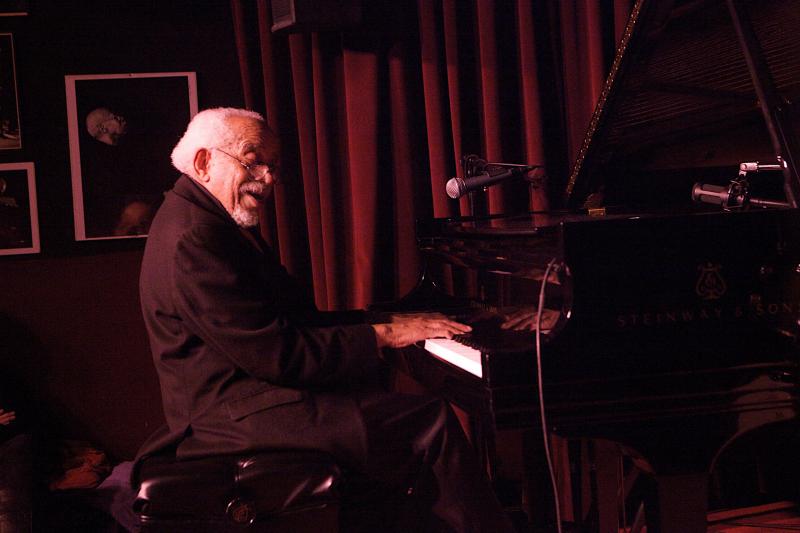 Ambling in from the back of the room, Barry Harris introduced his trio to the crowd at the Village Vanguard as the musicians filed in ahead of him: Ray Drummond on bass, Leroy Williams on drums, and then he announced, with a wink, "I'm Barry Johnson." Of course, everybody in the audience was well familiar with the name of the living legend they were there to see.

One of the great early disciples of Charlie Parker, Dizzy Gillespie, Bud Powell, and Thelonious Monk—the latter a close friend—Harris isn't simply a keeper of the flame of bebop; he's one of the great exponents of classic jazz. He's toured or recorded with Cannonball Adderley, Dexter Gordon, Coleman Hawkins, Lee Morgan, and a host of others, in addition to leading his own groups for decades. And he's been one of the great teachers in jazz, too—from the time he was a young man in Detroit, when a slew of his contemporaries studied with him, including Yusef Lateef, Joe Henderson, and Kirk Lightsey. In recent years, he's lectured at colleges and universities around the world, and he continues his teaching today in weekly workshops at the Lincoln Square Neighborhood Community Center in Manhattan.

Six weeks past his 84th birthday, Harris was making another of his occasional extended visits to the Vanguard, playing two sets nightly from Tuesday through Saturday, drawing a full room for the early show on Wednesday night.

The set kicked off with a bit of a surprise: not an old bebop chestnut, American songbook classic, or even a Barry Harris original, but "Isn't She Lovely" by Stevie Wonder. Harris added some new dimensions to the tune, alternating choruses of rich, dense chords and quiet, spare playing. "That's just to show you that we can play those songs, too," he said.

A medium up tempo "Somebody Loves Me" was a particular highlight of the set, Harris taking a three-chorus improvisation that almost seemed like a lesson on how to build a solo, with speedy, long-phrased turn-around sections at the end of each chorus, clearly displaying his Bud Powell influences. Ray Drummond followed with an especially facile two-chorus bass solo, almost never taking his eyes off the leader, and Leroy Williams was featured to good degree, too, trading fours with Harris before the trio closed out the tune. An up tempo rendering of "Sweet Georgia Brown" was another special moment, a feature for Williams that included a very Monk-like intro by Harris and which was followed by a nicely contrasting slow blues.

Three of the tunes in the set were dedications: "I Want to Be Happy," for his doctor, who was in the house, "I'll Keep Loving You," for everybody in the audience, and "To Duke with Love," a Harris tune played very rubato with lots of chromatic movement, which also incorporated Duke Ellington's "Prelude to a Kiss."

For the penultimate number, Harris started suggesting that the audience join him in making up a tune—a nice novelty he often features in live performances, based on random numbers—but a friend called to him to play a Latin tune, so he jumped into "All the Things You Are," first playing a new variation on the standard bebop intro before launching into a very Latin first chorus, ultimately followed by a wide-ranging bass solo that showed off Drummond's exceptional musicianship. The set ended with another Harris original, featuring vocals and hand-clapping from members of the audience well familiar with the tune—students from Harris's weekly workshops, no doubt.

Throughout the set, Harris's playing reflecting a good deal of humor, nostalgia, and romanticism, along with reverence for the other masters who've come before him. For those who can't make his next live show, there are plenty of recordings available. For some vintage trio work, one place to start is Barry Harris Live at the Jazz Workshop (OJC, 1969). Recent live recordings include Barry Harris Live at Rennes (Plus Loin, 2010) and NPR's webcast from his 2009 appearance at the Village Vanguard. And, of course, there's the disc on many jazz fans' "desert island" lists that prominently features Harris in a sideman role, Lee Morgan's 1964 Blue Note classic, The Sidewinder.