By John Kelman
February 7, 2012
Sign in to view read count 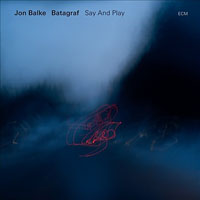 He may be nowhere near a household name in North America, but elsewhere— in particular in his native Norway—pianist Jon Balke's influence continues to grow. That he's better known for the music he writes—and the contexts in which he delivers it—shouldn't be taken as a negative, either; only that, with projects like the brass-heavy Oslo 13, chamber-tinged Magnetic North Orchestra and culturally and stylistically cross-pollinated Siwan (ECM, 2009), the collaboration-minded Balke simply doesn't opt for contexts where his own playing is front and center. Even a solo piano project like Book of Velocities (ECM, 2008), where he's as exposed as he'll ever be, remains emphatically diverted from Balke the pianist, and is more about Balke the conceptualist.

When he introduced Batagraf with Statements (ECM, 2006), Balke pushed the percussive component that's driven much of his work to a central position, but with a new methodology: the nexus of percussion and language, as explored by a cast of singers, reciters and percussionists that also included trumpeter Arve Henriksen and saxophonist Frode Nymo. Say And Play continues to mine that vinculum of cadence, but with a pared-down quintet that leaves Balke the sole melodic instrument amongst two percussionists, one vocalist and a poet who reads his own work on four tracks.

Balke has become the melodic/harmonic focal point by necessity, yet Say And Play remains largely about the big picture, despite a pointillistic approach brought into sharper detail. The lulling electric piano foundation at the start of "Everyday Music" gives way, almost idiopathically, to unexpected detail as Balke layers his keyboards, punctuated by Helge Andreas Norbakken's talking drum, constructing a growing improvisational mélange.

Say And Play's core group may be small—Balke, drummer Erland Dahlen (Nils Petter Molvaer, Eivind Aarset, Sonic Codex) and vocalist Emilie Stoesen Christensen (daughter of legendary Norwegian drummer Jon Christensen, with whom Balke collaborated in the 1980s in Masqualero)—but its purview is most certainly not. Christensen delivers Balke's stream-of-consciousness lyrics with interpretive elusion on "Riddle #1," bolstered by a paradoxically frenetic yet understated mesh of percussion and Balke's simple chordal pattern, while her singing on the more eminently propulsive "Riddle #2" is more structured, driven by Dahlen's astute ability to propel without resorting to predictable pattern.

Parts of Say And Play even approach song form in ways that Statements did not, with Christensen's wordless vocals on the lyrical yet structurally elliptical "Azulito" a lovely sign of promise yet to be fulfilled. And if poet Torgeir Rebolledo Pedersen's words on the minimalism-informed "Hundred-Handed" will be indiscernable to the Norwegian-challenged, it's their very cadence that makes them nonetheless compelling.

Norbakken has been the rhythmic heart of every Balke ensemble recording for ECM since Diverted Travels (2004), and while Balke remains Batagraf's near-exclusive composer, there's little doubt that the percussionist is a primary instigator of its unique exploration of patois and pulse. If Statements was, indeed, a statement of intent, the capitalized "And" of Say And Play bears similar significance, as Balke, Norbakken and the rest of Batagraf paint a musical big picture where the whole transcends the aggregation of its inestimable parts.