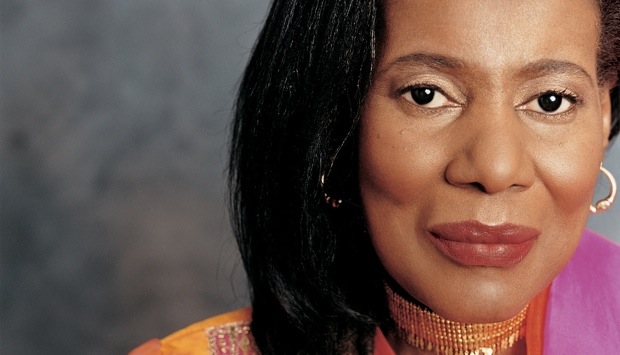 By Chris May
October 27, 2011
Sign in to view read count
The launch of Impulse! Records' 2-on-1 reissue series—which packages two original LPs on one CD—includes six key albums from the glorious first flowering of the astral jazz forged by pianist and harpist Alice Coltrane and saxophonist Pharoah Sanders on Impulse! towards the end of the 1960s.

The style emerged following saxophonist John Coltrane's passing in 1967, when Alice Coltrane and Sanders—both members of John Coltrane's later groups—repositioned at center stage the African and Indian percussion instruments and song forms with which John Coltrane had colored his music during his final years. They married these with hummable melodies, trance music-informed ostinatos, ambient-rich improvisations and, on Alice's albums, harp. The Indian drone instrument, the tamboura, a stripped-down version of the sitar, was emblematic, as were chanted, often wordless, vocals.

Astral jazz continued in full bloom until the mid-1970s, when, in hands other than those of Coltrane and Sanders, it degenerated into cliché and, ultimately, into a blissed-out sub-genre of the fusion movement.

The 2-on-1 reissues are Coltrane's Huntingdon Ashram Monastery (1969), Universal Consciousness (1971), World Galaxy (1972) and Lord Of Lords (1972), and Sanders' Wisdom Through Music (1972) and Village Of The Pharoahs (1973). All these albums have previously been rereleased, but their availability has been patchy and often on relatively expensive, limited editions.

Unlike some of the tackily produced reissues which have been visited on the Impulse! catalogue by a succession of corporate owners since the 1970s, the 2-on-1 series has been put together with care. The LPs' original gatefold sleeves are not used, but they are reproduced in their entirety in the 12-page booklets included with the discs. You may need a magnifying glass to read the original, lengthy liner notes for the Coltrane discs, but read them you can (and it is worth the trouble).

As most of the original LPs had playing times of just over 30 minutes, there is no problem with putting two of them on one disc, although why the series producers have not programmed them all chronologically is a bit of mystery.

Given such wonderful music, it is a mystery we can live with.

Like its predecessor, Huntington Ashram Monastery was made with a trio: Coltrane on piano and harp, with, this time out, Ron Carter on bass and Rashied Ali on drums and percussion. It was originally released on John Coltrane Records, the short-lived label Alice formed primarily to issue previously unreleased recordings by her late husband. Legal ownership of this material belonged to Impulse!, and following discussions with producer Bob Thiele, JCR was sympathetically absorbed by Impulse!. Coltrane retained artistic control, while Impulse! put its packaging, marketing and distribution skills behind the albums.

Aside from the funky, gospel-tinged closing track, "Jaya Jaya Rama," based on a Hindu devotional chant, Huntington Ashram Monastery suggests rather than delivers astral jazz. The track titles are redolent of Hindu mysticism (except for "IHS, which stands for "I Have Suffered"), ostinatos are present, three of the six tracks feature Coltrane on harp, and Ali is heard on bells and wind chimes in addition to kit drums. But the root of the music is straight-ahead. In her liner notes, Coltrane wrote that she was especially pleased with Carter's playing, noting that he was "harmoniously attuned to higher chord progressions," and implying that he reconnected her with a tradition going back to her first influences on piano, Bud Powell and Thelonious Monk.

It is a beautiful, sumptuous album, but the full-on astral experience comes with World Galaxy. This was Coltrane's second outing with strings, following Universal Consciousness (reviewed below). On Universal Consciousness, Coltrane collaborated with Ornette Coleman on the string arrangements. On World Galaxy she went alone, and revealed a style of her own—in ambience part Indian, part Japanese and part Hollywood Western soundtrack. You love it or you loathe it, there seems to be no middle ground. Loathers were, and still are, incensed by the album's closing track, a rearrangement of "Acknowledgement" from John Coltrane's A Love Supreme (Impulse!, 1965). Coltrane's guru, Swami Satchidananda, contributes a spoken introduction and coda, and the arrangement, which includes Coltrane on heavily processed Wurlitzer organ and a violin solo by Leroy Jenkins, is less "jazz" than acid-rock (without the guitars).

Elsewhere, Frank Lowe adds vocalized tenor and soprano saxophone vignettes, there are snatches of distorted sound and backwards running tape, and, always, those strange, otherworldly strings. Coltrane herself is heard on harp (four tracks), organ (three tracks) and tamboura ("A Love Supreme"). She plays piano on "Galaxy Around Olodumare" only. The heavyweight bass and drums are provided by Reggie Workman and Ben Riley, augmented on some of the more dramatic passages by tympanist Elayne Jones.

Universal Consciousness and Lord Of Lords are respectively the first and the third albums Coltrane made with strings for Impulse!. And like the better known Ptah, The El Daoud and 1971's Journey In Satchidananda (like Ptah featuring Pharoah Sanders), they too come with the full panoply of astral jazz signature elements: hypnotic ostinatos, swirling harp glissandos, trippy Wurlitzer, chanted vocals, tamboura, bells and chimes. The foundations are provided by bassist Jimmy Garrison and drummers Jack DeJohnette, Clifford Jarvis and Rashied Ali (on Universal Consciousness) and bassist Charlie Haden and drummer Ben Riley (on Lord Of Lords).

On Universal Consciousness, Coltrane uses strings on three tracks (arranged in collaboration with Ornette Coleman). Two other tracks are duets with Ali, and one is by the trio of Coltrane, Garrison and Jarvis. The first two tracks (including the with-strings "Universal Consciousness") are, unusually for Coltrane in this period, up-tempo and urgent. The remaining four (including the with-strings "Oh Allah" and "Hare Krishna," which also feature tamboura player Tulsi) possess Coltrane's characteristically serene feel.

As noted above, Coltrane's string arranging style was not fully formed on Universal Consciousness, but passages on "Hare Krishna" hint at the splendors that would come with World Galaxy and Lord Of Lords.

It is worth getting the magnifying glass out for the liner notes, on which Coltrane writes revealingly about the spiritual influences informing her music at the time: Hindu, Christian, Zoroastrian, Buddhist, Taoist and Islamic.

And keep the glass out for Lord Of Lords, which features a string orchestra on all five tracks. About the genesis of track three, which uses rearranged excerpts from The Firebird by Igor Stravinsky (1882-1971), Coltrane writes: "On March 20, 1972, I was blessed with the good fortune of receiving a visitation from the great master composer...After a warm and intimate discussion on the subject of music, he said, 'I wanted you to receive my vote....'" Stravinsky goes on to hand Coltrane a vial "of clear, colorless liquid," which, like her namesake in Lewis Carroll's Alice's Adventures In Wonderland, she swallows.

It is easy to sneer at Coltrane's belief system, but she was sincere in her views, never tried to force them on to other people and, most importantly for us, was inspired by them to create some of the most uplifting jazz of her era. Like The Firebird itself, most of Lord Of Lords is gigantic in conception, a quality well set off by the closing tune, the wistful gospel song "Going Home" (better known to many people via the composer Anton Dvořák, who used it in the "Largo" of his New World Symphony).

Not so much astral, as galactic jazz.

Unlike Alice Coltrane, who passed in 2007, tenor and soprano saxophonist Pharoah Sanders, born in 1940, is still with us, still recording and still commanding the concert stage (check the YouTube clip with bassist Bill Laswell's Axiom group below). A regular collaborator with Coltrane in the late 1960s and early 1970s, his Tauhid was in 1967 the first fully formed astral jazz LP.

Sanders is most widely known for the album Karma (1969) and its hit track, "The Creator Has A Master Plan," which took up the first side of the original release. But his Impulse! albums were consistent in quality, and Village Of The Pharoahs and Wisdom Through Music, sequenced here in reverse chronological order, deserve to be heard every bit as much.

Unlike Sanders' other Impulse! albums, which were produced by either Bob Thiele or Ed Michel, 1972's Wisdom Through Music was produced by Lee Young, the brother of saxophonist Lester Young. Lee had for close on ten years been the musical director of singer and pianist Nat King Cole's group; on leaving Cole, he worked as an A&R man and producer for Vee-Jay and Impulse!, before becoming a senior executive with Motown. It is an interesting genealogy, but Young did an underwhelming job on Wisdom Through Music, which has a rather muddy sound, one that does the vocals, in particular, no favors.

The music, however, is sublime. The romping "High Life," which opens, establishes the album's mood, which is upbeat and celebratory. Sanders' vocalized saxophones are at their most vibrant (standouts are his tenor on "High Life" and soprano on "Selflessness"); in addition to Norman Connors on drums, there are three percussionists, including Mtume and Badal Roy; James Branch adds some pretty flute; and someone is playing, it sounds like, a sitar in tamboura-style (or a tamboura in sitar-style, it is hard to tell which) on the title track and "The Golden Lamp."

Village Of The Pharoahs, released in 1973, comes from three separate sessions, with a September, 1973, date producing the core album: the three-part title track together with "Myth," which follows, and the closer, "Went Like It Came." On these tracks Sanders (who plays soprano except on "Went Like It Came," where he uses tenor), is accompanied by a percussion and tamboura-rich band, which also includes pianist Joe Bonner, bassist Calvin Hill, drummer Jimmy Hopps and singer Sedatrius Brown, whose gospel-inflected style sets off, and resonates directly with, the more "exotic" spiritualism which pervades "Village Of The Pharoahs" and "Myth."

"Village Of The Pharoahs Parts 1-3" and "Myth" actually comprise one unbroken track, whose division into four parts is on paper only and down to an initiative by producer Ed Michel: he realized that Sanders would increase his royalties if he billed his often side-long tracks as shorter, "separate" titles. "Went Like It Came" is lighthearted hard bop given a gospel flavor by Brown's vocals. It has an impromptu vibe which suggests it was added to the session to fill out unused studio time.

The remaining tracks, "Mansion Worlds" (recorded in 1971) and "Memories Of Lee Morgan" (1972), present Sanders in front of smaller groups including drummer Norman Connors and twin-bassists Cecil McBee and Stanley Clarke. "Mansion Worlds" includes a strong duet by the bassists, "Memories Of Lee Morgan" features a duet by Sanders, on soprano, and Garth Webber on flute.

Two brilliant albums which deserve to be more widely heard—and there is plenty more astral Sanders on Impulse! which, it is to be hoped, will be reissued in any future 2-on-1 batches.