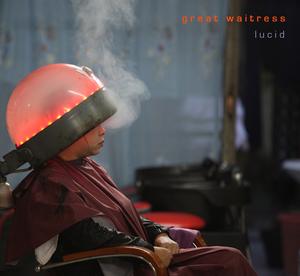 In January 2009, Berlin-based pianist Magda Mayas played with the Australian duo of accordionist Monika Brooks and clarinetist Laura Altman at Sydney's Now now Festival. At the start of 2011, the three came together—by now under the name Great Waitress—to again play the festival plus some other gigs before recording Lucid at Sydney's Linear recording studio, on February 8th .

Despite the collective group name, this album is most welcome as an addition to Mayas' growing discography. As on her recent releases, the solo Heartland (Another Timbre, 2010) and her duo with saxophonist Christine Abdelnour Sehnaoui, Teeming (Olof Bright, 2010), Mayas demonstrates that she is a complete pianist, extracting an astonishing range of sounds from all parts of the instrument. Away from the keyboard, her playing goes way beyond normal "inside" or "prepared" piano as she plucks, strums or vibrates the strings with wire, strikes or scrapes the frame of the piano creating rich resonances.

In contrast to Mayas, Brooks and Altman are far more restrained and not as prominent. Whatever music the combination of clarinet and accordion conjures up in the imagination, it is highly unlikely it will match that produced here. When it is identifiable amid the range of sounds, the clarinet is rarely to the fore, tending to favor sustained notes that contribute to the overall ambience. The accordion is identifiable less often, producing wheezy rasping sounds rather than any that are characteristic of the instrument; again, the intention seems to be a contribution to the ensemble sound. But the piano repeatedly attracts attention, as Mayas pushes at its boundaries. The contrast between the duo's restraint and the more garrulous piano playing creates a dynamic tension which drives the music.

Of the album's five tracks, the twenty-minute title track is the centerpiece, its prolonged opening section featuring Mayas' striking high notes, offset by higher frequency whines from clarinet, with the two effectively merging into a cohesive whole that slowly evolves. In its middle section, Mayas moves to playing inside the piano, producing resounding lower frequencies that are very dramatic, followed by a passage where all three players interact well, with some of the individual sounds being difficult to attribute to any one instrument. Although the instruments are solely acoustic, some of the tones occasionally mirror electronic tones. The entire album stands up well to repeated playing, but this track alone more so than the rest.

On the evidence of YouTube, Great Waitress is best appreciated when the contributions of all three players can be clearly seen and identified. If they were to achieve a more equal balance between the sounds of the three instruments, then they could unlock more of the group's potential. Until they do so, Lucid is a plenty good enough place to start.