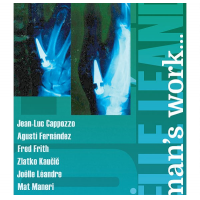 How do you sum up the career of an improvising artist like Joëlle Léandre? Do you reissue a package of recordings from her 40 years of performance? That is probably not possible, given the multiple labels and the location and ownership of the masters. Besides, free improvisation, almost by definition, dissipates (or probably should dissipate) upon performance. Recordings contain only a fraction of the whole experience. When it comes to Léandre's oeuvre, total immersion in her music is the only way, apart from experiencing her perform, to get a sense of her presence on the bandstand. She is a performer who commands the same attention as her peers Peter Brötzmann, Joe McPhee, and Anthony Braxton.

Born in Provence, she studied with John Cage, Morton Feldman, and Giacinto Scelsi. Her adoption of free improvised music found her in the company of Derek Bailey, Anthony Braxton, Lol Coxhill, and George Lewis. More importantly, she found her contemporaries in the bassists William Parker, Barry Guy, Barre Phillips, and Peter Kowald. Like her fellows who have had significant retrospective boxsets, Kowald's Discography (Jazzwerkstatt, 2014), and the documentation of Parker's early works Centering: Unreleased Early Recordings 1976-1987NoBusiness, 2012) and Solo Bass: Crumbling In The Shadows Is Fraulein Miller's Stale Cake (AUM/Centering, 2011), this 8-CD set allows for an immersion in Léandre's music. That is, at least her activities for the past 10 years. No collection could possibly embrace the depth of her career, especially the ephemeral nature that is improvised music.

Caution. Stepping into this stream of her career is habit-forming and can lead the listener back-and-forth through her hundreds of recordings and four decades of performance.

This set kicks off with a performance by the group Les Diaboliques, a trio of Léandre, British vocalist Maggie Nicols and Swiss pianist Iréne Schweizer. Their quarter of a century collaboration is part cabaret/part improvisation. This selection of their work comes from a concert in Moscow in 2015, and the trio's feminist leanings are one display. That is, if the listener harbors any doubts as to women's role in free improvisation, a genre historically dominated by men. Listening to the strength of Schweizer's playing (cue her solo on the untitled 5th track) eliminates any doubts as to her place among modern improvisers. Maybe it is not an issue these days, okay let's pray it is not an issue these days (as it might have been in the 1960s), for these three woman to take the stage at a Company Week or Freedom In The City series. Nicols' wordless vocals and Leandre's arco bow work speak a strange and beautiful new dialect.

Disc two finds the bassist in a duo setting with violinist Mat Maneri. Recorded in Paris 2011, this is the first documentation of the pair in this setting. Together they recorded as the Judson Trio with Gerald Cleaver and The Stone Quartet with Roy Campbell and Marilyn Crispell. This two-stringed approach works well as both a gentle, alluring bowed meditation and a noisy scraping abrade-fest. Of all the discs included, this duo exhibits the greatest range between low and high ends. Maneri and Léandre developed into a perfect complement to so many artists of late, this duo begs for more performances.

Disc three finds Léandre in company of American avant-garde vocalist Lauren Newton. Recorded in Besançon in 2016, the music swoops between a wordless new language and sung lyrics. Newton has the ability to imitate both the arco and pizzicato bowing techniques Léandre employs. Highlights here include the bassist joining Newton in vocals and also the final story of an old woman trying to coax a pig home from the market, an explosive Old MacDonald song.

In November of 2015, Léandre performed with French trumpeter Jean-Luc Cappozzo. It appears this was the first time the pair have recorded together. His playing has the vocal agility of Peter Evans' trumpet mixed with the stateliness of (dare I say?) Wynton Marsalis. Under the firm bow of Léandre's hand, the pair produce an imagined soundtrack to silent movies, making this the most unanticipated of the discs.

If the Cappozzo duo was unexpected, Léandre's work with the guitarist Fred Frith is like coming home to a familiar meal. Their duets are the most casually agreeable of the eight discs. Agreeable, but not necessarily the calmest. The pair make both the most intimate and the most raucous sound here. At times they sound as if they are scoring the soundtrack for a Warner Brothers' cartoon and then they are spinning the dials on a sort of radio that flows from folk to ambient to noise.

Spread over two discs are Léandre's collaboration with saxophonist Evan Parker, pianist Agusti Fernandez, and drummer/percussionist Zlatko Kaucic. This assembled supergroup, one suspects the brainchild of Not Two records, was presented at the 2015 Krakow Jazz Festival. This session could have easily been recorded as a part of Derek Bailey's Company Week. Combining players is a tricky task, but these four are more than compatible. They are the definition of kindred spirits. They play as a quartet for two of the seven tracks, the other five are duos. Parker gets two tracks with Leandre, as does Kaucic. Léandre's magic is revealed here, especially in the duos. She has the ability, as all great bassists do, to push the sound in different directions, control the volume and emotion of the music, all done in a very covert way. Her presence looks large in the company of each musician and together in quartet.

Of course she must be presented solo in the boxset. The producer selected a 2005 Paris concert as a summing up of Léandre in this context. The five tracks present a multifaceted artist in full bloom. She plays with the same passion we hear in Barry Guy's music and creates the same energies William Parker finds. It's her vocalizations, among other things, that distinguish this performance. Because this medium is only one of sound, the physicality of her performance must be felt and not seen. Léandre is a dynamic performer, combining her inexhaustible energy with meditative quietude. These performances have a charismatic feel, even when she is riffing in French. Léandre's inexhaustible energy does create fatigue, though. It is best consumed in small doses over a long, enjoy-the-ride, long period of time.