ROY CAMPBELL, JR. (trumpeter, flugelhorn player, pocket trumpeter, flutist; composer, arranger, bandleader, educator, writer, and actor) was born in Los Angeles in 1952 and grew up in New York. His musical journey began as a child with piano lessons, initially inspired by his father, whose trumpet was the first one he used. By the time he entered high school, young Roy was playing flute, recorder, and violin, and he began studying trumpet as a high~school senior.

As a young fan, Roy met Lee Morgan at the Bronxwood Inn in the late '6O's, and in 1971 Roy began participating in Jazzmobile workshops, working with jazz masters Kenny Dorham, Howard McGhee, and Lee Morgan, as well as with Howard McGhee and Joe Newman in Jazz Interactions workshops. Later, as a trumpet major at Manhattan Community College, his professors were Leonard Goines and Dick Vance, and Roy studied music theory, arranging, and composition with Yusef Lateef, graduating in 1975 with an Associate's Degree in music.

By 1972, Roy was leading his own band, Spectrum; he had just turned 2O. He was also in great demand as a side man and studio musician. During the time from 1974 to 1976, Roy co-led with Radha Reyes Botofasina a band called the Spirits of Rhythm, which included, at various times: Omar Hakim, Rodney Jones, Kenny Kirkland, J.T. Lewis, Zane Massey, Cecil McBee, Jr., Andy McCloud, Marcus Miller, Charles Neville (of the Neville Brothers), Ricardo Strobert, Rudy Walker, Kenny Washington, and Bobby Watson.

In 1978, Roy met master bassist William Parker, who recommended him to Jemeel Moondoc, who in turnl invited Roy to join Ensemble Muntu, an association that led to many dates and tours abroad. Roy's travels and worldwide exposure allowed him to develop an international following in Europe, Japan, the Caribbean Islands, and the USA. He lived in the Netherlands from 199O to 1992, working as a freelance musician and lecturer and holding conservatory workshops. He was the leader of the Thelonius New World Orchestra in Rotterdam for two years; he played with the bands of Ruud Bergamin, Klaas Hekman, and Dennis Winter; he led a Thursday-night jam session in Rotterdam; and he also played as a side man in numerous ensembles. In this period, the Eindhoven and Groningen Festivals commissioned Roy to compose music for brass ensembles.

Yet there was a part of his creative spirit that polished musicianship alone could not satisfy. Back in the States, Roy expanded into writing and arranging music for himself and others, scoring documentaries, and composing and arranging for off~Broadway productions. He scored the documentaries “The Selling of Harlem” and “Survival in New York,” his compositions and arrangements were featured in the off- Broadway productions “Ludwig” and “Parole by Death,” and “Hughes' Dream Harlem,” a Black Star Entertainment special about Langston Hughes directed by Jamal Joseph, features Roy Campbell, Jr.'s recorded music. Roy's television credits include appearances on ABC, CBS, NBC, PBS, UPN, and cable networks, participating in interviews, new programs, and profiles. He appears in Zakariah Sherzad's Vision Festival documentary “What's All That About?” as well as several other concert films; his composition “Malcolm, Martin, and Mandela” was played during a WBAI “Democracy Now” broadcast on Malcolm X's birthday, 'O3; and Amadou Diallo's mother played Roy's “Amadou” from “Ethnic Stew and Brew” on the air during an interview in California.

In addition, Roy is an actor who has appeared in independent films and plays. He has performed with dancers including Leena Conquest, Aleta Hayes, K.J. Holmes, Maria Mitchell, Patricia Nicholson Parker, Nayo Takasaki, and others, as well as musical accompaniment for poets Umar bin Hassan (of the Last Poets), Steve Dalachinsky, Shirley LeFlore, Felipe Luciano (of the original Last Poets), David Nelson, Jilal Nazzarudin, and Eve Packer.

As a bandleader, Roy Campbell, Jr. has long maintained several stellar working units. TAZZ (with Andrew Bemkey, Chris Sullivan, and Michael Thompson) is a reflection of various musical styles, languages, backgrounds, and sources, with a mission to break down cultural barriers through a sound that is at once eclectic, progressive, polished, and funky; in a word, TAZZ is hot! Roy Campbell also leads THE PYRAMID TRIO (with William Parker and Hamid Drake), which he began in 1983 and which includes music of many world cultures with a jazz overtone. In addition, he founded the collective group OTHER DIMENSIONS IN MUSIC (with Daniel Carter, William Parker, and Rashied Bakr), which plays improvised music of all styles. In 1995 he formed SHADES AND COLORS OF TRANE (with Walden Wimberley, Hilliard Greene, and Warren Smith), a tribute band for master saxophonist John Coltrane. And in 1999 Roy added the group DOWNTOWN HORNS (with Daniel Carter and Sabir Mateen).

Roy Campbell, Jr.'s composing, arranging, and playing embrace a wide range of roots and styles, including jazz, funk, rock, rhythm & blues, hip-hop, rap, classical, reggae, and more. Whether performing, writing, arranging, or producing, Roy Campbell's abilities burst forth in an electrifying stream of talent and originality. His virtuoso instrumental performances have been praised by fans, critics, and fellow musicians alike. All of the bands he leads have inspired and uplifted audiences to spiritual heights, and each band is unique and highly acclaimed by all. Robert Innapollo, in a review from “Cadence” Magazine (January, '9O), stated, “Campbell is a monster trumpeter. He's the latest in a long line that has extended from Navarro through Brownie through Booker Little and beyond.” Program notes from the 1998 Fire in the Valley Festival praise his “approach and technique, taking the influences of both Lee Morgan and Booker Little and hauling them into the future.”

In the year 2OO1, “JazzTimes” designated Roy Campbell's CD “Ethnic Stew and Brew” (Delmark 528) number three of the top 5O jazz CD's of the year. Roy was also nominated trumpeter of the year by the Jazz Journalists' Association in 2OO2, and he will receive an award as a Harlem Unsung Hero of Afrikan~Amerikan Classical Music at the Lenox Lounge in November, 2OO3.

Roy Campbell's life experience reflects his belief that music is the voice of universal truth. His music has continued to grow throughout the '9O's and into the new millennium. His sound combines ancestral voices, modern artistry, and futuristic vision. He is a master trumpeter, musician, and being, and a universal force to be reckoned with. Show less

Connie Crothers, Band of Fire: Live at the Stone with Roy Campbell 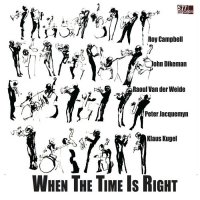 All About Jazz musician pages are maintained by musicians, publicists and trusted members like you. Interested? Tell us why you would like to improve the Franz Koglmann musician page.