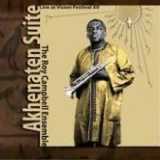 Any relationship to ethnicity or artistry that an individual advocates predisposes how that individual might be viewed from the outside, yet strength of self-perception cancels out the superficiality of any invisibly barbed labeling. Music becomes a means to translate self-perception into a language which not only transcends social divides but also can relate the story of origin.

For the 2007 Vision Festival, trumpeter Roy Campbell was commissioned to write "Akhenaten Suite," in which he paid tribute to his heritage using thematic material learned from longtime study of his mid-eastern ancestry. AUM Fidelity's live recording of the world premiere performance begins as Campbell counts out, "one, two, three...one, two, three, four" to spark the intro to a quick, evenly paced thematic statement, evoking a regal fanfare, eliciting the notion of Akhenaten, Pharaoh in the 1300s BC, whose influence on Egyptian culture forever changed it, religiously and artistically.

Campbell continues establishing the forefront with cascades of runs; he hands the main line to violinist Billy Bang, who bows out dusty, sometimes clustery tones on his violin, to sustain the core of the music. Bryan Carrott takes over from Bang, easily keeping the spring in the improvisation on the vibraharp. Hillard Greene enters on bass and solos to prolong the instrumental explication.

The music unfolds with slow, lyrical, elongated phrase repetitions that are often synchronous among all the instruments but transform into melody. Campbell blows his trumpet clearly, reaching out over the textures that the violin, vibraharp and bass weave. The constant theme he emphasizes stays on top of the low pitches coming out of the quickly bowed violin, the two eventually converging in a grand crescendo with the rest of the ensemble.

Fundamental tempo changes infuse the remainder of the suite. The violin assumes an ever-important role in the realization of the suite's electric character. Campbell takes the trumpet to impressive heights, including vibratos and high-pitched peaking. Carrot knocks out statement after statement with precision and directness on the vibraharp, working closely with Zen Matsuura, whose drumming elucidates a parallel hammering of the skins and clicking of cymbals as a constant within the music.

Campbell pays acute attention to an omnipresent rhythm to propel his story through all its phases. Bang often embodies the rhythm's impetuousness to which his lengthy pizzicato attests. The four parts of "Pharoah's Revenge" display color and voice changes, where Campbell's flugelhorn and muted trumpet alter the character of the brass; the recorder, Egyptian arghul, trombone and tuba have a say as well. Hillard Green clips along with a clean bass pizzicato solo run on the last track, "Sunrise on the Nile."

Throughout the recording, the instrumentals sometimes stray from the pulse; still, the ensemble regroups with full force as Campbell's conclusive coda demonstrates.

Overall, the music becomes a portrait of insistence. Just as Akhenaten withstood the conflict within his rule, and continued in his pursuit of cultural change, so too does Campbell's music persevere.