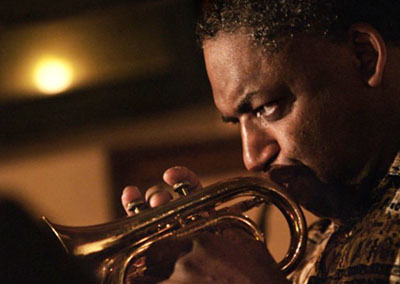 slideshow
"If there's such a thing as an unassuming tour de force, Akhenaten Suite is one."
--Bill Shoemaker, PointofDeparture.org

“Roy Campbell has composed a fully formed suite, one which is worth repeated listening sessions."
--Mark Corroto, AllAboutJazz.com

On Tuesday, March 11th, Arts for Art, Inc., in cooperation with AUM Fidelity, will release the Roy Campbell Ensemble's Akhenaten Suite (AUM045), the first in a series of three CDs documenting world premiere performances from the 12th annual Vision Festival in 2007. This series, which will also include new orchestral works by trumpeter/composer Bill Dixon and bassist/composer William Parker, is supported by the New York State Music Fund, established by the New York State Attorney General at Rockefeller Philanthropy Advisors.

Composed by trumpeter/composer Roy Campbell, a veteran of more than 30 years on the creative improvised music scene, Akhenaten Suite is a three-part, seven-track work commissioned by Arts for Art, Inc. and inspired by the life and reign of the Egyptian pharaoh, Amenhotep IV. Campbell brought this work to life on June 22nd with a new ensemble featuring fellow scene stalwarts and longtime collaborators Billy Bang (violin), Bryan Carrott (vibraharp), Hilliard Greene (bass) and Zen Matsuura (drums).

In his live review of the premiere, the New York Sun's Will Friedwald described the music as “warm and inviting, not to mention exotic and melodic in the most pleasurable way...combining elements of outside music with free-flowing late-bop against a Pan- African polyrhythm."

“The well-traveled trumpeter has long been a sonic frontiersman, embracing the universality of a sound continuum in which the Harlem-bound A Train and the majestic River Nile are moonlit reflections of each other," writes journalist Steve Dollar in the liner notes. “So it's only natural that Campbell would turn his hand to a full-on composition inspired by Amenhotep IV, Pharaoh of the 18th dynasty of Egypt, whose reign began 1350 years before the birth of Christ. The ensemble's richly textured palette provides a kaleidoscopic tapestry for Campbell's bursting runs of notes and graceful, curving romantic lines."

Critics have called Campbell “a force in modern free jazz" (Nate Chinen, New York Times) and “a gratifying and lyrical performer" (The Penguin Guide to Jazz Recordings, Eighth Edition), while also noting his “prowess as a leader and great trumpeter" (Daniel Piotrowski, JazzTimes) and ability “to coax a rich plurality of voices and sounds from the bell of his horn" (Derek Taylor, AllAboutJazz.com).

The All Music Guide's Scott Yanow adds, “Trumpeter Roy Campbell extends the tradition of Don Cherry and Bobby Bradford while borrowing now and then from Freddie Hubbard."

Campbell's esteemed career includes an eclectic discography of more than 85 recordings, as well as work as an actor, a composer/arranger for documentary films and off-Broadway plays and accompanist to a variety of dancers and poets.

Perhaps best known for his long association with Other Dimensions in Music, an all-star ensemble he founded in the early 1980's, he has collaborated with many of the music's most respected innovators, both as a sideman and in his own groups such as TAZZ and the Pyramid Trio, which will celebrate its 25th anniversary in 2008. Some of his most recent turns with other leaders can be heard on recordings by Mark Ribot's Spiritual Unity Quartet, Matthew Shipp, William Parker & The Little Huey Creative Music Orchestra, Yo La Tengo and Whit Dickey just to name a few.