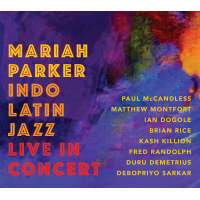 She reunites the unit for Live in Concert (Ancient Future.com Records, 2017), a collection of smartly imagined original tunes that touch on range of cultural influences but never push connections. You'd expect nothing less from a cast a master musicians whose credits range from Wynton Marsalis to Sun Ra to Bolivian pan flute maestro Gonzalo Vargas.

The cultural mix changes from song to song and often within the song. Reeds master Paul McCandless starts the opening track, "Affinity Minus One," with a passage that lightly but firmly references Indian classical music before shifting into a more Coltrane-y mood later in the song. Both cohabitate nicely with a moderately paced, not-too-spicy samba beat. Guitarist Matthew Montfort similarly does a brilliant sitar imitation at the start "Close Passage" before dialing back to a more natural timbre.

Some songs barely rack up frequent flyer miles at all. "For the Waters" and "Torredembarra'' are both well-constructed contemporary jazz tunes firmly rooted in North America, the former highlighted by a dreamy, evocative piano mediatiation by Parker. The band takes a harder turn into Latin territory with "Jaguar Dance,'' highlighted by Parker's energetic chording and percussionist Brian Rice's tasty rhythmic concoctions.

The group makes its boldest cross-cultural stand with "Sangria," which combines McCandless's Indian-flavored musings on oboe and bass clarinet, yet more of Montfort's sitar evocations and Rice variously suggesting flamenco and salsa with his percussive flourishes. Plus Parker playing the santur, a dulcimer of Persian origins. On paper, it looks like a recipe for disaster, but the musicians pull it off with aplomb.

So who cares if the zeitgeist is turning to xenophobia and isolationism—viva multiculturalism!

David spends his free time covering jazz in and around the Bay Area.