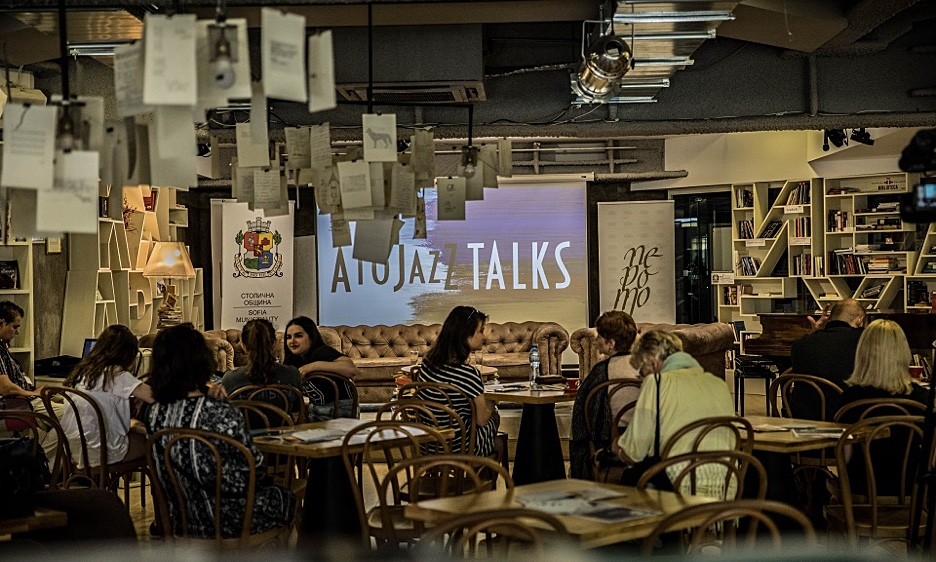 Figure out where you want to be a year, two years, three years from now. You need to figure out the steps needed to get you there. This is a critical thing to do —Katherine McVicker, professional music agent, Music Works International

For the majority of young musicians, the very notion of pursuing a career in music can be daunting, to say the least. Admittedly, it is perhaps easier than ever before to make and record music, but what then? How can a musician get reviews for their CD in the media? How can a band attract promoters and get gigs in clubs and on festival stages? How can a band build a fan base? What's the best way to approach a record company? Is a manager necessary in this DIY age? What funding opportunities exist? In short, what are the steps required to make it professionally?

The A to JazZ Talks, part of the A to JazZ Festival 2019 (see separate article) is the brainchild of Mila Georgieva, International Relations Manager, and is designed to answer just such questions.

The Literature Club Peroto, a cosy café/book-shop in Sofia's National Palace of Culture, was the venue for a series of panel discussions and Q&A sessions with industry professionals, whose aim was to encourage Bulgarian jazz musicians—and musicians in general—in their careers.

The talks were filmed and broadcast by Mezzo, an international TV company specializing in classical music, jazz and dance.

Moderator Dimitar Bodurov—one of Bulgaria's most celebrated contemporary jazz musicians—began by asking what the jazz markets are currently looking for. Are there, he asked, obvious trends or preferred formats?

Katherine McVicker, a professional agent since 1987, the last twenty of those in Europe, began by recognizing the diversity of markets. America may be one country, but smooth jazz may dominate in California while New York or Washington would be used to more sophisticated forms of jazz. Likewise, she said, every country in Europe represents a different challenge. "Every market has to be taken on its own terms."

The biggest change in the music industry has been the collapse of the record industry, which has meant that musicians have to tour extensively to make a living This means, it follows, researching and knowing the markets they are aiming for. The agent, therefore, has become a central figure in the music world. In short, McVicker emphasized that the markets are looking for artists "who have all their business stuff together."

Fielding the question on the openness of markets from a global perspective, the author noted that whilst American jazz artists have long made their living from touring Europe and Asia, the traffic is nearly all one-way. The web of red tape and visa costs generally prohibits the majority of European and Asian jazz artists from touring America.

More specifically, European jazz festivals in particular like marketable projects from an artist, as opposed to artists touring to simply plug their latest record. One only has to look at Herbie Hancock's records/tours over the past couple of decades—The New Standard, Gershwin's World, River: The Joni Letters The River, The Imagine Project, etc to see this in action. Jason Moran is another artist who has thrived with specific projects, such as his theatrical Fats Waller tribute.

Bodurov made the point that American jazz artists still exert a great pull, and that there is perhaps more pressure on European jazz musicians, competing for gigs, to find an original, marketable voice.

For piano trios and small ensembles, it is difficult to carve an original path within the jazz tradition. Consequently, following the lead of the now-defunct E.S.T., groups have tended to embrace a greater pop sensibility, adopt more urbane rhythms (hip-hop, break-beat etc) and channel the latest technology. Turntables, [think Pawel Kaczmarczyk or Aki Takase], loops, sampling and audio-visual effects are all commonplace.

As a former jazz musician, and now someone who helps musicians build their careers, Sillamaa sees the bigger picture. Whilst it is perhaps primarily the festival directors, club owners and agents—with their power to present acts—who effectively shape the markets, Sillamaa cautioned against underestimating the audiences. An audience survey at Jazkaar, Estonia's major international jazz festival, revealed that the audience had no fear of long solos, and furthermore, that they appreciated hearing the artists talk about their music onstage. They looked for an immersive experience, where the music is central, but is not the only thing to enjoy.

Whereas a fifteen-minute drum solo might work a treat in a club, it mightn't go down quite so well at a festival or in a concert hall, McVicker noted, urging musicians to be mindful of how best to engage audiences in different spaces.

Sponsors also play into the narrative of the marketing of jazz, McVicker added, with the worldwide trend for jazz to fuse with other musics often a response to commercial demands. Such fusions are nothing new, McVicker said, citing the examples of John McLaughlin's Mahavishnu Orchestra, and Joe Zawinul in the 1970s.

Sillamaa observed that we are living in a post-genre age where young audiences do not perceive genre differentiation in the same way as people in the past. New musical platforms, the changing nature of music distribution and how music is consumed, have all altered perceptions of genre. In fact, musical tastes for the Spotify generation are not defined or restricted by genre.

The notion of genre and identity in music tied in with Dimitar's question, directed first to the author, on whether or not it is possible to talk about a Bulgarian jazz identity. It is of course possible to recognize Bulgarian rhythms-some of the fastest in this part of Europe—and Bulgarian folkloric melodies in certain jazz musicians, just as it is possible to hear certain rhythmic and melodic traits in much Cuban jazz, for example. But it would be odd, not to say rather contrived, if all the jazz musicians of a given country felt the necessity to adopt their national rhythms and melodies.

A number of individuals have done so brilliantly, however, and one thinks of Lars Gullin and Jan Johansson in Sweden, Isfar Sarabski in Azerbaijan, South African Abdullah Ibrahim, Indonesian group simakDialog, Serbian pianist Bojan Z, and Spanish saxophonist Pedro Iturralde, to give just a few examples.

In Bulgaria, perhaps Milcho Leviev is the preeminent jazz musician to have adapted Bulgarian folk music. The point is, however, that these are all individuals and don't necessarily represent a national jazz identity or broader movement. Most musicians aspire to be recognizable for their individuality, and it is precisely because of this that the jazz of almost any country you care to think of is usually extremely diverse in nature.

Kenny G raised the flag of smooth jazz—by far the most popular form of jazz on the planet—while Oscar Peterson mined the romance of the Great American songbook. There was Afro-Cuban bop from Dizzy Gillespie and driving hard bop from Art Blakey. Vocal jazz of contrasting hues came from Manhattan Transfer and the North California Jazz Choir. Ray Barretto plied pachanga, boogaloo and salsa-tinged Latin-jazz.

The long list of American jazz artists performing in the Hague that year also included Henry Threadgill, Bill Frisell, The Yellowjackets and Etta James—all distinctive artists coming from quite different traditions. Where, the author asked, is the common musical thread between all these artists? Each was quite unique, which begs the question, what do we mean when we talk about American jazz? Or any country's jazz, for that matter. For all the talk of a Nordic sound—a theme addressed in Luca Vitali's book The Sound of the North: Norway and the European Jazz Scene (2014), it's fair to say that the Norwegian jazz panorama is arguably the most eclectic on the planet.

Moderator Bodurov made the point that Italian jazz and German jazz do not sound at all the same. That may be true, but it would be stranger still if they did. Not all Italian jazz, for example, sounds the same, just as the food, language, sports, customs and topography also vary from region to region.

It's credible that countries that have been isolated politically, such as Cuba, say, might have a stronger indigenous jazz identity than more internationally integrated nations. And it's maybe no coincidence, given its far-flung position on the planet, that Australia has preserved traditional , New Orelans-style jazz better than most, with the annual trad-jazz festival that is the Australian Jazz Convention fast approaching its eightieth year. That, of course, is only one face of Australian jazz.

In Europe, where many countries share multiple borders and where historically, the movements of people have been fairly constant—and often dramatic in scale due to wars—it follows that cultures overlap. In an area like the Balkans, the provenance of instruments is often hard to establish exactly, given their place in the culture of multiple countries. Who can say for certain that the bagpipe or the kaval originated in one particular country? It is certainly easier to talk about a Balkan folkloric sound than it is to talk about a Bulgarian jazz sound, but it's also a little too easy to generalize about either.

National identity, Sillamaa observed, is often a loaded term, and when people talk about a Norwegian jazz sound, for example, they are perhaps referring to a micro jazz scene that has developed at a given place at a given time. There is nearly always a bigger, more complex picture. In conclusion to the first part of the panel discussion, Bodurov encouraged the musicians present in the audience and those watching on Mezzo TV to find their own voice and to find or create their own market.

The second half of the conference panel saw broad-ranging discussion on how jazz musicians can best represent themselves to promoters and media. Moderator Bodurov began by asking what agents look for in musicians as potential clients. Katherine McVicker said that if a musician cannot explain their music to her, then how can she explain it to a festival director or a club owner. "You have to be able to communicate what it is that makes you special." Musicians must pay attention to the business side of music, McVicker underlined, "because this is a business." In her experience, many musicians don't want to acknowledge the business side of music or else they don't want to deal with it, usually because they find it so overwhelming.