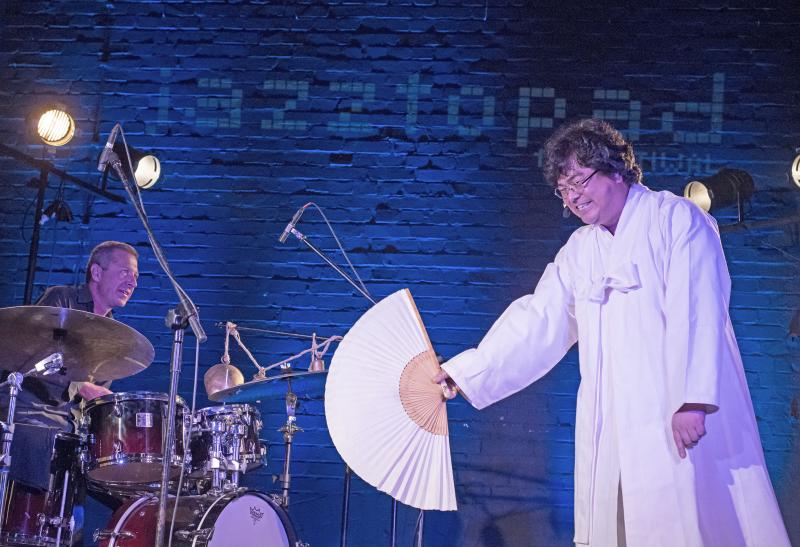 It's always a treat to be invited somewhere new, especially somewhere with a strong jazz scene that remains, for the most part, hidden from the rest of the world. But when the country is Poland and the city Wrocĺaw, there are even greater treats awaiting, as a young festival that has, in just 10 short years, not only established itself as a premiere jazz destination within its own country, but garnered an international reputation that has slowly but surely focused the eyes of the jazz world on the country and its not insignificant collection of stellar musicians.

Ask most people to name some Polish musicians and the same small group is usually the answer, with Tomasz Stanko, Krzysztof Komeda, Michal Urbaniak, Marcin Wasilewski and Zbigniew Seifert amongst them. With its difficult history, Poland has been a strategic location that has seen numerous invasions, the most recent being the Soviet invasion of 1944, resulting in the country being renamed the People's Republic of Poland, in 1952, which it remained until 1989, when Soviet rule was overthrown in and the country became a democracy. The result is that, for much of the period that jazz was both emerging and becoming a very personal means of expression in other countries around the world, the same thing was happening in Poland, with jazz in many ways representing a very different kind of revolution...but only a few musicians garnering attention outside the country.

Despite dozens of jazz festivals scattered around the country, the most surprising thing is that it took a young lapsed cellist and journalist, Piotr Turkiewicz, to take Jazztopad (from the Polish: November Jazz), after its two relatively forgettable first years, to turn it into not just a world-class festival that has, over the ensuing eight years, become better known than many of its sister festivals; he also managed to place it on the international map and, through a series of cultural exchanges, begun providing international attention to a significant number of hitherto unheard Polish jazz artists.

Turkiewicz discusses the genesis of his involvement in Jazztopad:

As Jazztopad celebrated its tenth anniversary in 2013, it was the perfect time for a first encounter, and an opportunity to see what all the growing international buzz was about. Most festivals have one or two characteristics that define them and make them worth attending, but as Jazztopad has evolved over Turkiewicz's seven years at the helm, it has emerged as a festival with so many distinguishing qualities that it's easy to lose count. Among them:

1. While other festivals commission the occasional new work, Jazztopad is predicated on newly commissioned work—usually more than one. 2010 saw no fewer than three new works, premiered by everyone from Tony Malaby and William Parker, during its first weekend, to a stellar closing concert from Charles Lloyd that featured, in addition to nearly 80 minutes of new music, a completely new lineup of musicians, some fellow Americans, others from Greece;
2. A two-day, daytime jazz showcase, Don't Panic! We're From Poland, that was open to the public but geared specifically at a contingent of guests (approximately 25 invitees ranging from festival presenters and club owners to journalists), presenting nine impressive young up-and-coming artists;
3. During the week, a series of jazz films at a local cinema were shown, but to make them more than just straight screenings, each film was introduced by a 20-minute free improvisation by two musicians behind a screen with the cinema's lights completely down, the series called Concerts in the Dark;
4. While most festivals recruit artists from around the world, Jazztopad actually works on exchanges with other festivals, with Jazztopad Presents: Poland taking place at the 2013 Tokyo Jazz Festival and, in return, Tokyo Jazz Festival Presents: Japan programmed in Wrocĺaw;
5. Two afternoons of living room concerts in local homes ranging from student apartments to an actual houseboat, creating six one-hour events over two days, each one consisting of two 20-minute all-improvised sets by two different duos, consisting of musicians who had performed elsewhere at the festival, but who were often brought together in this context for the first time;
6. Opening talks by the artists, prior to their performances, to help educate the audience about everything from the music they make to the instruments they use;
7. Matinees for children that combined workshops with cult Polish cartoons, with Wrocĺaw jazz musicians providing live scores.

Of course, all these various events didn't happen the first year. Jazztopad's early years were, in fact, truly a grassroots affair, as Turkiewicz recalls:

When Turkiewicz took over Jazztopad in 2006, he had little experience with musicians, booking or festival organizing. But he was clearly bright and learned quickly, coming to the conclusion that he may not have had the kind of budget that many other festivals do; so, instead, he created other incenti0ves that, for musicians, have turned out to be just as attractive:

Turkiewicz has also striven to break down the wall between musicians and fans. While obvious approaches like post-show signings are not uncommon at other festivals, the idea of living room concerts, where fans were often sitting a meter or less from the artists, made that part of Jazztopad all the more intimate and integrated. Before, in between and after the sets the musicians mingled with the audience, creating something that recognized performance as something more collaborative:

2013 also represented the first time for both the Concerts in the Dark series and the Don't Panic! We're From Poland showcase:

There were other differences. One of the sad realities of most festivals is that the people who spend months organizing them rarely get the opportunity to actually experience them. Through some out-of-the-box thinking and a simple desire to experience the fruits of his labors, Turkiewicz could be seen at just about every event—in the case of the main shows at the city's Philharmonic Hall, usually front row and center:

Encouraging Charles Lloyd to put together a group to perform a new commissioned work—as is the case with many commissions— took years to go from inception to execution:

Monday-Wednesday, November 18-20: Concerts in the Dark and Movies on Jazz

Having missed the first weekend, it was a pleasure to spend the first three evenings getting acclimatized to the festival in a more relaxed fashion. The first stop? Coffee, with Turkiewicz and pianist Joachim Kuhn, who had apparently delivered a terrific show the evening before with his trio (drummer/tablaists Ramon Lopez and vocalist/guimbri, kalimba and molo player Majid Bekkas). it was an enlightenment, in itself, to meet the pianist who had played on so many important sessions, including one particularly important recording by Zbigniew Seifert (Man of the Light, MPS, 1977), just a few short years before the Polish violinist passed at the too-young age of 32, on the cusp of greater international fame. But it was the film presented at the local cinema,