Christopher Komeda's big time began back at the time of the I Sopot Jazz Festival in August 1956, but his ties with music were much older. Born in Poznan in 1931 he took piano lessons since his childhood and his first dreams were to be a famous virtuoso. They were no daydreams for at the age of eight he started at the Poznan conservatory. But the war upset his plans. During the war and later, until 1950 he continued to study the piano and theory but he was aware the six years were actually lost. Having graduated from secondary school he had to make up his mind as to his further studies. He wanted to have an exciting job and so he became an M. D. He got interested in entertainment and dance music before starting his studies. He went to secondary school at Ostrow Wielkopolski and there he met Witold Kujawski, a graduate of the same school who was already a well known swinging bass-player. It was Kujawski who initiated Komeda-Trzcinski into jazz. He took him to Cracow. It was the romantic period of Polish jazz, called the catacomb period. There were no concert jazz audiences then. In Witold's legendary little room in Cracow, jam-sessions were held with the participation of such renowned musicians as Matuszkiewicz, Borowiec, Walasek and the host himself.

A couple of years later it became clear why Komeda was the most impressed by the be-bop performance of a very young musician Andrzej Trzaskowski. His fascination with jazz and the friendship with leading musicians strengthened Christopher Komeda's connections with music in spite of his medical job. For some time he co-operated with the Polish post-war jazz pioneer combo, the Cracow-Lodz Melomani where Matuszkiewicz, Trzaskowski and Kujawski were the pillars. Later he played with various Poznan entertainment bands. One of them was Jerzy Grzewinski's group which soon changed into a dixieland band. Komeda appeared together with Grzewinski at the I Sopot Festival. But he was a great success at the festival not with him but with Ptaszyn Wroblewski and Milian. The reason was a simple one - dixieland wasn't enough for him any more. Modern music fascinated him above all. And from this passion the Komeda Sextet came into being. He first used his pseudonym "Komeda" when he was working at an Ear, Nose and Throat clinic, to hide his music passion from his colleagues. Jazz only just started fighting for its rights in Poland. It was still regarded as a cheap, suspect, night-club music. Komeda Sextet became the first Polish jazz group playing exclusively modern music and its spectacular performance on the festival stage cleared the triumphant way for jazz in Poland. Together with baritone saxophonist Jan 'Ptaszyn' Wroblewski and Jerzy Milian on vibes the sextet played cool jazz which referred to European jazz traditions and was a synthesis of the two most popular combos of that time: The Modern Jazz Quartet and the Gerry Mulligan Quartet.

During the thirteen years that passed since the I Festival, forms dominating Komeda's means of expression changed, but the main feature of his personality remained unchanged in its substance. It only matured, grew and crystallised. It turned into poetry. Because in whatever he did, Christopher Komeda was above all a restless, ever searching poet. He found the individual expression of jazz in himself, in Slavic lyricism and in the traditions of Polish music. He was a master of a poetic atmosphere and knew how to conquer audiences better than most jazzmen did. It is impossible not to recognise his music: it has a unique sound. He created a new climate. The process of crystallising, enriching and refining them did not take a year or two, it took years. From 1956 to 1962 Komeda improved his piano and appeared at consecutive domestic festivals with his own band, always with an ambitious programme. Those were also the years of his Moscow, Grenoble and Paris successes - his first abroad. He was also the author of the interesting 'Jazz and Poetry' show presented at Jazz Jamboree'60 and later at the Warsaw Philharmonic Hall, and started writing movie scores: Polanski's "Knife in the Water", Wajda's "Innocent Sorcerers", Nasfeter's "My Dad" and Morgenstern's "See You Tomorrow".

The period that in Komeda's artistic biography could be called his period of maturing and building a musical language of his own was crowned by 'Ballet Etudes' performed at Jazz Jamboree'62. The domestic response to Etudes was less than enthusiastic but it opened the gates of Europe to Christopher Komeda. In spring 1960 he arrived in Scandinavia and then came back every year.

Scandinavian successes were followed by other ones: at jazz festivals in Prague, Bled and Koenigsberg, during a tour of Bulgaria and both German republics. In May 1967 Komeda Quartet (Tomasz Stanko - trumpet, Roman Dylag - bass, Rune Carlsson - drums, plus Zbigniew Namyslowski - sax) recorded Lirik und Jazz for the West German Electrola record company.

In January 1968 he went to the USA, where he worked on movie score to Polanski's "Rosemary's Baby" and Kulik's "The Riot." In December, in Los Angeles he had a tragic accident. Brought to Poland by his wife he died on April 23rd, 1969 and was buried in Powazki Cemetery in Warsaw. Show less

"Crazy Girl" by Komeda Project - A Fresh New Look at the Wondrous Music...

Knife In The Water... 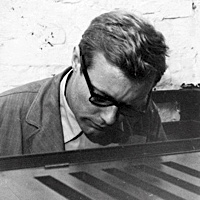 All About Jazz musician pages are maintained by musicians, publicists and trusted members like you. Interested? Tell us why you would like to improve the Krzysztof Komeda musician page.