By Mark Corroto
October 5, 2019
Sign in to view read count 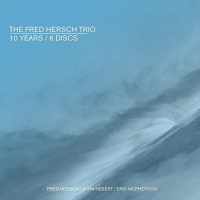 You might be surprised by pianist Fred Hersch's response to a near-death coma in 2008. Quoting from his memoir Good Things Happen Slowly: A Life In And Out Of Jazz (Crown Archetype Press, 2017), "a confrontation with death brings home the preciousness of life... It was the newest, brightest, shining, most surprising, most uplifting feeling I had ever had." Listeners need not endure a two-month persistent vegetative state to induce a similar response. They need only listen to Hersch's output post-coma to get that brightest, shining, most surprising, and most uplifting feeling.

Post-2009 you could hear him in a solo setting on the Palmetto Records releases, Alone At The Vanguard (2011), Solo (2015) and Open Book (2017) or in duo with Ralph Alessi, Julian Lage, or Anat Cohen. But to get the most uplifting bang for your buck, his trio recordings have always held the most value. Pre-2009, Hersch's trios included the stellar bassists, Marc Johnson or Drew Gress, also some of today's finest drummers, including Joey Baron, Nasheet Waits, and Tom Rainey. Post-2009, the pianist assembled a new trio, and it contains his best work. But it also may contain bassist John Hébert's and drummer Eric McPherson's best work.

A great jazz trio is not just a vehicle for one musician. It can be, and there are jazz trios that, to tell the truth, are simply a soloist with a side salad. The finest jazz trios create something greater than just their parts. Think about the trios, Hank Jones, Ron Carter and Tony Williams, or Bill Evans, Scott LaFaro and Paul Motian or Oscar Peterson, Ray Brown and Ed Thigpen. Insert your favorite trios here. While there might have been a headliner on the marquee, the excitement happened because of the chemistry between the players. This is definitely true for the latest version of The Fred Hersch Trio. Throughout these five (two studio and three live) recording dates documenting the trio's progression from formation in 2009, we experience a unified sound coming together. Not that their inaugural release Whirl (2010) isn't a 4½ star album. It's that through a rigorous touring and performance schedule, the trio has developed a keen ESP. If you skip to the final recording, Live In Europe (2018), you'll notice that rapport. The trio opens with a sideways approach to Thelonious Monk's "We See," played as if each musician is daring the others to make the next move. Monk, who might be Hersch's spirit animal, is the perfect matter for this kind of musical mischief and Hersch ends all his concerts and five out of six of these dates with his (now) trademark random-Monk generator. Elsewhere he harkens back to the vibrancy of the NY club scene of the 1970s and 80s when he was a sideman for Joe Henderson, Art Farmer and Billy Harper; jazz was at the fork in the road where old masters were abandoned for young lions. The trio plays music dedicated to Hersch's heroes, Sonny Rollins "Softly As A Morning Sunrise," "Doxy," and the Hersch original "Newkcalypso," Ornette Coleman "Lonely Woman," Charlie Parker "Segment" and Jaki Byard's "Mrs. Parker Of K.C.," Wayne Shorter "Mikayo" and "Black Nile," and a devastatingly beautiful rendition of Jimmy Rowles "The Peacocks." There are also three dozen originals; they are new standards to pass to the next generation. This edition allows for a deep dive into the development of a first class working group, a rare commodity these days.

Whirl You're My Everything; Snow Is Falling...;Blue Midnight; Skipping; Mandevilla; When Your Lover Has Gone; Whirl; Sad Poet; Mrs. Parker Of K.C.; Still Here. Alive At The Vanguard CD1: Havana; Tristesse; Segment; Lonely Woman/Nardis; Dream of Monk; Rising, Falling; Softly As In a Morning Sunrise; Doxy. CD2: Opener; I Fall in Love Too Easily; Jackalope; The Wind/Moon and Sand; Sartorial; From This Moment On; The Song is You/Played Twice. Floating You & The Night & The Music; Floating; West Virginia Rose (For Florette & Roslyn; Home Fries (For John Hebert); Far Away (For Shimrit); Arcata (For Esperanza); A Speech to the Sea (For Maaria); Autumn Haze (For Kevin Hays); If Ever I Would Leave You; Let's Cool One. Sunday Night At The Vanguard A Cockeyed Optimist; Serpentine; The Optimum Thing; Calligram; Blackwing Palomino; For No One; Everybody’s Song But My Own; The Peacocks; We See; Solo Encore: Valentine. Live In Europe We See; Snape Maltings; Scuttlers; Skipping; Bristol Fog; Newklypso; The Big Easy; Miyako; Black Nile; Blue Monk.