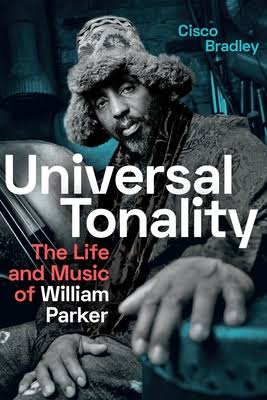 Who is William Parker? He is a jazz bassist, yes. But he is also a band leader, composer, writer & poet, community organizer, peace activist, and cultural anthropologist. Cisco Bradley endeavors to pull the diverse parts of the artist's life together in this first ever biography of Parker. It is a monumental task, and like the dozens of biographies of Louis Armstrong that have been published, it is a good start.

Born on January 10, 1952 at the Bronx—Lebanon Hospital into a family of four, which included his older brother Thomas Jr., there were no outward signs of what would become of this child. Unlike Miles Davis, who grew up in an affluent family (his father was a dentist) Parker came from blue collar working class stock. The book details Parker's interests from sports to nature and poetry. It appears he was a shy child, and he had a very active inner life. All of which is evidenced by his journaling and poetry. The question remains, how did his experience transform into the jazz icon he has become today?

Bradley finds clues in Parker's DNA, tracing his roots back to his family's life in North and South Carolina and before that their ancestor's experience in West Africa. Whether or not you believe that the tragedies and triumphs of a people can be encoded into the DNA of future generations, you cannot disregard the connections Parker's music has with the African diaspora and his ancestors intermingling with the Native American. His love of the natural world seems to have been inherited, because his experience in the inner—city was bereft of mountains and wild rivers. Parker summoned these, along with his observations of clouds and sky to free himself of a predestined life of manual labor. Against the admonitions of his teachers and wishes of his mother, he maintained a mind open to exploration and free thinking. His maturity came in the 1960s concurrent with the Black Power and Black Arts movements. By 1970 his musical heroes John Coltrane and Albert Ayler were dead, but their spark lit a flame in Parker that burns bright today.

The book details the mostly self-taught bassist's indefatigable work ethic and unceasing pursuit of experience and learning. What boggles the mind is just how he survived the near—death of jazz in the 1970s when the record industry was fixated on rock music and even more astonishing was his ability to endure the wave of neoconservative jazz of the 1980s and '90s. During those nearly three decades record companies, critics, and venues eschewed anything that wasn't retrogressive or conservatively polished. Parker though was a true believer, along with Frank Lowe, Jemeel Moondoc, Noah Howard, Rashied Ali, Billy Bang, Daniel Carter, Milford Graves, to name but a few, kept the fires burning.

His big break came with an invitation to join Cecil Taylor's band. Taylor was the biggest name in free jazz in the United States, and Parker's exposure to the pianist's creative process would leave an everlasting imprint. Additionally, their tours of Europe opened the door to collaborations with the likes of Peter Brötzmann, Evan Parker, Joëlle Léandre, Derek Bailey, and Peter Kowald.

The bulk of this biography focuses on Parker's ensembles, In Order To Survive, Little Huey Creative Music Orchestra, William Parker Quartet, and Raining On The Moon. Bradley does an excellent job at detailing concerts and recordings by these ensembles. He also touches on Parker's tributes to Duke Ellington (his father's favorite) and Curtis Mayfield. What is noticeably absent here are the details, and maybe more important, the tales of the bassist's work with Charles Gayle and William Parker, two giants of free jazz. A more robust portrait might have been given with more details from AUM Fidelity records chief Steven Joerg, who has single-handedly kept Parker's music in print, as would more content from musicians Parker has mentored, like pianist Matthew Shipp whose music owes much to the bassist.