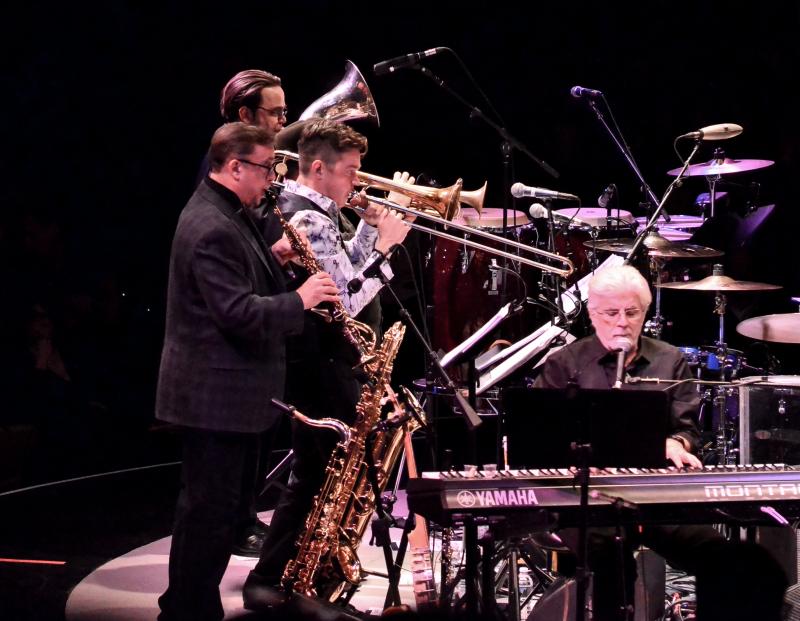 The original group started out together as Ronnie Hawkins's backing group, the Hawks, and was comprised of four Canadians and one American. The Band, in its original, most famous and most successful configuration featured the late Rick Danko on bass and vocals, Garth Hudson on keyboards, the late Richard Manuel on piano and vocals, Robbie Robertson on guitar and the late Levon Helm on drums and vocals. This was the group that backed Bob Dylan on the 1967 jams that became the Basement Tapes (Columbia Records, 1975) recordings and on his original electric tour.

On a cool winter evening in early February, the fourteen member tribute group for the Band delivered a tour de force concert that came as close to the original as possible in 2017. The performance was steeped in blues, rockabilly, rock, pop, R&B, New Orleans funk and jazz, country, honky-tonk and good old-fashioned Americana. A select touring band of top-notch musical stars delivered a joyous celebratory show performing much of the Band's historic final concert as it was originally performed 40 years ago. The NYCB Theatre at Westbury was the penultimate stop on the 11-city tour.

The group was comprised of Tour Director/guitarist/vocalist Warren Haynes (a former member of the Allman Brothers Band, who is currently a solo artist and the lead guitarist for Gov't Mule); singer/keyboardist Michael McDonald (who came to prominence as a member of both Steely Dan and The Doobie Brothers, and is also solo artist); Musical Director/bassist Don Was (who has produced the Bonnie Raitt, The Rolling Stones, and others including his own group Was Not Was); singer/guitarist Jamey Johnson (who has worked with Willie Nelson, Merle Haggard and many more); John Medeski, the rock/jazz/funk keyboard wizard; New Orleans drummer Terence Higgins (who is a member of both the Warren Haynes Band and the Dirty Dozen Brass Band). The brass section was overseen by trombonist Mark Mullins (of Bonerama, who used Toussaint's the original horn arrangements); Bobby Campo on trumpet; Ward Smith on saxophone and Matt Perrine (also of Bonerama) on sousaphone. Though they didn't perform on every song played during the evening, "Steady Rollin'" Bob Margolin (guitarist for the late Muddy Waters), keyboardist Ivan Neville (from Dumpstafunk) and his uncle Cyril Neville on vocals and congas, rounded out the band. The evening's concert at the cozy Long Island venue was a sold-out affair...and it was to be performed in-the-round. This configuration allowed the circular stage to rotate providing each section of the spherical concert hall with direct head-on views of the slowly spinning stage.

The performance did not replicate the complete Last Waltz concert film and album. Instead, it covered twenty-five songs spread out over two sets and encores, kicking off the festivities with a pre-recorded version of "Theme From The Last Waltz." Following the taped introduction, the band dove-in with a stellar version of "Up On Cripple Creek." The group's version, sung by Johnson, included all the nuances that made the original version iconic—twangy guitar, wah-wah pedal, yodeling and sing-a-long lyrics.

During the remainder of the first set the band treated the mostly middle-aged crowd in the packed-to-the-gills concert hall to exactly what they came and hoped for—an evening of fun late '60s and '70s drenched music made famous by the Band and the special guests who were present 40 years ago at the Winterland Ballroom. The first set consisted of eleven songs. In addition to the opening number, the set included "The Shape I'm In," "Life Is a Carnival" (both featuring lead vocals by McDonald) and "It Makes No Difference" (during which the contrast between McDonald's and Haynes vocals and the interplay between the musicians had the crowd leaning forward to scrutinize and get a better look at the history that was being made). Set one was also highlighted by the Haynes-led versions of "Stage Fright" and "This Wheels' On Fire," "Who Do You Love?" and "Down South in New Orleans" (featuring Cyril Neville and Ivan Neville) and the rousing set-closing "The Night They Drove Old Dixie Down" with vocals by Johnson.

After taking a short intermission, the performers returned to the stage and rocked it with a vengeance. "The Genetic Method" segued into "Chest Fever" and "Ophelia." Haynes and Johnson handled the vocals with aplomb. Van Morrison's "Caravan" and Crosby, Stills, Nash & Young's "Helpless" kept the crowd members who weren't dancing and singing in the aisles on the edge of their seats. Cyril and Ivan Neville returned to deliver a spot-on version of "Mystery Train." Johnson followed with a countrified but funky version of "Rag Mama Rag."

The electric blues tunes "Mannish Boy" and "Caldonia" featuring Margolin on slide guitar and vocals were both rockin' and poignant. McDonald, then steered the concert into the homestretch with Bob Dylan's "Forever Young" followed by spine-tingling full band performances of "The Weight" and "I Shall Be Released." The show fittingly ended with a superb version of Dr. John's "Such A Night" which was followed by "Don't Do It."

It was obvious to everyone in attendance that the band members were having a blast. Each member was smiling. Each musician, when not taking centerstage, could be seen groovin' to the beat. Was' bass playing and Higgins' backbeat gave each song a rock-solid foundation. McDonald performed like a man possessed. Haynes' and Johnson's vocals and guitar were note-perfect. The Mullins, Campo, Smith and Perrine horn section gave each song its signature swing. Cyril Neville with his congas and vocals gave his songs a special and funky New Orleans vibe. Medeski's and Ivan Neville's work on the keys gave each tune a fuller sound and, finally, Margolin's tasty and robust blues guitar leads were so powerful that they would have made Waters proud.

The original Last Waltz was just over 40 years ago. Surprisingly, the crowd wasn't completely filled with older Baby Boomers. Though that generation occupied most of the seats, the other seats in the mid-sized venue were filled by Generation X-ers and the occasional Millennial who not only were there for the spectacle, but also knew the words to all of the songs.