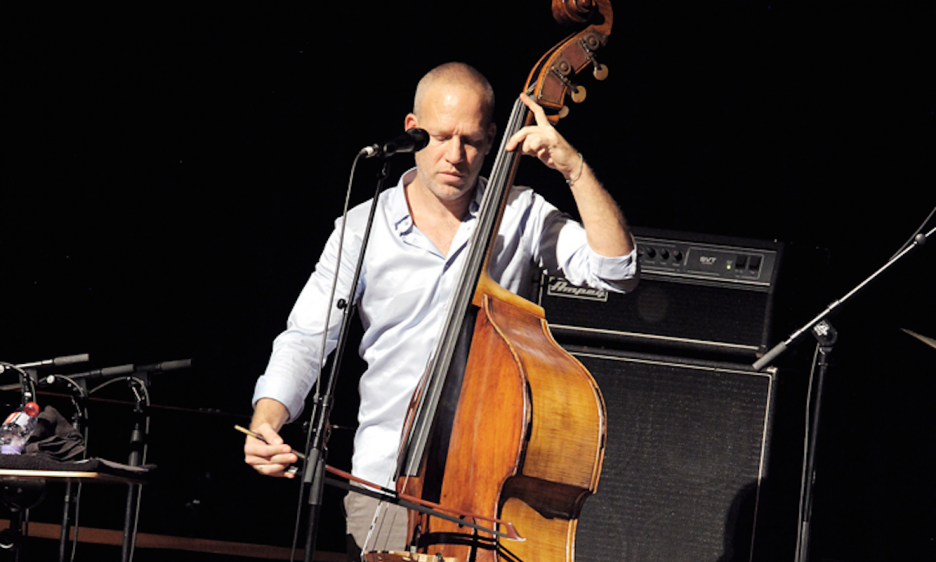 Avishai Cohen is embarking on a global birthday tour next year, including many dates with this current trio formation of long time drummer and fellow Israeli Noam David and pianist Elchin Shirinov from Azerbaijan.

Considering that the group started presenting most of the album Arvoles (Razdaz Recordz 2019) recently, this was probably a prime time to catch them in terms of both well-honed repertoire and freshness of focus. Production notes indicate that each musician made compositional contributions to the record, and there was a consistent triple threat dynamic as each player took rotating leads.

Heinersdorff promotions have a strong local reputation for delivering upscale concerts to the area, and tonight certainly kept that streak intact. An early evening downpour of near freezing rain didn't deter a near sellout crowd from filling Dusseldorf's beautiful Tonhalle building with appreciative fans. The structure originated in 1926 as the world's largest planetarium and even long after remodeling, Cohen's crew gave patrons a clear glimpse of the heavens.

The audience seemed spellbound from Cohen's opening solo, which also highlighted the precisely balanced supporting percussion on either side of him as he embraced his instrument with typical dramatic flair. After grabbing a bow, which would be used frequently; he segued into rhumba mode and by their third song, the band had reached a rare point of excellence they maintained for the rest of the night with slightly improvised and extended takes on songs like "Face Me" and "New York 90s."

Shirinov seemed to spark stardust on the keys during "Gesture #1." David stirred his brushes over the snare on "Wings" to create remarkable backing sound waves that stood out even more clearly when he interspersed the sticks for more standardized snaps. With a five skin Yahama drum kit accented by an extra snare and elevated bongo set on the side, he nearly stole the show after a pair of solos that earned a far bigger response than any drumming seen around here lately. The first solo drew many rare whistles of approval and the second, during "Simonero" near the show's climax; made it seem like the cheering crowd might rush the stage.

"We were in high school finding out about Monk, Coltrane and Miles Davis and we wanted to be like them," smiled Cohen while describing his long time association with David. "He was just as good back then already, I had to practice for years."

Transitional bass tones in almost every song kept the nearly two-hour set freshly vibrant. It was impressive how just a few slaps to the bongos or knocks atop the bass frame made resounding effects that proved how little touches can make a noticeable difference. The 80 minutes before the band first exited the stage seemed to fly by in a whirlwind of creativity, and from the vocal bursts of audience approval it sounded like everyone was more than satisfied well before the curtain call.

Cohen emerged from the wings to play a solo encore and sing in Spanish on "Alfonsia y El Mar," then delivered an inspired take of "Sometimes I Feel Like a Motherless Child" that included some wild bow work abstractions. The rest of the trio rejoined him and closed the show with an extended version of "Remembering," to a rapturous reaction. It was indeed the kind of evening few jazz aficionados would ever forget.