Warren Haynes’ long-anticipated solo album, Man In Motion (Concord Records), is a timeless collection of songs that crackle with modern vitality yet draw on his deepest roots as an artist.

The disc pumps fresh blood into the heart of soul and blues, stoked by Haynes’s Herculean prowess as both a powerhouse singer and guitarist — a reputation he’s earned as a member of three of the greatest live groups in rock history: The Allman Brothers Band, The Dead and his own Gov’t Mule.

In a sense, the vocal-driven Man In Motion is an album he’s been aching to make since he first dreamed of becoming a musician.

“Before I started playing guitar, I wanted to be a singer, right from the age of five or six,” the rock ‘n’ roll legend regales. “And what I wanted to sing was soul music. My brothers and I had just a handful of albums. First they were the ‘Best of’ collections by Sam & Dave, Wilson Pickett, James Brown, the Temptations, Aretha Franklin…and eventually albums by the three Kings of the blues, Freddie King, B.B. King and Albert King. In fact, it was hearing B.B. and Freddie that made me realize you could be a great singer and a great guitar player. So I decided to model myself after them.”

For Man In Motion, Haynes draws on his dynamic gravel-and-honey voice and stunning six-string syntax to create melodies that frame the past with the present, fusing enduring themes of love, desire and loss with bristling undeniably contemporary energy.

Tunes like Haynes’ uplifting Albert King influenced string-bender “The River’s Gonna Rise” — an anthem of hope for these tumultuous times — and the poignant narrative “A Friend To You” ring with the same straight-talking authenticity as William Bell’s Stax-label jewel “Every Day is a Holiday,” the disc’s sole cover.

“In soul and blues, the vocal is really the centerpiece,” Haynes explains. “And it’s not about irony or smoke-and-mirrors. It’s about telling real stories about everyday people in an honest way. Honesty in music trumps everything else.”

Despite Man In Motion’s sharp focus on his singing, there’s no shortage of numbers like “Sick of My Shadow,” which straddles the terrain of Haynes’ guitar universe, blending rock, soul, R&B and jazz in its introspective mix.

Fans of Haynes’ growling, distinctive signature six-string approach in Gov’t Mule and the Allman Brothers will notice a subtler — if no less adventurous — palette of guitar tones on Man in Motion.

“I was going for a kind of pre-rock sound,” Haynes explains. “These songs based in soul and blues really require cleaner tones to pay respect to the era that inspired them and to really get to the emotional heart of the matter. I used the wah-wah and a few other effects, but there’s a lot of B.B. King, Albert King and Freddie King influence on this album from a guitar standpoint.”

Although Haynes employed his Gibson signature model Les Paul Standard guitar for some numbers, a clutch of vintage Gibson semi-hollowbody instruments — ES-335 and ES-345 models from his extensive collection — account for most of the tracks, plus an archtop hollowbody D’Angelico that inspired his jazz break on “Sick of My Shadow.”

As usual, Haynes improvised his solos, playing live to two-inch tape along with the core band of fellow virtuosos that he assembled at Willie Nelson’s Pedemales Studio near Austin, where the past few Gov’t Mule CDs were also recorded.

“I wanted to record this album just like the classic records that influenced me,” he notes. “The band played together on all the songs and we avoided overdubs. It was important to catch the energy and emotion of music being made live by a group of great musicians.”

“For this kind of music,” Haynes adds, “that chemistry is essential. I was really fortunate. I put my wish list of musicians together and they were all available and excited about the project.” But it’s really Haynes’ hard work — his constant motion — rather than good fortune that has taken this creative dynamo to the zenith of his career.

After all, it’s been 18 years since he last entered the studio to record a solo album, but Haynes is no slacker. He has been busy. Very busy. As rock’s foremost MVP singer-guitarist, the burly native of Asheville, North Carolina has been constantly on the move and in the spotlight for the past two decades.

During that time Haynes has maintained his tenure in Gov’t Mule, the Allman Brothers Band and the Dead, and while barely catching his breath between their tours and studio sessions, he’s also performed or cut tunes with a diverse array of musicians including Phil Lesh & Friends, Bob Dylan, John Lee Hooker, Eric Clapton, Bonnie Raitt, Dave Matthews, and most recently with his longtime hero BB King.

No wonder it’s taken Haynes so long to get back into the studio to make the follow-up to his first solo disc, 1993’s Tales of Ordinary Madness. And no wonder his new album is called Man in Motion.

Haynes describes the title track as “a snapshot of someone who is evolving and in constant change, and I can certainly relate to that. I feel that musicians are students for life, so it’s important for me to always seek new experiences and throw myself curve balls, to remain inspired and challenged, and to grow. And while I’ve been thinking about getting back to another solo studio album for a long time now, I’ve had other things demanding my attention.”

In addition to his three solo discs (including 2004’s acoustic Live At Bonnaroo), seven albums with the Allman Brothers and Gov’t Mule’s 16 studio and live releases, Haynes has accumulated stacks of accolades for his efforts.

They range from Grammy wins and nominations to his ranking at number 23 on Rolling Stone’s list of “The 100 Greatest Guitarists of All Time.” Haynes has played New York City’s historic Beacon Theater nearly 300 times, more than any other artist. Gov’t Mule has sold over two million song downloads from their own MuleTracks web site. And a wide range of stars including Garth Brooks, Gregg Allman, Phil Lesh, Little Milton, John Mayall, George Jones, Derek Trucks, Susan Tedeschi and Buckwheat Zydeco have recorded his songs in addition to the 25 songs he’s written for the Allman Brothers Band.

If there’s such a thing as karma, perhaps that’s a factor in Haynes’ success, since he’s also a major supporter of Habitat for Humanity, a charity that builds housing for the disadvantaged. Each year he organizes his annual “Christmas Jam” benefit for Habitat now in its 23rd year, in his hometown of Asheville, NC. Of course, Haynes is not resting on his laurels for a moment. He’ll be touring behind Man In Motion this spring and summer while Gov’t Mule is on hiatus, and then regrouping with his Mule-mates to write and rehearse songs for their ninth studio album.

“There are other projects I want to do, too,” he relates. “I’m interested in recording a singer-songwriter oriented album with more acoustic instruments, a jazzy instrumental CD and a straight-up blues record. But like Man in Motion, those albums will have to wait until the time is right.” Show less 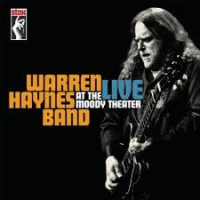 Live at the Moody...

All About Jazz musician pages are maintained by musicians, publicists and trusted members like you. Interested? Tell us why you would like to improve the Warren Haynes musician page.