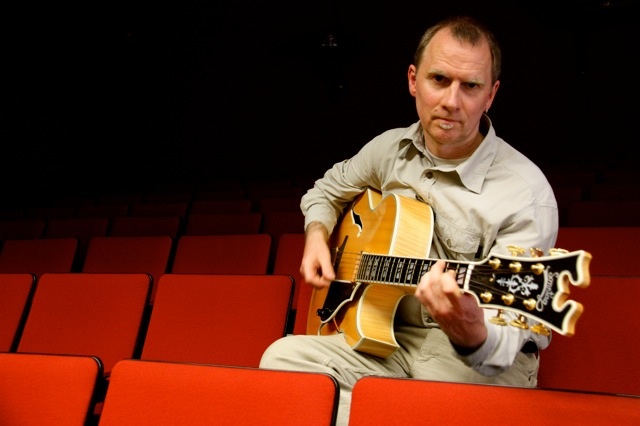 Touring in France, Belgium, Switzerland, Holland, Italy, Poland, Denmark, Germany and the US, Arlt`s music has been showcased on a variety of radio and tv programs. Michael Arlt is an assistant professor at Hochschule fur Musik in Wurzburg, Germany and taught at a number of jazz workshops/clinics/etc at Berklee College of Music, Boston.

Before that, I fell in love with the music of Charlie Parker and, apart from that, too many to mention.

I knew I wanted to be a musician when... I discovered pop and rock music in the early '70s.

Your sound and approach to music: My sound in my head is like this: It is full, warm, punchy, dynamic, clear, a distinct center with fluffy edges; equally rhythmic, melodic, harmonic—each takes the lead in turn. Sometimes the phrasing is the center. I like it to be daring or overflowing, with some kind of abandon. There is a strong forward motion or if the mood is mellow, a pulse...

I hope at least some of that reaches other people.

My approach to music is communication: acting, reacting. Being provocative, sometimes; being receptive others. Trying to appeal to the ESP in my fellow musicians and everyone else listening.

Your teaching approach: Know your strengths and weaknesses, and work on them accordingly.

First, I'm listening to the student for general things, positive and negative, that spring up right away, like good rhythmic ideas,too many notes, nice sound, and that seem of relevance to their development at the moment. I make them aware of these things and that often helps to maybe advance their playing a bit right away.

But I'm pretty meticulous about knowing your instrument, so I always set up a route to empower the student in that respect—a short/medium/long term plan. The guitar is too multi-dimensonal not to have a plan in that field.

If you want to improvise, I think it is very important to be aware of the single steps—everything from hearing an idea in your head to the complete performance of that idea on your instrument—and how you can and have to work on each of those steps to become a more complete and eventually a free(r) improviser.

Well, actually, I just recorded with one of my dream bands: I recorded for my next CD with Portinho Trio—pianist Klaus Mueller, bassist Itaiguara Brandao, and drummer Portinho—which is about as good as it gets when it comes to Brazilian music. Working with these guys on my compositions was something else.

In the past I was lucky to have worked with people that would all be dream band candidates for me, like Red Holloway, Houston Person, Paquito D`Rivera, Keith Copeland, and a few more .

Since I am a fan of the drums—and that connection is very strong and important for me—everything else revolves around drummers. Jimmy Cobb and Charlie Persip are at the top of my list. And Jimmy Wormworth. I think it is too bad that I never had the chance to meet Philly Joe Jones, Art Taylor and Billy Higgins.

Well, apart from those rare occasions where I didn`t get paid or I played the last engagement in a venue before it closed down...

At one time during a tour with lots of traveling, we had checked into a hotel early and after some trouble at the reception desk because of a missing reservation, we were looking forward to a relaxed day, a bath and a nap before sound check. It was only hours later that I discovered that I had mixed up the dates: We were expected to play the club there the next day.

We had to get our drummer out of the bathtub and rush to the town where we really were supposed to play that night, went straight to the club and sound checked just in time for the first set.

I enjoyed playing at Cecil`s in West Orange, N.J. (drummer Cecil Brooks III`s club) very much. I think Bird`s Eye in Basel, Switzerland is great, and, in Germany, the Birdland in Neuburg, Jazztone in Lorrach, and the Jazzclub in Bielefeld are among my favorites.

That would be We Three, Moment To Moment !, probably. I like the combination of songs, how Dan and Scott are working together and the spontaneous things that happen, the interplay. And I like the overall sound of it.

Twin House, Larry Coryell and Philip Catherine. I bought it secondhand on a school trip to London, on Carnaby Street.

That`s a hard one... and maybe better for others to judge.

I started out as a pop music fan and my first musical influence was the British rock band, Slade. I had to have a guitar at that point.

If it should be out of print at that point I`d take Miles' Relaxin' (Prestige);

Charlie Haden/Quartet West, The Art Of The Song (Verve);

Charlie Parker, With the Orchestra: Live in Washington.

Alive and well, to say the least... artistically the music is thriving, it is really international with a lot of really great musicians from all over the world adding their own ideas and creativity.

The palette of emotions expressed by this music gets more and more detailed. There is something there for every situation or mood in your life and probably—if the music would be televised more—for a lot more people than currently are aware of it.

Jazz has influenced so many other parts of the sound landscape (and in general: other artistic expressions) and continues to do so.

Hard to imagine what everything would sound or look like without it. Didn't Lester Young, among many other things, invent the real meaning for the word "cool"?

Jazz is dead? Who said that? When did he/she say that? Where are they now?

Musicians with ideas and a desire to communicate;

It's really hard to imagine jazz could ever stop growing, after a hundred-plus years success story with many surprising turns.

Currently I'm working on a new CD of my compositions, with a Brazilian background. After the initial session together with the fantastic Portinho Trio, where we recorded the biggest part of it, I will be in the studio with different international guest artists to record the remaining tracks. Looks like the finished product will be ready sometime in 2011. You will read about it at All About Jazz, I'm sure.

Two years ago, I teamed up with alto saxophonist Johannes Geiss to follow our hearts and explore the music of Lee Konitz. After a number of successful and very rewarding concerts, the Johannes Geiss-Michael Arlt Quartet will be on the road in the coming weeks and month. Our current program, Sax No End: The Music of Lee Konitz, features music by Lennie Tristano, Johnny Carisi, Warne Marsh and Konitz.

My trio with pianist Bernhard Pichl and bassist Rudi Engel just made its first recording (also filmed two videos at the end of the session). For the upcoming concerts the No Drums? No Way! trio will have a few new songs, arranged by band members for that special line up.

Apart from that, We Three (with Hammond B3 organist Dan Kostelnik and drummer Scott Neumann)—my trio of 15 years and five CDs so far—will be touring in and around Germany for a few weeks in October-November 2011. Our Moment To Moment! CD was recently named CD of the Year for 2009, by the German guitar website, archtop-germany.de, and we will probably be in the studio to record the next step during that tour.

I work on my music by day and present it at night, mostly.

Any kind of musician would do for me, really; but if not at all, a photographer maybe? A jazz photographer.