Jesse van Ruller won the Thelonious Monk Competition in Washington in 1995. The jury, consisting of Pat Metheny, John Scofield, Jim Hall, Pat Martino and Mark Whitfield, was of the opinion that van Ruller is one of the most promising talents of his time. 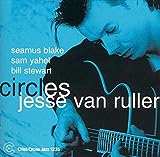 All About Jazz musician pages are maintained by musicians, publicists and trusted members like you. Interested? Tell us why you would like to improve the Jesse van Ruller musician page.