When pianist Jim McNeely replaced Hal Galper in the Phil Woods Quintet in 1990 it was the current winner—repeating in 1991—of the Downbeat Readers Poll as top jazz small group. But, as McNeely remembers, his first days with the alto saxophonist's band included a benefit concert for the local volunteer fire department in Delaware Water Gap, Penn. (where Woods has lived since 1974), a cancelled jazz club gig and playing at the wedding of Woods' friend.

"Well," Woods told McNeely afterwards, "we've had a freebie, a cancelled gig and a wedding. Welcome to the Number One jazz band."

When Woods brings his Quintet into Dizzy's Club this month the band, a quartet in its earliest incarnations and a quintet, first in 1976-77 and permanently since 1983, will be entering its 36th year with original members Woods, bassist Steve Gilmore and drummer Bill Goodwin. On trumpet will be Brian Lynch, a 17-year veteran of the band and filling the piano spot vacated recently by Bill Charlap after 14 years will be the fifth occupier of that chair, Bill Mays.

Woods' own career (he'll turn 78 later this year) predates the formation of the Quartet/Quintet by over two decades. He was an established star by the late '50s and right through the following decade, working with big bands led by Charlie Barnet, Buddy Rich, Dizzy Gillespie, Michel Legrand and Quincy Jones and appearing and touring with the Thelonious Monk Orchestra and Benny Goodman Orchestra, as well as sideman, studio and film soundtrack work and leading his own bands. Music fans beyond jazz have heard his solos on recordings by Steely Dan, Carly Simon and, most famously, Billy Joel's hit, "Just the Way You Are." Among his many honors are numerous readers and critics poll wins as the top alto saxophonist, a Kennedy Center Living Legends in Jazz Award, four Grammys and having a jazz label, Philology (in Italy), named for him.

Early in his career, Encyclopedia of Jazz author Leonard Feather said Woods "has inherited the Charlie Parker style and modified it to his own ends more successfully than almost any other alto man except Cannonball Adderley." But Woods is no Bird clone, in fact he has a distinctive and immediately recognizable alto sax sound marked by a sumptuous tone, superb technique and exceptional lyricism.

"What really knocked me out about Phil," recalled McNeely, "was that he could play a line and every note had a different inflection to it and a little different articulation. He never just ran out a string of eighth notes, he always was sculpting the line in certain ways with his melodic sense. He's got wonderful technique but the great thing there too is he doesn't hit you over the head with it; the technique is a means to a greater end, so it's not like you're hearing a guy with a lot of chops, you're hearing a great musician expressing himself fully. And Phil is such a strong player, especially with time, something we could really feel since we usually played acoustically, so it was like a chamber group except very high energy." 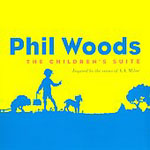 Catching up with Woods on the phone from his home at the Gap, he was busy adding arrangements from a trove of Al Cohn charts rescued from a dumpster—he's a member of the board of the Al Cohn Memorial Jazz Collection housed at East Stroudsburg University—to his computer as well as finishing up a commission from the (classical) New Jersey Saxophone Quartet which he is dedicating to his clarinet teacher at Juilliard, Jimmy Abate. And being home doesn't necessarily mean being inactive as a player, as Woods still helms a Pocono area big band that plays local gigs. He is preparing to record solos for a Philology album of his own songs and lyrics by singer Michelle Lombardi that was recorded in Italy. He's also looking forward to the imminent release on Jazzed Media of another project, one 40 years in the making, his The Children's Suite, inspired by the poems of A. A. Milne.

"Yeah," said Woods, "we finally got it recorded by my [8-piece] Little Big Band plus a string quartet, with singers Bob Dorough and Vicki Doney and readings by actor Peter Dennis. A local PBS station also videotaped it a couple of years ago and it should eventually come out on DVD too."

A suggestion that some new young alto saxophonists appearing on the jazz scene are today hailed as "the new Phil Woods," just like he was once hailed as the "new Charlie Parker," prompted this response from Woods:

"They listen to me and they're getting it second hand. Always go to the masters, the guys that invented this stuff: Bird, Louis Jordan, Cannonball, Johnny Hodges, Willie Smith, Pete Brown from Staten Island, a favorite of mine not often remembered and of course the great Benny Carter, one of the first cats I ever heard. I always tell the young players 'don't be a one trick pony,' listen to everybody, not just the most fashionable and the most popular. If you find me as one of your ingredients fine, but don't be myopic. I didn't just copy Charlie Parker, I listened to the alto sax played by people who knew how to play and made an amalgam of it all."

Woods has fond memories of his early years, the '50s-60s, when all the major labels had subsidiaries that put out big band and orchestral projects. He's proud to have worked with such leaders/arrangers as Manny Albam, Oliver Nelson, Ralph Burns, Quincy Jones, Neal Hefti, Bill Potts and Johnny Richards.

"God bless Mosaic [the reissue label] for making Oliver's and Johnny Richards' wonderful stuff available," he says. "I remember subbing for Gene Quill [his partner in the two alto sax quintet of the time, Phil & Quill] in the Richards band at Birdland. After playing until almost 4 am, Johnny would bring out new arrangements and we'd rehearse until breakfast time. That's when giants walked the earth." 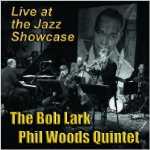 Many fans and musicians would say that Woods is also one of those giants of jazz, notably Paolo Piangiarelli, who named his record label, Philology, for Woods, dedicating the label to "documenting authentic legends of jazz [mostly Woods and fellow alto legend Lee Konitz] and preserving the music of this genius of jazz." The Phil Woods discography on the label numbers 40 albums and counting. Goodwin has lost count of the recordings he's done with the Quartet/Quintet, Little Big Band and Big Band, but he says the band's book has over 300 charts and is constantly expanding.

"Phil's band is almost a writer's workshop," says McNeely. "He likes to play a lot of different kinds of things and wrote a lot himself as well as encouraging us to write. And it was great to write for a band with such a constant personnel, you know everybody's strengths and weaknesses. And everyone in the band could read so well that we could run a tune at a sound check and then begin playing it on the gig right away. When I was leaving the band and Phil and Bill decided to record a whole album of my works [The Phil Woods Quintet Plays the Music of Jim McNeely on TCB], it was like a classical composer being asked to do an album for the Emerson String Quartet or some other really established ensemble, a real honor."

Woods has a busy schedule this spring, from an April appearance at Jack Kleinsinger's Highlights in Jazz series to dates in Europe, but he's not very sanguine about the future of jazz these days. "Europe is pretty quiet and it's going to get worse," he predicts. "A festival in London just cancelled and that's just the tip of the iceberg. European festivals have kept American jazz musicians alive for years but I have a feeling it's over, we're getting to the swan song, the bread has dried up and there won't be many more straight-ahead jazz festivals."

But meanwhile, Woods is more optimistic about his local jazz scene in the Poconos, where he's looking forward to the 33rd annual Delaware Water Gap Celebration of the Arts (COTA) festival in September, an event he co-founded with trombonist Rick Chamberlain, and to reviving a jazz summer school that has been "my dream since the jazz camp we had in New Hope in the '60s that Michael Brecker, Richie Cole and Roger Rosenberg attended. And I'm also doing another 10-day residency at DePaul University in Chicago in May, working with Bob Lark's student big band. So my plate is pretty full."