Patricia Scot: Once Around the Clock

By Samuel Chell
August 1, 2009
Sign in to view read count 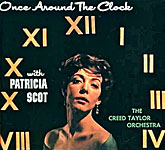 This reissue has at least two pleasant surprises: first, the revelation that, before discovering and promoting the gold mine that came to be known as smooth jazz, Creed Taylor was a musician of impeccable taste and discrimination; second, the rediscovery of an original vocalist/pianist who once toiled in piano bars in the Chicago-Milwaukee corridor as well as New York City but who, though still active, has fallen from sight— unfortunate for discerning listeners.

It was Taylor who decided to present Patricia Scot as a "stand-up" vocalist. Based on this early-'60s recording, his faith was not misplaced, even if his timing was less than optimal (the sort of rare American Songbook tunes on this recording—some of it classic esoterica—was rapidly being drowned out by popular music of the time). Nevertheless, the tunes and vocal stylings on Once Around the Clock—the title track a little-known Sigmund Romberg-Oscar Hammerstein gem—clearly deserve another hearing.

"Where Are You?" is not the familiar Jimmy McHugh tune that served as the title song for one of Sinatra's distinguished concept albums (from Capitol, 1957): instead, it's a rarely performed song by another American composer/giant, Frank Loesser. Also especially welcome is "You Leave Me Breathless," which had been planted in the consciousness of jazz listeners by tenor-saxophonist John Coltrane on With Red Garland (Prestige, 1957). Here, it's freshened up with a vocal treatment that's brighter than the preceding version, picking up on the occasional double-time feel previously supplied by drummer Art Taylor and bassist Paul Chambers.

Scot's vocal quality is live and vibrant yet widely expressive, ranging from humorous ("Speed of Light") to intense and deeply felt (Noel Coward's "Mad About the Boy"). The vocal register, timbre and vitality are suggestive of a hip Julie Andrews, but the urgency and sincerity recall Billie Holiday.

Comparing George Gershwin's "Do It Again" as performed by Diana Krall on When I Look in Your Eyes (GRP, 1998) with Patricia Scot's version is a study in contrasts. The former is sultry and torchy; the latter is sincere, almost innocent, and without a hint of pose. The reissue is also a reminder that the LP format encouraged artists to be resourceful, omitting needless repeats and pointless instrumental choruses. Like Peggy Lee's definitive recordings from this period, the tracks are half the length of their CD counterparts, yet not a single note is wasted. There's no sense of obligation to produce 80 minutes worth of material simply because the format supports it.

The Creed Taylor Orchestra is equally resourceful, a downsized group of jazz all-stars, featuring a woodwind section of Phil Woods and Jerome Richardson; trombones including Jimmy Cleveland and Frank Rehak; and one of the all-time greats, Don Lamond, on drums. For those familiar with Creed Taylor's recordings in the 1970s, there's little about this session that marks it as a Creed Taylor project. The album is none the worse because of it.

Just Once Around the Clock;. Where Are You (Now That I Need You); Nothing at All; Why, Baby, Why?; Let's Sit Down and Talk It Over; Speed of Light; You Leave Me Breathless; Do It Again; Wandering Swallow (La Voyageuse); Mad About the Boy; Get on Board (Little Children); Out of This World.