BY GLENN ASTARITA
August 1, 2009
Sign in to view read count 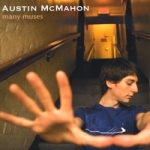 New England area drummer/composer Austin McMahon's musicality breathes life and radiates a fresh approach to modern jazz, partly based on neo- classicism and multi-genre derivations here, on his debut as a leader. The artist communicates an abundance of interesting propositions and aims to entertain.

McMahon is a melody-maker and provides a buoyant pulse along with bassist Kendall Eddy. Clarinetist Alec Spiegelman is the primary soloist and works effectively with pianist Carmen Staaf, who combines lush romanticism with some muscle on various pieces that are engineered upon bop and quaintly arranged frameworks.

With frisky, up-tempo cadences, the clarinetist often generates a carefree aura during several works, yet the quartet skirts the free-zone on occasion. But it's the harmonious themes, contrasted by expansion, and contraction mechanisms that offer a nouveau setting. Many Muses serves as a fitting album title, despite the musicians maintaining a cohesive group-centric sound.

On "Sevilla," McMahon merges a sense of Spanish chivalry with traditional Jewish music that is firmly nestled within the progressive jazz schema, largely due to Spiegelman's edgy soloing. However, the overall muse changes via a dirge motif, heard on "Proof," driven home by Staaf's lower register block chord progressions and Spiegelman's whispery lines.

As stated on his homepage, McMahon has been sought out for his work as a composer for documentary films, and listening to this album it is easy to discern why. He imparts a prismatic outlook into his compositions, marked by memorable themes, and the soloists' intense exchanges. The quartet profoundly merges many muses into a clear-sighted and highly listenable program.