BY JAKOB BAEKGAARD
August 1, 2009
Sign in to view read count 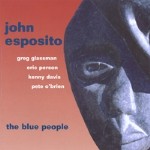 Blue is the color of the blues. It's the mood of sadness and tranquility. It's the freedom and infinity of the ocean and the open sky. It's the rhythm and roots of jazz. The future and the past coalesced into a moment of improvisation.

Pianist John Esposito's The Blue People seems to unite all the aspects of the color blue. The music on the album has the sweep of history while still being able to sound totally fresh. It's pure, challenging jazz music, which ought to have a broad appeal to those who have grown tired of straight standards and worn-out clichés, but who still want music within a recognizable historical frame.

Nevertheless, Esposito is a well-kept secret to the initiated few who speak of his music in glowing terms. To those in the know, his Sunjump label has become a reliable source for music that connects the threads of past and present with both new and historical recordings being published.

The Blue People is one of the label's most important releases in that it presents all original material from Esposito, where diverse influences—ranging from African music, modern composition and classical baroque to swing, bop and avant-garde—melt together into a forceful, coherent expression.

The lightning fast notes of the opening "Boppin'" bring to mind Charlie Parker's sophisticated train of thought, as Esposito's hands moves swiftly across the keys without losing track of the music's emotional content. Humor is also present on the funnily titled "Just Fiends," which plays on the standard "Just Friends." The musical content, however, is anything but standard, with a rhythmically complex exotic groove anchored by bassist Kenny Davis.

Contrapuntal technique is used on the title track, with saxophonist Eric Person and trumpeter Greg Glassman weaving lines in and out in a fiery tribal dance.

"Joan" is a shimmering ballad with crystallized accompaniment from Esposito and spine-tingling blowing from Person, while "Fast Ride" is exactly what the title implies: a fast, unconventional blues on which the rhythm section of Davis and drummer Pete O'Brien get the chance to flex their muscles.

Whether playing breakneck-tempo blues or slowed-down ballads, Esposito's compositions maintain an originality which rises out of both intellectual and emotional knowledge of jazz and its history. It's blue music played inside out.