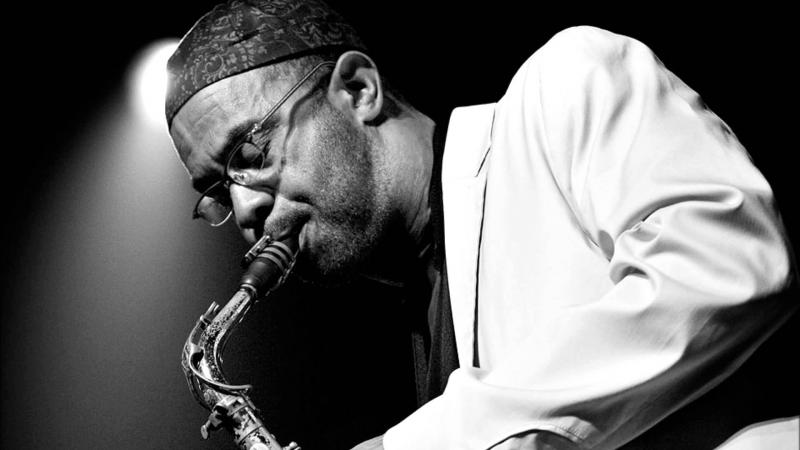 BY CRAIG JOLLEY
October 9, 2016
Sign in to view read count
This interview was first published at All About Jazz in April 2002 and is part of our ongoing effort to archive pre-database material.

First tier alto saxophonist Kenny Garrett is notorious for his energy and for his ability to spontaneously compose (improvise). He announced himself twenty years ago in the bands of Freddie Hubbard and Woody Shaw and came to even greater recognition with Miles Davis' late '80s band. Happy People is Garrett's latest in a string of varied, uncompromising Warner Bros. releases. There is a prominent Asian feel to many tunes, but the CD is definitely jazz with continual doses of swing, unpredictable solos, and the blues. Garrett's quartet features Chris Dave, another in the seemingly endless stream of happening young drummers, who brings a startling new propulsion to the ensemble and to his musical exchanges with Garrett.

We've been together about a year. Chris Dave, the drummer, is on my last CD, Simply Said. When I started writing the music for Happy People I wanted a bassist who conceptually would understand what I wanted to do. Charnett Moffett's been my friend since he was about 17 years old. I decided to call him. I knew he'd be able to hang with Chris. Chris is very energetic; Charnett is very energetic. I needed both of them to be on the same level. I like Vernell Brown because he's developing his own style. Not only that, he's a contrast to what I'm doing. When I finish playing he"s taking it somewhere else. It's like what Miles used to do with Cannonball Adderley and John Coltrane. He would play very melodically. Trane would come in "wa-ha-ho," and Cannonball would do his thing. It's a contrast—that's what I like about the band. Not only that—we can go in so many different directions. We're all coming from a different place in the music. For example Chris listens to a lot of a hip-hop music. I listen hip-hop too. So if there's a beat I hear I say to Chris this is what I hear. Right away he knows what it is. Tony Williams is his man—Chris knows about jazz and knows about hip-hop. Not only that he knows about this music in general. We can go in any direction-free style, be-bop style, whatever style. That's what Kenny Garrett's music is about—being free and expressing in all those different genres of music.

Since Songbook I've been concentrating on writing strong melodies. I want to try to establish new jazz standards. I hope someone will like one of my tunes and say, "I might want to record that on my CD." Actually that's already come to fruition. I have two songs already in the new jazz standard book. That's what I'm trying to do—establish something a little different as opposed to playing the same old songs over and over. Every record has a different theme. Some records I focus on improvisation; sometimes on just melodies; sometimes I focus on just being simple. It's not about playing all the harmonic devices I know.

"Ain't Nothing But the Blues" is basically a hip-hop beat, but I was thinking about John Lee Hooker. How would he approach this? It would be modern—it wouldn't be like "I lost my woman" or something like that. It would be more positive, happy. Guitarist Randy Razz is a friend of Chris. There was no rehearsal. He just came down, and that was it. I wanted to have a melody in the baseline and a melody on top, a countermelody. On "Tango in Six" the melody is inspired by Miles Davis, and the rhythm of is inspired by Dave Brubeck. It's kind of meshing of those two styles of playing. There's a song I wrote for my daughter called "Halima's Story." She loves music, and I wanted to write a song for her. Right now she's into hip-hop, but when she gets older she can come back and say, "Daddy wrote a song for me." Sometimes around the house she'll practice her music. I try to make it fun. You know how kids are—they don't like to do anything that's work. I ask her, "Why don't you play this chorus for me? Why don't you play the rhythm from "Tango in Six" because I need to practice this." It's fun just to keep her interested. "Hole in One" is written for Tiger Woods, but also I was thinking about Woody Shaw who was one of my mentors. I'm not really a golf addict—I just watch because of Tiger Woods. A lot of people watch because of Tiger Woods. I decided he's inspiring people, and I'd like to give something back. This album is about people inspiring me. I want to inspire people. Woody Shaw had a tune called "Rosewood." I used to love that song.

I've been interested in Asian music for a long time. This is my first CD that with so much Asian influence. Even on my last CD (and the one before that) there was some but not as consistently. It's like seven tunes out of eleven, but I didn't realize it until after the fact. I was really just writing music. "Song for Difang" was written for an eighty year-old Taiwanese aboriginal. I heard a CD of his when I was in Taipei. I really enjoyed his music" it's very spiritual. Somewhere I got the idea of putting beats to his music. It's interesting not only for commercial sake but just for the fact that there are some songs you can hear just how they would involve the beats. I'm not sure if he knows who Kenny Garrett is but there'll be a song for him. "Happy People" was basically a thing where I was watching the 2000 Olympics in Sydney, and I saw Marion Jones crossing the finish line. Her face just lit up. I said she must love what she's doing—she's a happy person. Not only was this song for her it was for all the happy people. The whole event was a happy event. It also has an Asian theme to it—gospel, Asian, and funk. "Song #8" was inspired by Japanese rhythms and melodies (sometimes Japanese chords I'm not really crazy about), and it's based off "Cherokee" which is a jazz standard. Once you put that vocal on it it changes the perception—what is that? It's jazz, but check this out. "Thessalonica"—I can still kind of envision being in Greece. I wanted to write a song that had that dark, medieval feel to it but still have a happy overtone to it too. It's like [sings] "dah dah dee dah"—kind of exotic sounding. Then we go to this place where we play in seven. Then there's "Brother B. Harper," the longest track on the CD written for Billy Harper, tenor saxophonist. He's very underrated" he's never had any major record deals. He's actually into Japanese culture and language too. I remember going to hear him in Washington D.C., and his music was very spiritual—it had a lot of gospel vibe to it. This one has an Asian melody and also has a gospel vibe to it—not in the sense of straight gospel but spiritual, a Coltrane kind of edge to it.

That's my man there. Just by his presence he contributes. I think he's one of the most underrated musicians. For me there are four guys: Herbie Hancock, Bobby Hutcherson, McCoy Tyner, and the late Joe Henderson. When they play they sound like they're playing the blues. I like watching Bobby because he's having so much fun, but he's still playing this profound music. I had an opportunity to play on his latest CD Skyline (Verve). I wanted to return the favor. I wanted him to come into Kenny Garrett's world and check out some of the music I've been doing but not play on just straight-ahead tunes—play on something different. I didn't think of bringing in vibes to accentuate the Asian influence—it was just coincidence. I met him in New York and played him some tunes on the piano. I asked which tunes he would like to play on.

My roommates at one time were Mulgrew Miller and Tony Reedus. They played in Woody Shaw's band, and I used to always go hear the band. I don't think Woody was hearing the alto saxophone—he was always hearing the tenor saxophone before I joined his band (same thing with Miles). I love the way Woody played harmonically on his instrument. It was different—reminiscent of John Coltrane in some of the harmonic devices he was using. It wasn't a long period, but I learned a lot from him. At the time I was playing with Woody I was also in Freddie Hubbard's band, Art Blakey's, OTB, and I was playing in my own band: five bands at the same time.

Growing up in Detroit all tenor player sounded like Dexter Gordon, all the alto players sounded like Jackie—that's the way it worked. You say Jackie because of Charlie Parker. I remember one time I was playing the Mount Fuji Jazz Festival in Japan. Jackie told me, "You don't sound like me; you sound like Cannonball—actually you sound like Kenny Garrett." It's interesting, but Jackie's influence is there.

I think they're important. Lately I've been doing a lot more teaching—before I didn't do it because it was so time-consuming. I found by teaching I was learning about myself. The things you're instilling in your students—these are things you have to do anyway. It comes back to you. If you say it you have to do it.

My thing is I want people to be entertained. I don't play tunes just because they're on my latest CD. In live performances I kind of combine all the CD's, and I play new songs. Sometimes people request songs that are not in the set list so we just play them all.

I kind of sing at the piano—that's how I come up with my melodies a lot of times. I can usually tell a strong melody. I'll play it then go away and do something else. When I come back if it's still holding my interest I know it's a strong composition. The night you were there [Catalina's night club] I had just written that first tune we played. I got to the piano and played it, and the band conceptually already knew what I wanted to do. That's the way I hear music.