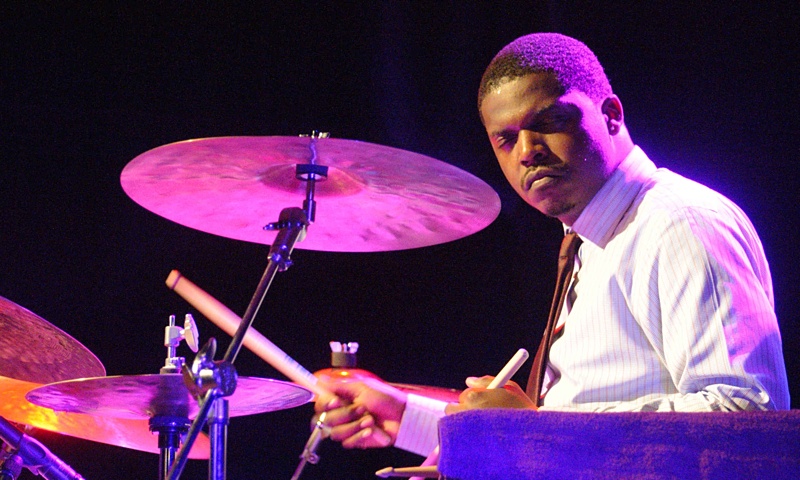 By PAUL NASER
April 10, 2014
Sign in to view read count
The rare balance of passionate ambition and mature dedication that are the hallmark of young professionals puts them in a category all their own. More often than not they began honing their skills at an early age and it seems as if life conspired to help them succeed. Justin Faulkner, the young drummer for the legendary Branford Marsalis's band, has a story that fits this description to a T.

At 23 years of age, it's remarkable how many achievements he has under his belt. Yet one of the first things one notices upon talking to him is how humble and genuine he is. Whether he's expressing gratitude towards the many people and experiences that led him to where he is or excitedly discussing one of his favorite drummers or records, his honesty is refreshing. I was fortunate enough to get to ask him a few questions about his background and some of the things that reveal who he is as a musician.

Faulkner was born in Trenton, New Jersey, but as he puts it: "I was there for all of five seconds. I'm from Philadelphia." His affinity for music emerged while he was still a toddler. "Well, I started banging around the house with pots and pans and spoons at the age of three and destroyed several kitchen sets of my grandmother's. Then, around maybe six months to a year after, my mother bought me a drum that was made by the company Fisher Price, and I played on that and I beat that to death. She bought me my first kit when I was about, I'll say five-ish."

"I started taking formal lessons when I was about seven or eight. While I was still in elementary school, I was awarded a scholarship to the Settlement Music School, which is a private music school in Philadelphia. I started taking lessons there at age seven, and I think I was there from age seven to about age seventeen, for about ten years. I originally started playing gospel music. That was the first music that I kind of related to because that's what my parents listened to along with many other styles of music. I then started learning classical music; I was a classically trained drummer originally. I started playing classical percussion around age nine or ten, starting with the practice pad and getting the initial technique together. From there I played my first professional gig when I was thirteen."

This gig was an important opportunity for Faulkner, and though he doesn't frame it as such, it was a pretty heavy one. "[It was] with a bassist named Jamaaladeen Tacuma. He's a psychedelic, jazz, funk bassist. He played with Ornette Coleman's band prime time, and he has a band now with Vernon Reid from Living Color, and a drummer named Calvin Weston. They have a band named Free Form Funky Freaks. He's incredible. He kind of established the idea of groove for me because that was a foreign thing. I was used to people letting me play whatever my heart desired rather than keeping some type of beat for everyone to dance to. I played with him every Friday for about a year and a half at a place called Cafe Harlem. It was located in the Eden borough, which is like right outside of Philadelphia, maybe 10 minutes away. Then little things started to reveal themselves."

Faulkner's early experiences in music both indicated that he was going places and provided him with the opportunity to get there. "Like I said, I started taking lessons when I was 7 and then once I was in that particular music school, they could see that I kind of didn't want to play classical music and that my forte was drum set, so they transferred me to another teacher named Shan Rittenburg, who I studied with for the duration of my time at Settlement music school. It's odd, little gigs started coming here and there. My school band studied with Jimmy Heath; well, our quartet backed him up for the all Philadelphia Jazz festival."

The Philadelphia jazz scene was and is a very rich one, claiming as its own such legends as John Coltrane and Clifford Brown. Growing up musically there allowed Faulkner the opportunity to be steeped in tradition and learn about the music first hand. "I was playing with a lot of the older musicians of the Philadelphia scene. I met a guy named Bootsy Barnes, who was really influential for me; because of him I learned every Hank Mobley tune, every Lee Morgan tune and every Cedar Walton tune, because those are the tunes we would play. He would say, 'Hey, you know man, you gotta learn these tunes.' And I was looking at him, thinking, listen I will probably never play these again, and lo and behold, I'd go to jam sessions and everyone wants to play "Firm Roots," everyone wants to play "Roll Call." I was like, well, looks like this paid off."

"I was playing with them between the ages of thirteen and fifteen. They would call me to play little banquets, or some gigs actually. We would play little small jazz series within the tri-state area. When I was 15 I met Orrin Evans and I was working with him through the settlement music school. He was one of the directors of the jazz program there. I guess he saw something (laughing). I'm gonna just assume that's what it was. He saw something that he liked in my playing. He had a weekly jam session that he would play and he asked me to do a lot of them. I did the majority of them for about a year and a half before it was no longer a factor at that particular club."

"During the time of me playing the jam sessions, Eric Revis came and played one of the sessions with us, because he was also playing at Orrin Evans' yearly birthday party that he does at Ortlieb's Jazzhaus, which was like one of the most prestigious jazz clubs in Philadelphia, it's where everyone used to go to after their show, they'd go over there for the late night set, because there's a really great jazz drummer named Mickey Roker who played with the Modern Jazz quartet and Lee Morgan and a bunch of people."

"He was playing a jam session with a bassist named Mike Bloomfield who was very influential as well, and a pianist named Ted Simmons, R.I.P., he passed away a few years ago, and that was the house band. That was like the learning ground for everyone. Everyone feared the stage because they knew that you could go on stage and just play anything."

"Also around that time, I was in a group called the Kimmel center youth jazz ensemble. There's a huge performing art center called the Kimmel center, there in Philadelphia and they had a big jazz program that was incredible, it was headed by Mark Johnson, who was probably one of the greatest educators that I could have been mentored by, he completely changed my thought process, and like how to approach music and he actually taught me how to read Jazz charts as well."

"I started playing in a few of his groups that he (Evans) would put together and recorded a DVD with him, and actually I went on my first tour with him and a vocalist named JD Walter. JD's based out of New York; he's a great vocalist. He deals with a lot of electronic pedals and loopers with the voice and it's really cool, really, really interesting. My first tour was with them two. We played at the Jazz Bakery before it was closed down, and then we played at this, it's like a jazz series, I think it's something, like the dynamite box, it's in half moon bay California. We also played the Kharkiv jazz festival, in Ukraine, which was my first overseas experience. Then shortly after, I met Branford Marsalis."

The pivotal moment in Faulkner's career could very possibly be traced to this first meeting, and Marsalis, like many before him, seemed to see something in the young drummer. "I met him at a master class at my school. We were part of this series called the Francis Johnson Project, which was basically talking about primitive instruments, from the early...I guess....I don't remember exactly a time frame, because to be honest we were in high school so we were kind of spaced out and not really into what was going on. We were just there because we had to be."

"After a while, after things went through a history of brass instruments, they started talking about chamber ensembles, which was always something that was interesting to me, percussion ensembles, string quartets and so forth. Then he started to explain how jazz correlated to the idea of chamber ensembles, and saying that you can have many of them, quartets, trios, septets and so forth. And so he says I'm going to bring in my cousin next weekend and he's going to do a master class. And the gentleman that ran the program, his name was Rodney Mack, happens to be one of Branford's cousins." "So Branford came in, and my high school jazz band played, and he ripped us a part. It was just....it was bad. We didn't sound really good, but we were all really cocky in a way, because we were probably one of the best jazz bands in Philadelphia, in terms of the schools, or so we thought. So he came up to us and he basically said, 'None of you listen to jazz. None of you. You don't listen to jazz at all. This doesn't sound like jazz. You're reading.' He just dissected each person's individual problems, and then he got to me and he said, 'Yeah, except you. You, I don't know what you've been doing, but you need to keep doing that.' I'm like, wow, uh, ok. I didn't expect it at all."