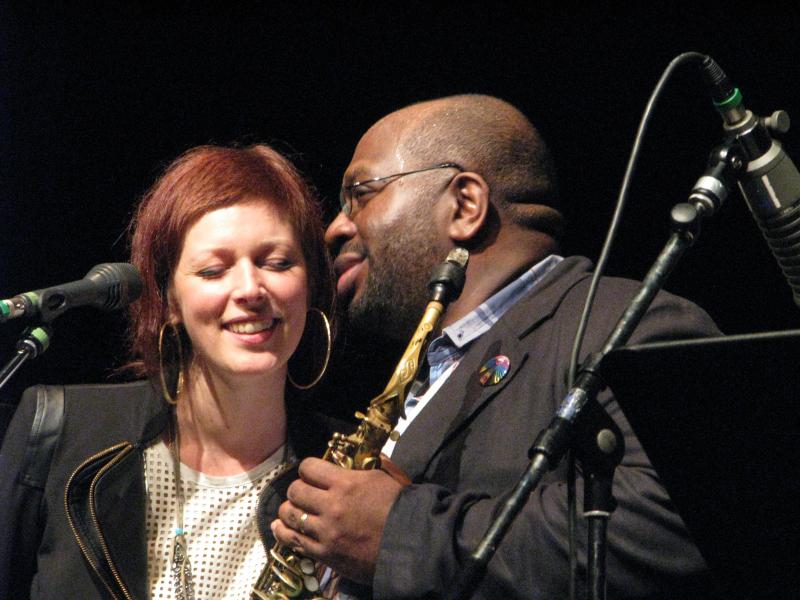 Jazzdor is a French festival with two annual editions. One is held in Strasbourg (France) in November and the other one in Berlin (Germany) in June. Both editions present a lot of bilateral or multilateral collaborations; an essential part of the festival's philosophy and policy. Strasbourg is the oldest, main edition spread out over two weeks in November, collaborating with the neighboring German city of Offenburg that also offers a stage for some bigger concerts held (for example, the Sound Prints Quintet of Joe Lovano and Dave Douglas). This year's edition started with the Tom Harrell Quintet on November 7 and ended with the new Charles Lloyd Quartet 'Wild Man Dance' on November 21. Two days, November 11-12, with four concerts are covered here: the Émilie Lesbros/Darius Jones Quintet, Jozef Dumoulin and The Red Hill Orchestra, cellist and visual artist Anil Eraslan, and a sextet around saxophonist Laurent Dehors with a program entitled 'Une Petite Histore de l'Opera.'

Darius Jones is a musician who approaches music mainly and strongly from the human voice in all its modalities, from its physical as well as from its psychological and social characteristics. For him the voice is at the center of our existence. This is also embodied in the way he uses and plays his instrument, the alto saxophone. Some may have some associations with the voice of Arthur Blythe and Canonball Adderly; an understandable link as long as it is no classification but drawn from the unique quality of every voice. Darius Jones is a member of the group of master drummer Nasheet Waits and the ground breaking group of Eric Revis, with Bill McHenry on tenor saxophone and Chad Taylor on drums. Jones recently released his pure vocal work The Oversoul Manual performed by The Elizabeth-Caroline Unit on American label AUMfidelity that also offers his other albums with amongst others pianist Matthew Shipp.

Émilie Lesbros is a person too curious, too energetic and too vocal-bound to restrict herself to a single genre, format, and language of vocal expression. She worked as a vocalist and multi-instrumentalist in various contexts, primarily to find her own dynamic vocal presence and expression. She engaged in eclectic musical projects ranging from rock to electronic music, led by an insatiable curiosity of the modalities and sounds of the voice. Her encounter and work with a great master of improvisation, bassist Barre Phillips, was of crucial importance for her to explore and expand her expression and presence in collaboration with other improvising musicians on stage. She is a member of Pascal Niggenkemper's group Vision 7 that released Lucky Prime on the Clean Feed label this year. She started to work with Darius Jones when she settled in New York recently. A collaboration of Darius Jones and Émilie Lesbros is quite obvious and a promising match.

When Lesbros hit the stage, energy levels soon climbed noticeably. With great ease la Lesbros slid through a variety of vocal formats, moulding her very own expression. There was no showcasing at work, but purely the dynamics of the music and vocal expression. It was a great pleasure to experience how she transcends and permeates different idioms and styles to let them merge. Where some vocalists draw from one specific language and its sounds, Lesbros in a way did the opposite by singing, talking, and shouting in different languages—not as a patchwork, but as a unified, dynamic form of expression. However, this was not a singer backed and accompanied by a group of instrumentalists. Darius Jones' forceful voice enhanced and contrasted Lesbros' vocals. Mitchell contextualized the voices' sounds and modes, whereas Niggenkemper and Smith created an adequate loose tightness, thus propelling, deepening and carrying the music. It was an impressive, convincing rendition of new original sound really worthwhile to pursue—witness an overwhelming appreciation by the audience. For the encore Lesbros took over the piano. Together with Niggenkemper's on his horned double bass and Jones she brought another forceful shot of joy.

Jozef Dumoulin's Red Hill Orchestra is a remarkable and without doubt unique musical entity. It makes use of a great variety of sources, but the music you get to hear enters an until yet unknown door. There is nothing comparable to it. Maybe only a vague association with early collaborations of Bill Frisell with Lee Konitz.

Dumoulin makes use of various forms of delay as well as the blurring and flooding effects the Rhodes provides, contrasted with the pointed sounds it also can produce. At a closer look (or listening) it appears to have quite mystical sonic qualities that distinguishes it from present digital electronics (and also from older synthesizers). Dumoulin explored the musical possibilities of these sound qualities on a recent Rhodes solo album on the Bee Jazz label and teamed up with Eskelin and Weiss for further travels into these new territories. The threesome could be experienced during the Strasbourg Festival as well as on the just released album Trust on the French Yolk label.

It is miraculous how Dumoulin's way of using and playing the Rhodes changes the perception of the acoustic instruments, the tenor saxophone and the drum set. Their acoustic qualities surprisingly come much more to the fore on the recording. It also happened during the live performance at the Pôle Sud Theatre in Strasbourg. The music ranged from dreamy to steamy and always had an estranged, almost surrealistic vibe: fascinating great music from the Red Hill interzone! Dumoulin, Eskelin, and Weiss are a marvellous orchestral team on this sonic travel between the known and the unknown. In Strasbourg the threesome succeeded to engross the audience in its remarkable liaison of clarity and fogginess. It also succeeded in perpetuating the fascination and curiosity about how the known and unknown relate to each other in the sounds. It deserved and got an encore for the musicians' return to the outside world.

Opera and jazz, they have a special and gritting relationship. Musicians as Sidney Bechet owed a lot to arias at the opera house in New Orleans. The aria influence is much stronger than a lot of jazz aficionados think or would like to accept. Miles Davis was fascinated by Tosca, but never succeeded to get his plans with Gil Evans realized. And there is more.

French reedman Laurent Dehors is a musical wanderer. He was affected by the potential of arias a few years ago. He has a strong tendency and a gift to convert things and organize a frolic orchestral spectacle. About four years ago he made it into reality, together with musical genius and pianist Matthew Bourne and a few other fellow musicians. A par force tour with a wild mix of arias, but how? With the woman as leitmotiv four centuries of opera with all refinement and vicissitudes of life, from bizarre intrigue, forbidden love affairs, marital infidelities, revenge, the urge for power, tragedy and death, to the first appearance of castrati and divas. A recital performed by a soprano, Géraldine Keller, and five musicians: besides Laurent Dehors, Andy Emler, Christelle Séry, Jean-Marc Quillet and Gerald Chevillon. Only six musicians, but they had to play a larger variety of instruments: bass saxophone, tenor saxophone, contrabass and contralto clarinet, trumpet, flute, banjo, electric guitar, piano, accordion, vibraphone, marimba, percussion, and drums.

The recital took place in the big hall of the theater L'Illiade of Illkirch-Grafenstaden, a smaller place outside Strasbourg. The big hall was remarkably well filled by a quite mixed audience who fully enjoyed the unrolling spectacle. The spectacle was the singing, moving between the instruments, and playing of the instruments. The dynamics and tempo of the musical action was so high it was indeed a lively spectacle, emphasized by the focus on unusual instruments: bass saxophone, banjo, clarinet accompanying an opera singer, a soprano. It worked surprisingly well, as did all the fast transitions and changes of instruments. It was not Gerald Chevillon, with the huge bass saxophone in front, who had the heaviest task, but Jean-Marc Quillet, almost invisible in the background, who had to move, jump, switch, beat and blow most of all. Most miraculous was the banjo plugged by Christelle Séry, which fitted in wonderfully. Well-known pianist Andy Emler subbed Matthew Bourne and brought in his very own gestures, well dosed and timed, and soprano Géraldine Keller who also played flute acted and performed brilliantly and with great flexibility. She is another French vocalist who is able to serve a broad musical range in a convincing way. And last but not least: Dehors blossomed in the spectacle that he created and conducted. It was a highly entertaining show on an extraordinary musical level.

Collaboration, voice/vocalism, and heterogeneity as a source and power of expression were the characteristic features of these two days of the festival. It turned out it not only worked well, but also presented thrilling possibilities through which the known gained new attractiveness or opened unknown doors (with old keys). Vocalism and instrumentalism, electric and acoustic, known and unknown, old and new rhythms—the performances showed that it is a (joyous) challenge worthwhile to really dig into and relate to each other in creative and productive ways. The results, the vibe, and the moods were clear and convincing proof of that.