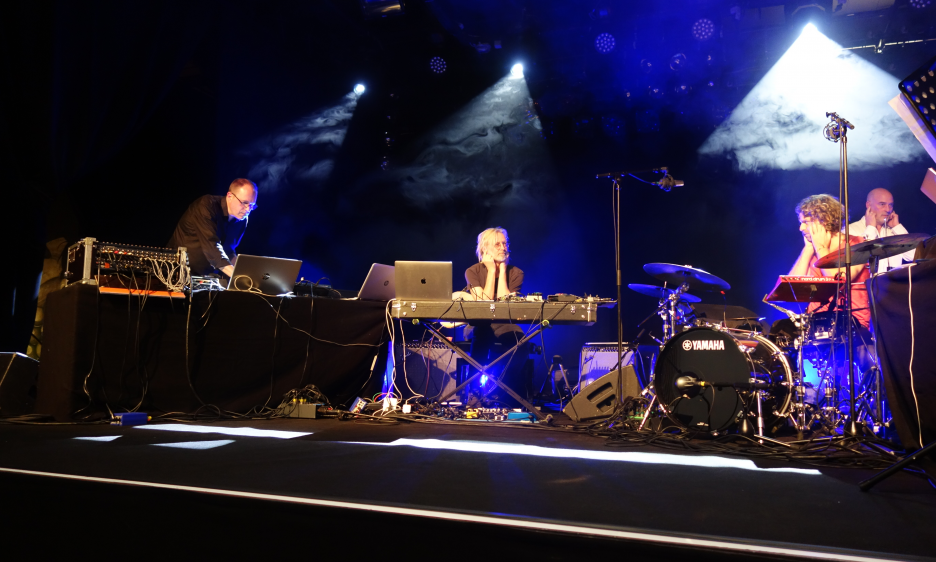 Enjoy Jazz And More this year lead me through two sections of its seven-week concert-series in October/November, with a great diversity of concerts ranging from seasoned German clarinet master Rolf Kuhn to advanced electronic wizardry and the archaic magics of Greek-New Zealand-Italian configuration Rewa to Bigband Jazz, to the wide inner landscapes and floating epic interzones of eminent Greek composer Eleni Karaindrou.

During the fall Enjoy Jazz is a major well-established event running through the industrial metropolitan Rhine-Neckar-region (2, 4 million inhabitants) in southwestern Germany. It stretches over a period of seven weeks in October and November with one and sometimes two or even three concerts daily. It entails a complex network of local and regional cooperation. Each concert is special and can be enjoyed and celebrated in its own right. This set-up clearly entails a different way of making choices and experiencing music, which has consequences for the programming, too. Generally speaking, the festival is characterized by a splendid diversity of coexisting facets of directions in jazz and neighboring kinds of music. Enjoy Jazz rests on a coalition of people from different societal areas that not only share a strong conviction that creativity, arts and culture are key factors for the productivity, stability and innovative potential of society but also distinguish themselves by their readiness to act on it.

This year's edition offered a rich, flexible diversity with a couple of special focusses and red threads. Jan Bang acted as artist in residence with four concerts. There was the 50-years ECM-focus with an exposition and seven concerts: the Carla Bley Trio as opening concert of the festival and concerts by the Yonathan Avishai Trio, Marcin Wasilewski Trio, Maciej Obara Quartet, the group of Peter Bruun, the drummer of Django Bates Trio, pianist Tord Gustavsen and the final concert of the festival with the ensemble of Greek composer Eleni Karaindrou. There was a Polish focus, a Heidelberg—Montpellier collaboration and a bold and refreshing initiative of Mannheim musician Alexandra Lehmler to set up units with musicians from different European countries, in this case a unit composed of musicians from Sweden, Italy, France and Germany to play together in this and hopefully more festivals—correspondance européene: deeds to words! The musicians and groups presented came from a widespread number of regions in Europe and from overseas: there were musicians from Greece, Romania, Turkey, Israel, Syria, Lebanon, Poland, Denmark, Norway, UK, Belgium, France, Spain, Italy, Australia, Canada, US, Cuba, Columbia, Brazil and of course Germany.

To start my attendance at Enjoy Jazz with Rolf Kühn was a deliberate choice and an eagerly awaited occasion to see this living legend in full flight. A nonagenarian now, Rolf Kühn is one of the few deeply dedicated and affectionate jazz clarinetists of the older generation sticking to (t)his single instrument through his entire long career. He IS his instrument, which could be sensed strongly in his concert at Alte Feuerwache (former station of the fire brigade) in Mannheim. What made it so precious was his deep identification and joy with his instrument's colors and the rhythmical sophistication and intensity of his playing.

This goes together with his sense of drama and humor, his ability to build up suspense, and his qualities as a bandleader. That he played pieces that highlighted the strengths of the clarinet, from balladeering to Ellingtonian junglesque runs, and a rendition of Billy Strayhorn's "Take the A Trane" at neck-breaking tempo in the encore goes by itself. And, of course, there was a well-dosed underlying sentimental mood finely permeating all the joyful music played.

Kühn's robust quartet comprised well-known Colombian percussionist Tupac Mantilla and two Hamburg musicians, bassist Lisa Wulff and pianist Boris Netsvetaev. Mantilla showed an amazing capacity to integrate hand drumming and classical jazz drum set with rapid switches and fluent transitions between both. He also excelled in body percussion in duet with Kühn's clarinet. Wulf delivered lyrical finesse from her earthy tone and Netsvetaev made it all richly flowing. Kühn played for almost 90 minutes of full pleasure for the audience and himself. It's one of the characteristics of Enjoy Jazz to make this happen in a festive fashion.

Rolf Kühn, this extraordinary clarinetist and older brother of pianist Joachim Kühn, from a Leipzig family of circus artists grew into jazz shortly after WW2 under tutelage of pianist Jutta Hipp from the same city. Hipp left soon to New York to record for Blue Note. Rolf Kühn followed soon after to The Big Apple. Staying there for a couple of years he, among others, played with Benny Goodman and Billie Holiday, recorded with ((Jimmy Garrison}} and Elvin Jones, John Coltrane's rhythm section. In later years, a close musical relationship grew between both of the Kühn brothers and Ornette Coleman. While both Kühn brothers took different routes in life and music, they are still seen as a special unity in spirit and presence (there is a recent German 90-minutes documentary on the brothers by Stephan Lamb "Brüder Kühn—Zwei Musiker spielen sich frei (The Kühn Brothers—two musicians play themselves free)"—for the full-length version go here. Especially their keen sense to get (into) it, their presence and focused attention to the moment is characteristic for both of them, regardless of all differences: two unique artists with a unique life story. Joachim Kühn played a week earlier in a special duo with Archie Shepp at the Königsaal at the Heidelberg Castle.

Traveling through the realms of electronic shape shifting

Electronics is presently a wide area with a vast variety of approaches and manifestations ranging from serious new forms to abundant playgrounds. A concert without electronics will be hard to find and the number of cables, pedals, switchboards, knobs, controllers, laptops etc. is still increasing. Sounds can be manipulated, extended, distorted, loudened in multiple dimensions. Dark Star Safari and All Too Human were only two of a larger number of units heavily grounded on and in electronics. Both came from different ends and worked in different directions.

The Dark Star Safari concert was the end of a series of four concerts by/with Jan Bang as artist in residence. The series began with a live-remix of the Trondheim Voices, and continued with a concert featuring members of Ensemble Modern, one of Germany's leading contemporary music ensembles (see review here), and then a concert of a new combination of three with guitarist Eivind Aarset and drummer Anders Engen (see review here).

Dark Star Safari is a new egalitarian unit initiated by Berlin drummer Samuel Rohrer with song-driven music that emerged from extractions and reuses of recorded free improvisation. In a stepwise collaborative process, the four musicians (drummer Samuel Rohrer, sampler man Jan Bang, electric guitarist Eivind Aarset, and electronic engineman and here also keyboardist Erik Honoré) filtered, shaped and refined song-forms from it, into which were breathed life by Jan Bang's vocals and Honoré's lyrics. The stage is now for the songs learning to walk and to grow from their potential. So, we saw four feuerwache Safaristas on hot fire giving shape to the different characters of the songs. On the beating flow of the drums, they dived into a diversity of electronic frequencies coming from loops and live manipulations of sound. From deep space they masterfully conjured intermingling, emerging, expanding, shadowing, tumbling, shrinking and escaping sound waves touching to, and opening up, the orbits of the subconscious. This was the side that immediately captured and electrified the audience.

It appeared that the surprising vocal core of the pieces was received differently—from pleasureful reception, to slow immersion and surrender, to clear rejection. It took some time thus to get into the whence and whither, the oracular, menetekel character of Jan Bang's singing within shadows of memory, clouds of dreaming and silhouettes of foreboding. The most direct and powerful manifestation of this was in "Child of Folly," a masterpiece of a song with its far echoes of "Kashmir"-rock-riffs. It will be from here that the song side of DSS will be propelled, enforced and imprinted with its own character and indentation.

Quite a different affair was All Too Human of Danish drummer Peter Bruun, French electric guitarrero Marc Ducret, Danish trumpeter Kasper Tranberg and Simon Toldam on assorted vintage electr(on)ic keyboards. It came surreally tilted, was groovin' out high and cascading wildly from bleeping ants, trembling electric eels, whispering moose, lightning dragon teeth and yelling butter. It developed as continuing interplay of de-levering and straightening out with Ducretistic twangs -an enlightened escape from the burden of the Sisyphus paradox. It was reminiscent of so much experienced music from the past and resembled nothing. In short, it was a fully unsolvable musical puzzle solved with entertaining bravura. Through the interstices, a distant echo of the Kinks' "Death of a Clown" resounded. Next time, with disappearing tricks and tightrope act please!

The night the Bujazzo Big Band concert took place, the Alte Feuerwache venue was remarkably packed with an excited and eagerly awaiting crowd. During the show it became even clearer how much the audience liked this kind of work.

Bujazzo? It stands for Bundesjugendjazzorchester, Germany's Federal Youth Jazz Orchestra—one of the lengthy composite words possible in German such as Neckardampfschiffahrtsgesellschaftsvorstandsvorsitzender, a nice puzzle to sort out. The Federal Youth Jazz Orchestra is a German national young talent hotbed of the German Music Council. For a long period (1987-2006) it functioned under the direction of famous German brass-man Peter Herbolzheimer (trombone) (1935 (Bucharest)-2010 (Cologne)) and is now in hands of saxophonist Nils Klein (1978), teacher at the Cologne conservatory. The orchestra is open for young talent under 24 years old and membership is for two years. It offers a varied musical and business coaching program. German top musicians such as pianist Michael Wollny, pianist Julia Hulsmann and trumpeter Till Bronner all went through that school.

The current program of the ensemble presented is a program on the occasion of 100 years Bauhaus, the groundbreaking art school and stylistic revolution in architecture, visual arts and performing arts residing in the city of Weimar. The distinguished teachers who worked there included Walter Gropius, Ludwig Mies van der Rohe, Paul Klee, Wassily Kandinsky and Oskar Schlemmer, to name but a few.

The interdisciplinary project of the Bujazzo Big Band worked on assorted silent movie work, documentaries, advertising spots, early forms of cartoon movies, fabricated by pioneering Bauhaus school members as László Moholy-Nagy, Walter Ruttmann and Lotte Reiniger. Established musicians and composers were commissioned to write music for the Big Band and the vocalists of the Bujazzo to play live to the screening of this old film material. The film material has been archived by the George Eastman Museum in Rochester (USA) and has been made available for this project: