By Nenad Georgievski
September 12, 2014
Sign in to view read count 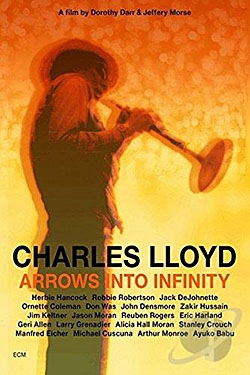 Undoubtedly deserving the title modern day saxophone titan Charles Lloyd has made one of the most important contributions to the art better known as contemporary or modern jazz. Widely recognized as one of the most timeless and significant musicians in the history of jazz, his melodic sensibilities, playing style and compositions have delighted listeners and have influenced generations of musicians. Easily one of the most influential tenor saxophonists, the sound of this venerable saxophonist is recognizable in a matter of seconds.

Directed by Dorothy Darr, Lloyd's wife and manager, jointly with Jeffrey Morse, Arrows into Infinity pieces together Lloyd's career by using rarely seen clips from stage shows, never before seen homemade clips and a plethora of insightful interviews. The film follows a simple narrative that traces Lloyd's career, but instead of just investigating record after record by an army of anonymous commentators that would dissect his oeuvre, Lloyd tells about his artistry, other musicians he has worked with, the highs and lows of his life with additional insights provided by Lloyd's contemporaries, co-workers and friends(like saxophonist Ornette Coleman, pianist Herbie Hancock, guitarist Robbie Robertson, drummers Jack DeJohnette and Eric Harland, pianist Jason Moran and his wife singer Alicia Hall Moran, producer and ECM head Manfred Eicher, producer and Blue Note label president Don Was or journalist and commentator Stanley Crouch, to name but a few) which help deepen and enliven his stories.

As the story is told, Lloyd was born in Memphis, Tennessee, and was exposed to jazz from a very early age as travelling jazz musicians, like pianists Duke Ellington and Count Basie or vibraphonist Lionel Hampton, would spend the night at his parent's house, as they didn't have where to lodge when in town. He received his saxophone when he was nine and soon he became hooked on jazz, by listening to late night radio broadcasts. Soon he learned the music from Memphis local notables like pianist Phineas Newborn, Jr., saxophonist George Coleman, and trumpet great Booker Little, Lloyd's closest friend. Very soon, as a teenager he worked as a sideman for bluesmen Johnny Ace, Howlin' Wolf and guitarist BB King whenever they played in Memphis.

In the late 50's, he went to study classical music at the University of Southern California with Halsey Steven where he received a masters degree in music. Equally important was the education he received at the LA jazz circuit where he played with luminaries such as Ornette Coleman, trumpeter Don Cherry, bassist Scott LaFaro, saxophonist Eric Dolphy. Soon he moved to New York where he played at the local clubs and in 1964 he became a member of Cannonball Adderley's Sextet. But in 1965 he left the band to form his permanent quartet which after several changes permanently set on musicians such as Jack DeJohnette, pianist Keith Jarrett and bassist Cecil McBee. It was interesting to hear Herbie Hancock reminiscing how he had to fill in for a whole week for a young pianist by the name of Keith Jarrett.

The band's first record was Dream Weaver (Atlantic, 1966) while the second Forest Flower (Atlantic, 1966) was recorded live at festival. At the time it was heralded as the first record to be sold in million copies. After all it received unprecedented airplay on the free-play FM rock radio stations. Later The Quartet was the first group to appear at the Fillmore Auditorium in San Francisco where it shared the bill with guitarist Jimi Hendrix, singer Janis Joplin, Cream, the Grateful Dead and the Jefferson Airplane. Rock musicians like drummer John Densmore of The Doors fame and Robbie Robertson of The Band give an insight of how the musicians from the rock world at the time looked upon his music. While Robertson played on Lloyd's second record Of Course, Of Course (Columbia, 1965), along with trumpeter Miles Davis' famed second quintet rhythm section, actually Lloyd played on the Doors' second post Jim Morrison record Full Circle (Electra, 1972). Very soon the band was invited to perform all around the world—countries of the Far East, the Soviet Union and Eastern Europe.

But in 1969 when he reached the pinnacle of success in the music world, weakened by drug use, his mother's death, feeling exhausted from a decade on the road and the craziness of the late 60's, he disbanded the Quartet and decided he was ready to pursue a quieter personal path. His longtime interest in Eastern religions came to the forefront and he spent most of his time and energy pursuing spiritual matters. During the 70's he withdrew to the Big Sur, the property he bought in California where he built a humble Japanese country house (his wife's first architectural project) and became a recluse, making occasional recordings that reflected his spiritual journey. As miracles do happen, it was the remarkable 17 year old French pianist Michel Petrucciani who coaxed him out of his solitude. Lloyd was so taken by his talent and being, that he was inspired to end the silence and return to the concert stage and active music making after 10 years. The result to this fruitful partnership was records such as Montereux (Elektra, 1982) and A Night in Copenhagen. (Blue Note, 1983)

That was the beginning of Lloyd's second chapter in music which saw him joining the ranks of Munich based label ECM with his new Quartet, a label for which he records regularly. The new Quartet consisted of pianist Bobo Stenson, bassist Anders Jormin and drummer Billy Hart who breathed new life for the look and the sound of Lloyd's music. As a result, even his sound had become more meditative with deep blues tinges sparkling within. Special attention in the film is given to the creative relationship with longtime collaborator and close friend, drummer Billy Higgins with whom he spent the last years before his death in 2001. Just before he died they recorded Which Way is East (ECM, 2004) which became Higgins' epitaph and the commentaries in the film were a bittersweet reminder of a deep and enduring friendship they had.

But unlike many artists of his stature and mileage, Lloyd never rested on his laurels. His insatiable curiosity has generated a constant flow of new projects like the project with master tabla player Zakir Hussain and drummer extraordinaire Eric Harland, titled Sangam (ECM, 2006) or the duet with Greek singer Maria Faranouri. But regardless of past achievements and his records attaining cult status, Lloyd is obviously very aware of the present times. Whenever he is reminded of the glorious days of Forest Flower or other bands he has fronted he reminds people of the formidable band he fronts now and the great music the New Quartet is making.

A portrait of an artist with an illustrious career as Lloyd's can be troublesome, particularly when the artist is as enigmatic and gigantic as he is. What the documentary doesn't try to do is to demystify this elusive and erudite musician—instead it offers an inner voyage through his emotions and thoughts on crucial events in his life. Arrows into Infinity is a reasonably fine documentary that is packed with insightful interviews, rambling but clean chronology and plentiful musical evidence.