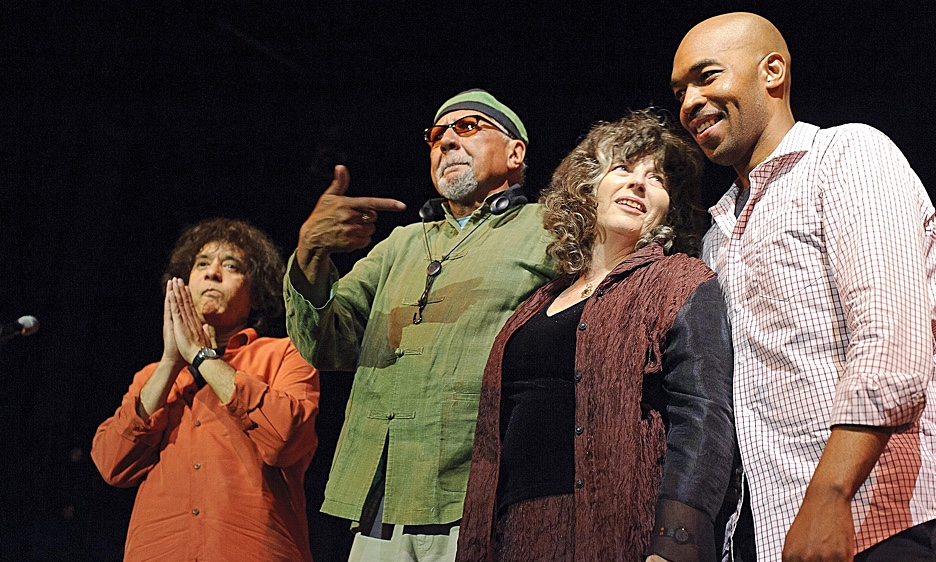 I heard Charles Lloyd's Forest Flower and fell completely in love with the music. I played it every morning, even in college. This music opened me up to jazz.
—Jessica Felix

It's a 20th anniversary vintage year for the Healdsburg Jazz Festival, pouring over the first ten days of this coming June, in the Sonoma County "wine country" 70 miles north of San Francisco. That there is a festival at all is due to the tenacity of its artistic director Jessica Felix, who planted jazz in Healdsburg twenty years ago and has kept working to sustain it. That Jessica Felix is at the center of the festival at all is due to the power that the music exerted over her, decades ago.

As a college student listening to Charles Lloyd's Forest Flower, she could never have imagined that someday Lloyd would embrace her as a friend on the stage of a jazz festival she produced, as he did in 2011. She could not have ever imagined that she would meet any jazz players, let alone become the workmate and comrade of many. It's as if the young woman in study hall who was outside the box became the queen of the jazz prom, much to her own surprise. The music had simply taken her over.

"My love of jazz started near the end of high school in the sixties," she remembers in a profile on the festival website. "I started listening to a little Cal Tjader and Willie Bobo while I was still loving rock and Bob Dylan. Then I heard Charles Lloyd's Forest Flower, bought the album and fell completely in love with the music. I played it every morning, even in college. This music opened me up to jazz.

"I had discovered that this was my music and I felt deeply in sync with it."

What drives her now, she says, is her "passion for the music and the people who perform it; how great they are as musicians and human beings; how lucky we are to have them." During the festival, although assisted by volunteers, Felix is everywhere in attending to every detail, a queen too busy to reign from a throne. Sometimes, she admits, she pushes others hard, who may not be so devoted to her passion, nor as understanding of her love for the music.

Over the years Felix has educated and challenged residents and visitors each year with offerings from jazz masters (Randy Weston, Jackie McLean, Charlie Haden, Roy Haynes) to innovative avant-garde (Pharoah Sanders, Oliver Lake) and blues and New Orleans roots (Charlie Musselwhite, Henry Butler, Rebirth Brass Band). She early introduced Esperanza Spalding and Joey Alexander. Felix presented Spalding, twice, in 2009 and 2010, well before 2011 when Justin Bieber's fans were outraged by Spalding's Grammy as Best New Artist. Felix signed Indonesian piano prodigy Joey Alexander two years ago when he was just 12-years-old and before he was profiled on "60 Minutes" and exploded internationally.

Unlike jazz clubs that can make up for one sparse crowd over many other weeks, or large festivals than have a main stage and can experiment among several other stages, Healdsburg risks it all across ten days in June. Getting there does require that seventy-mile trip from San Francisco and Oakland where other venues maintain jazz as a constant. Felix keeps the buzz alive in Healdsburg as a jazz destination by booking performers into smaller venues, often in combo or solo settings, maintaining pollination throughout the year. There are also presentations to the music programs in Healdsburg schools, planting unto the next generations.

Healdsburg is a town of wine country comfort more geared to elegant background dinner music rather than jazz at all. The surrounding vineyards generally feature the hardy zinfandel and the sensitive pinot noir grapes. Vines grown under stress, in difficult soil or with slight irrigation, can yield the most intense and flavorful wine. Similarly, the Healdsburg Jazz Festival has grown through stress to become a fertile geographic outpost for jazz.

After 2010, Felix had to fend off a board that did not share her vision amid economic uncertainty. Continuing deficits had caused the festival's board of directors to suspend the festival and dismiss Felix, questioning whether her artistic vision was sufficiently marketable, even as her bookings included Charlie Haden, Ravi Coltrane, Jason Moran, and Esperanza Spalding. An outpouring of support for Felix as the heart of the festival reinstated her as artistic director, with a different board, and National Endowment for the Arts assistance. Most of the musicians in the 2011 "benefit year" stepped up to perform at no fee to help provide a financial base for the festival to continue.

Felix admits that booking the festival now contains the same tension between art and commerce that caused the unrest of 2010, although relationships which grew strained have been restored. No one questions Felix' dedication and taste in jazz, but her purist preferences sometimes are too far ahead of more generalized ears.

She says she always has to hold back from the "out there" concerts she would like to produce, while keeping things edgy, challenging, but acceptable. A continuing question is how to position younger performers and draw younger listeners to the music, while maintaining an older fan base.

But whether presenting new talent or continuing masters, Felix must somehow overcome blank expressions of "Who?" and "What?" An audience may be reluctant to investigate talent that is emerging, but who have not been heard before. Talent that is legendary may have grown obscure. Is the purpose to challenge, or entertain, or both?

Somewhere in all that Felix finds a balance, she says, but cannot articulate any set formula. "It's always a gamble," she says, "to be a creative beacon. The economics are always on edge." She finds solace in that she has endured, as have her attachments to the musicians. "I've done this for twenty years," she shrugs. "That's a kind of success."

But even Felix can grow nervous with her experimentation. At the end of a concert in 2016, Felix was moved to congratulate her audience. She had been fearful they would flee from a presentation anchored by drummer Billy Hart's free jazz from the 1970s. "You stayed with it!," she exclaimed from the stage. "I was nervous, but you stayed with it." She recalls now that the audience did more than just stay with it: they actually enjoyed the edgy music, to her surprise and relief.

This year's festival opens on Friday June 1 with two generations of guitarists in a duo, Bill Frisell and Julian Lage. In quick succession, pianist Fred Hersch with his trio, and the Brazilian Trio Da Paz including clarinetist Anat Cohen and singer Claudia Villela, share a double bill on Saturday June 2. Charles Lloyd, who just celebrated his 80th birthday and has been a dedicated friend to Felix and the festival, brings his own friends including Zakir Hussain, Gerald Clayton, Eric Harland, and Frisell for an early evening show on Sunday June 3.

Sprinkled throughout the week are other shows in varied venues. Trombonist Adam Theis of Jazz Mafia brings his Cosa Nostra Strings for two shows over dinner at the hip cocktail-centric Spoonbar. Marc Cary, accompanist to singers from Abbey Lincoln and Betty Carter to Erykah Badu and Lauren Hill, twice chairs his own trio in an art gallery on the town's main street, with Victor Lewis again behind the drums. More than a half dozen free presentations pop up in restaurants, galleries, wineries, and the town plaza. Consistently each year there are introduced lesser-known Brazilian, Cuban, and other Latin musicians.

Why Healdsburg? Because Jessica Felix wanted to live there, after many years in Oakland across from San Francisco, where she had produced jazz showcases in her home and during a week each year when the jazz club Yoshi's took a mid-summer hiatus. She wondered if a region of wine tourism could be ground for the elegance and excitement of jazz. She began with pianist George Cables in a gourmet coffee house, and became encouraged to try more.

The first festival was a small affair, held one weekend in early June 1999 on three nights with different iterations of a close assemblage of musicians: vibraphonist Bobby Hutcherson's Quartet with Cedar Walton on piano, Tony Dumas on bass, and Billy Higgins on drums; Billy Higgins—solo; then reconfiguring the personnel as the Cedar Walton Quartet adding saxophonist Kathy Salem to the rhythm pairing of Dumas and Higgins who had played with Walton under Hutcherson's banner.

Billy Higgins was present again the following year 2000, with Charles Lloyd who appeared for the first time and with John Abercrombie. Lloyd, who is headlining this year in his sixth appearance at the festival, returned in 2004, then again in 2008; in 2011, the year he pledged to appear whenever and do whatever he could to assist Felix rebuild her organization; 2013, and now again this year.

The theme for this year's festival is "Friends Returning." Many of this year's musicians have played Healdsburg before, and look forward to getting back. Some are lodged in hotels, others in guest houses provided by sponsors and residents, arranged by Felix. It's a break from the discomforts touring may bring. Music during the festival is not limited to the performance stages. Healdsburg becomes the musicians' neighborhood. They walk into after-show venues, and continue to play. A surprising encounter with a musician in a hotel lobby yields the sound of surprise.

To a tourist looking to unwind, their ears may now become opened. The taste may be as unfamiliar to them as a wine they had sampled earlier that day. Some, to be sure, will escape to the quiet of their rooms. Others will remark, "I've never heard anything quite like this. It's quite good," adding, uncertainly, "isn't it?" Yes, it very likely is, and the work of Jessica Felix will have harvested a new friend for jazz, and for Healdsburg, California.

Journalist/Attorney/Skier/Surfer/Jazz Enthusiast Based in Northern California