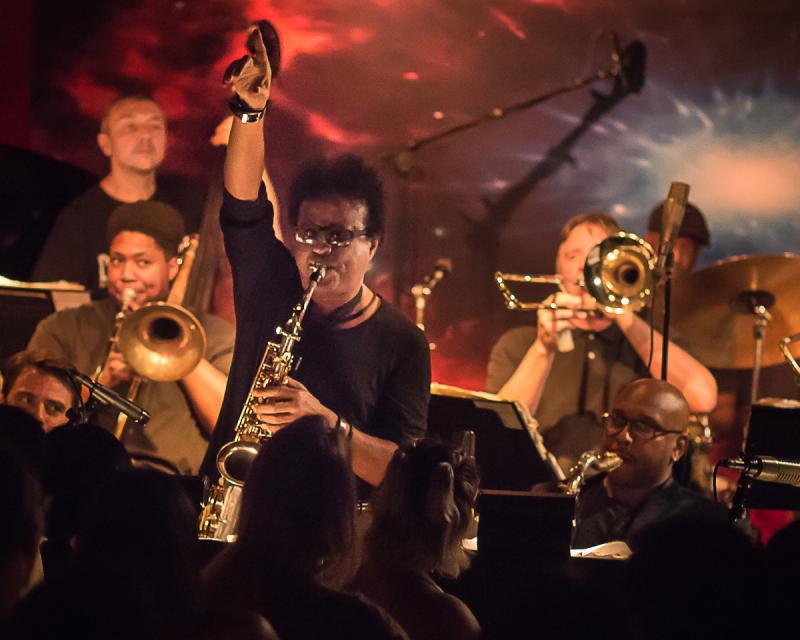 The Cookers are an all-star septet that takes its name from the classic Freddie Hubbard album, The Night Of The Cookers, a 1965 live effort from the master trumpeter who passed in 2008. A somewhat fluid lineup earlier in the group's seven year existence has solidified with trumpeters David Weiss and Eddie Henderson out front with Billy Harper on tenor and Donald Harrison on alto saxophone, anchored by the superb rhythm section of George Cables, piano, Cecil McBee, bass, and Billy Hart, drums.

It was my first time witnessing the Cookers in action, but in the time it took Hart's sensational drumming to smack me in the face (i.e., in no time at all), I came to see that the jazz writer who had called them "the greatest jazz super-band working" may have been onto something. And this is a smart super-band. Much more than a festival pick-up super-group (as great as festival pick-up super-groups can be), the Cookers are a working band with deadly serious chops and the ability to write, record and—as I witnessed this night—perform at a level that pushes the music forward. In performance, harmonized horns and reeds float above Hart and McBee's sonic pulse, Cables punctuating and filling; soloists step forward to trade off ideas, trumpets jacked up and urgent, saxophones deep and momentous.

As a unit, the Cookers encompass John Coltrane and Charles Mingus and other post-bop conceptualists and turn that mid-1960's freedom into a music that is fresh, modern, exciting, irresistible. The Cookers may be one of the benchmarks for contemporary jazz mastery, expressing the latest wave of an art form that always seems on alert for its next "new paradigm" to emerge. Maybe this is it? Wow.

Sitting at the Steinway grand like a Buddha who swings, Cyrus Chestnut completed a triumphant early set on his third and final night at SMOKE Jazz & Supper Club with a shout-out to his colleagues, Eric Wheeler on bass and Chris Beck on drums, and a big grin and wave to the packed house. He'd just torn the roof off the intimate club and left its patrons—who had turned out in numbers on this Sunday night—agog at his keyboard virtuosity.

Swinging seemingly with the greatest of ease, Chestnut's utter mastery at the piano can hit hard like McCoy Tyner, go mellow like Bill Evans, be playfully brilliant in the Art Tatum tradition, and go big in the Oscar Peterson mode—sometimes all within one sustained medley. But as much as he quotes and references some of the gods of the eighty-eights, Chestnut creates original music that is all at once brilliant, bluesy, and charismatic.

A showman in full control of enormous creative powers, Chestnut melds found styles and sounds and to re-invent such jazz "chestnuts" as Duke Jordan's "No Problem" and Charlie Parker's "Ornithology" as his very own. Everything the Cyrus Chestnut Trio plays can leave the listener breathless and feeling as if it's music being heard for the first time. As the pianist said from the bandstand, "We will not play these notes the same way ever again, so you will not hear them played the same way ever again."

If you love the purity of the jazz piano trio, you'll want to check out Cyrus Chestnut live—or check out the live album, Midnight Melodies (SMOKE Sessions Records) he recorded with Curtis Lundy on bass and Victor Lewis on drums.

Mingus lives! Yes, that's right: Charles Mingus may have died in 1979, but for the past 25 years, the musical legacy of the great and thoroughly original bassist-pianist-composer-bandleader has continued in numerous enterprises dedicated to keeping his brilliantly complex and unique compositions and arrangements very much alive. Among these efforts are the Mingus Orchestra, Mingus Dynasty and the Mingus Big Band; there's also a Mingus Institute, the Mingus Festival, an annual Charles Mingus High School Competition, recordings old and new, and global tours. All of it is managed and directed by Sue Mingus, a tiny dynamo with a singular passion to not just keep her late husband's legacy alive but also to spread his musical ideas to new audiences around the world.

Since 2008, the 14-piece Mingus Big Band has had a Monday night residency at Jazz Standard, a fine subterranean venue where we chatted with Sue one night before an early set. "The music inspires the musicians," she said. "And the musicians love the challenge of playing these intricate arrangements. Of course what may have seemed very complex 30 or 40 years ago is less so today, and the guys have fun playing it."

Complex but still rooted in blues, Mingus music is arranged for multiple instruments in swirling layers of sound that create an effect of sonic movement sometimes approaching madness—shouts, claps, drums, piano and bass, baritone, alto and tenor saxophones, trombones, the oompah of a tuba, all unleashed, wilder and crazier, 14 instruments simultaneous screaming for attention, verging on chaos before coming into more and less unified coherence. In Mingus music, the titanic whole will exceed the sum of the many interlocking, alternating, dark, bluesy, quirky, lighthearted parts.

Alto saxophonist Alex Foster is the only current member who played in the band while Mingus was alive, but the rest of the crew is well-schooled in the master's lore. Foster and bassist Boris Kozlov take the audience through stories about tunes in the band's repertoire; the rest of the scintillating group does its talking musically.

Some of the best featured solos this night included work by Philip Harper on trumpet, Conrad Herwig on trombone, and Helen Sung on piano, but all the players, alone and collectively, got lots of space to make instrumental statements: Tatum Greenblatt and Alex Sipiagin on trumpets; Alex Terrier, Abraham Burton, Brandon Wright and Ron Blake on saxophones; Chris Bates and Clark Gayton on trombones; with Donald Edwards on the drums.

From "So Long Eric," a tune written for Eric Dolphy, to "New York Sketchbook" and "Peggy's Blue Skylight," the music stretched the Mingus Big Band to its collective limits—at times the band sounded as if their instruments were about to explode; other times the tempo slowed, yielding surprising beauty in unexpected places. Affecting, mesmerizing, sublime Mingus music, still alive and well.