Duke Jordan was a pianist whose work with the saxophonist Charlie Parker endures in the jazz pantheon. Jordan was regarded as one of the great early bebop pianists, the sound that he helped to create in the postwar era was something new, and it remains a cornerstone of jazz. Irving Sydney Jordan was born in New York in 1922, and began his formal piano studies at the age of eight.He continued to study piano until he was 16, playing in the school band at Brooklyn Automotive High. After graduation in 1939 he joined the septet of trombonist Steve Pulliam. This combo, appearing in an amateur contest at the New York World's Fair that summer, won a prize and earned the attention of John Hammond, who was impressed by the teen-aged efforts of young Duke

All About Jazz is celebrating Duke Jordan's birthday today! Duke Jordan was a pianist whose work with the saxophonist Charlie Parker endures in the jazz pantheon. Jordan was regarded as one of the great early bebop pianists, the sound that he helped to create in the postwar era was something new, and it remains a cornerstone ...

Yesterday, I posted on pianist Duke Jordan's first trio leadership session, in 1954. Today, I want to share one of his finest albums, Flight to Jordan, his first and only Blue Note release. The album is solid for several reasons: the group is tight and in the groove; all of the tracks, except I Should Care, ... 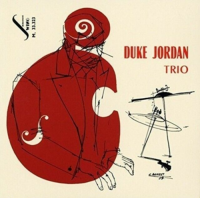 Pianist Duke Jordan has always been exceptional. At age 25, in 1947, he began playing and recording with the Charlie Parker Quintet, which included Miles Davis (tp), Tommy Potter (b) and Max Roach (d). As a bebop pianist, Jordan's genius was his ability to operate on three levels at once. He kept superb time on the ...

All About Jazz is celebrating Duke Jordan's birthday today! Duke Jordan was a pianist whose work with the saxophonist Charlie Parker endures in the jazz pantheon. Jordan was regarded as one of the great early bebop pianists, the sound that he helped to create in the postwar era was something new, and it remains a cornerstone ...