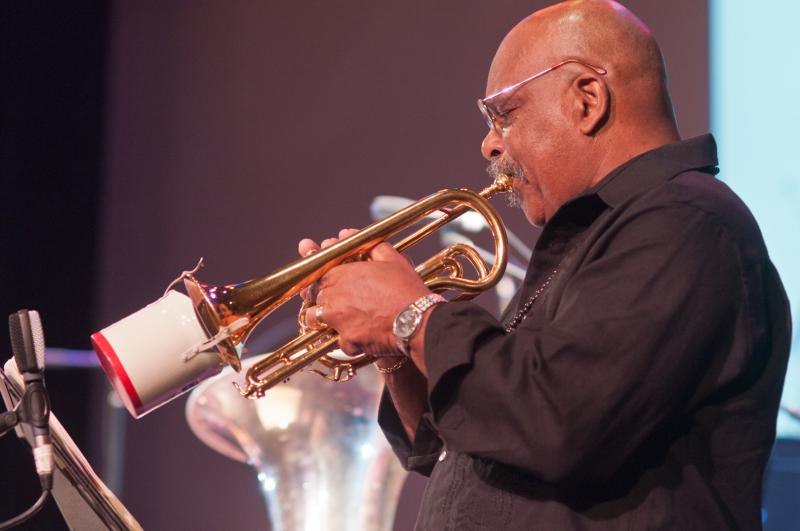 Tuesday night at lower Manhattan's Abrons Art Center saw the Festival of New Trumpet team up with the hosting Vision Fest for a night of great music from musicians of all ages, who are looking to take the horn of Dizzy Gillespie, Clifford Brown and Don Cherry in fresh directions. But rarely did past and present converge as strongly as in Ted Daniel's unique take on the New Orleans jazz of King Oliver's legendary Creole band. Playing cornet with a band including tubaist Howard Johnson, drummer Newman Taylor Baker, percussionist Orlando "Q" Rodriguez, and dapper violinist Charles Burnham, Daniel had a band that simultaneously dug into the tradition while stretching it out at the edges.

Daniel is one of the premier trumpet players to arise out of the late '70s/loft-era avant-garde, and he's played with great names like Henry Threadgill, Andrew Cyrille, and Sonny Sharrock. Yet, he has a strong handle on the old school vocabulary of New Orleans, which he showed to great effect throughout ripping dialogues with the extra expressive Burnham, who dipped and bobbed as he played like a fiddler at a wondrously funky hoedown.

"This is the avant-garde!" Daniel declared, after a down-home rendition of "Working Man's Blues. "In 1923, that's avant-garde. Still is, today." Between announcing tunes, Daniel gave the audience a history of this music, explaining that all the tunes came from the band's legendary recordings with a young Louis Armstrong ("in knickers"). He asked everyone to listen carefully to the form of each tune, and how it was divided into distinctive sections, remarking about how songs like "The Zulu's Ball" have "quite a bit of progress in them, like little miniature symphonies." And he also spoke about how King Oliver was revolutionary in his time, for modifying the sound of his cornet with a wide variety of homemade mutes, which he demonstrated despite admitting some discomfort with them.

"Zulu's Ball" opened with a brief solo statement from Burnham, before giving way to a juicy dialogue between violin and trumpet. The two of them had tremendous chemistry, and the unique timbres of their instruments often made it hard to tell one from the other as they talked. Burnham's violin has a distinctive groan and wail in it when he gets going, and his playing brings out some of the folk elements simmering just under the surface of music that's now the standard for the genre of New Orleans Jazz. And when Daniel pushed him a little with some catcalls from his horn, his violin really took off. 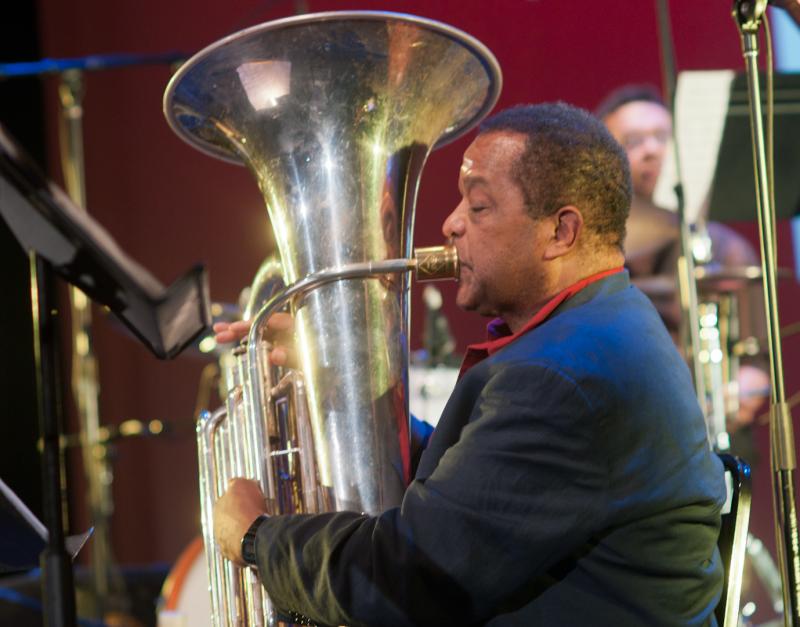 The great HoJo was also a force to behold, bringing his typical grace to the lumbering tuba, and even having a nice feature over "Tears." The pairing of drums and conga was also nice in this context, bringing out some of the Latin feel (Jelly Roll Morton's "Spanish tinge") deep inside the New Orleans march.

Of course, the music really got going when Daniel cut totally loose. His playing, while it certainly didn't quite fit the traditional chords of the song, had so much scintillating energy in its fiery runs and vocalizations that it made its own space among the singing rhythms of the drums. In the closing "Just Gone," his hard staccato attacks and sliding lines mixed fire into the old school funk of the night. And so his playing encapsulated the theme of the set—finding common ground in avant-gardes past to make a fresh present.

Any opportunity to hear Polish trumpeter Tomasz Stanko is special in its way. After gaining greater acclaim for his relatively brief but momentous stint with his countryman, the legendary pianist and film composer Krzysztof Komeda, Stańko has remained one of the most distinctive voices calling from the vast terrain of the European jazz scene for the past 30 years. So hearing Stańko is the opportunity to hear a great player but it's also the opportunity to hear something completely unexpected.

After recently moving to New York as a part-time resident, Stańko has been playing around more with local musicians, including a scorching quartet with pianist Craig Taborn, bassist Thomas Morgan, and drummer Jim Black. That quartet might reach as far out as just about any project that the trumpeter ever worked on—and this is a man who has played with such high-octane screamers as Peter Brötzmann—and that was also the band advertised in the promotional materials for the Festival of New Trumpet night at Vision Fest. So when a different lineup was announced, some evidently disappointed Taborn fans in the audience left almost immediately. Their mistake. 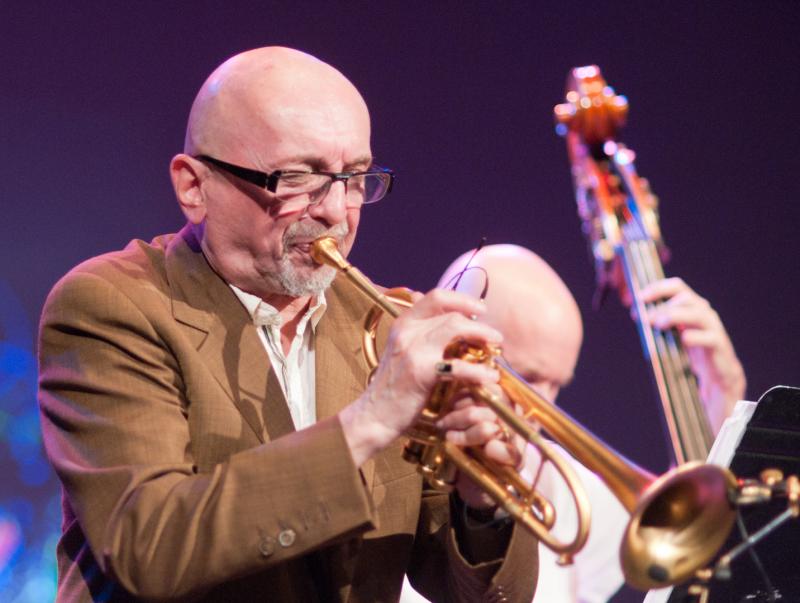 The new quartet that Stańko brought instead to the Abrons' stage featured bassist Mark Helias, violinist Mark Feldman, and pianist Sylvie Courvoisier. Each of these four players represents one of the more instantly recognizable voices on their respective instruments. Yet together, they created the kind of spontaneous live excitement of which festival-goers dream of being a part.

The band opened with a version of "Domino," off Stańko's great From the Green Hill (ECM, 2000). As the breathy trumpet intoned the theme in unison with the two strings, lush accents from the piano answered their voices. Then Stańko and Feldman engaged in the first of many amazing dialogues throughout the night. Between the warm, dark hues of Stańko's trumpet and the sound of Feldman's violin, as insistent as a switchblade, the two sounds were instantly complementary. The wails of the trumpet mixed with the plaintive cries of the extreme violin register for an all-too human effect that made hairs across the auditorium stand up. This in turn gave way to an even more electric exchange between the husband and wife team of Feldman and Courvoisier.

Early on then, something magical was going on. This quartet simply seemed to work as one, drawing fresh ideas from each other and delighting in the sounds the others make. They just worked: at one point, every member of the band was playing together with their eyes closed, following each other solely by listening. And the near-packed audience seemed to sense it too, filling up the warm auditorium with a roar of applause whenever the band stopped and allowed silence to fall.

While there were occasional breaks between songs, they often linked several ideas together, as on Stańko's "Amsterdam Ave Suite." Usually the band took the themes in unison, where Feldman's violin tone and Courvoisier's classically lyrical touch really brought out the cinematic quality lurking within many of the most romantic melodies. At the same time, there was no restraint in exploring the edges of tonality within a given song. The players seemed to delight in playing a beautiful melody, and then developing that lyricism into something sharp, energetic, and delightfully dissonant. Courvoisier in particular took a certain relish in yanking the tunes (and her piano) to their very edge.

Perhaps because she can play so beautifully when she wants to, it can be a great treat to see Courvoisier wreak havoc with the inside of the piano. The range of sounds she gets is fascinating. At a certain point admittedly, one has to feel for the owner/tuner, because it sounds like she's got to be doing some kind of damage to the inside of a delicate instrument. The percussive effects she wrings out of the prepared instrument are, frankly, astonishing—ranging from distorted bent notes to crawling string effects and clattering bangs. In her way, she sometimes played the drummer for the band by whipping up a chaotic thunderstorm that boomed and clattered under the Steinway's hood. Of course, she could just as easily unleash beautiful twinkling phrases, or intricate atonal clusters like flowing water in the midst of the band's ruminations.

Helias also showed not just great skill, but also his tremendous versatility, as he held down the bottom within a drum-less band without the slightest misstep. When everyone else went silent, his high-speed solos proved enchanting, and his grace with the bow further brought out the wide range of dynamic sounds within the band. Moving gracefully in all tempos, and often seeming to play two roles at once, he was the foundation from which the group stretch out.

One of the great moments of the concert came towards the end, as Stańko took sole possession of center stage for really the only time that night. But what was astonishing was, as the trumpeter played a warm melody with his darkly speaking horn, the bowed strings and dense piano effects created a remarkably full sonic wall around him, so that the listener could have been forgiven for thinking he was listening to a full orchestra, and not three musicians behind a trumpet soloist.

This was the tremendous flexibility of the band—in that it was simultaneously capable of so much. A single song could contain the brash dissonance of the avant-garde, the evocative feeling of Italian film music, the spacey quality of the European scene, the up-tempo bop of classic jazz, the dense beauty of classicism... This was a band with near unlimited potential. 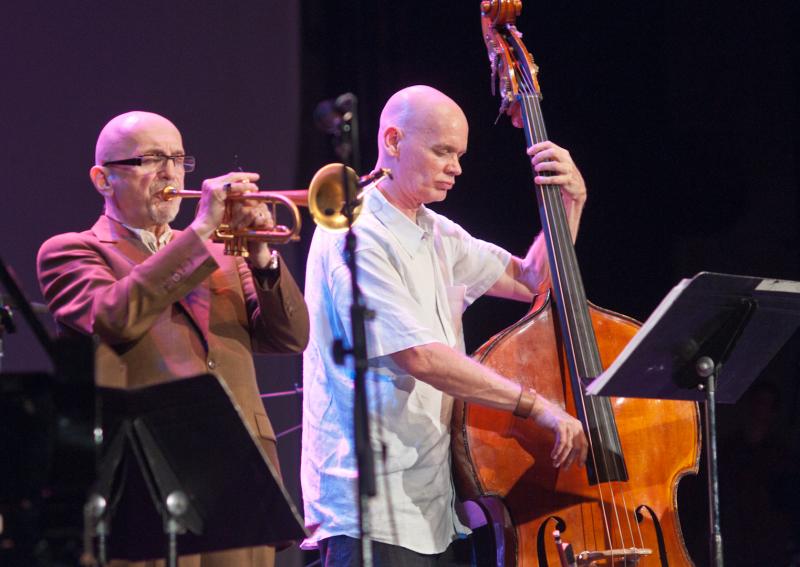 Stańko seemed to know it, too. All night long, he smiled and nodded as the other players stretched out across tunes that he has played many times with many different players. It all sounded new. And at one point, as all three New Yorkers soloed over one of his tunes while he stayed back, he looked positively ecstatic as they took the music in new and unrelentingly fresh directions. This quartet fit together into one of the showstoppers of Vision Fest. They were so unexpected, so fresh, and so good.

In the past, Stańko has been quoted as saying that he's never stopped playing the same song in all his years of playing. Indeed, regardless of style or time, so much of his music seems to be the pure, personal sound hidden somewhere within his breath. Even still, it's truly remarkable how new the same song can be, when complemented by likeminded masters who bring their own rich songs to play in unison.