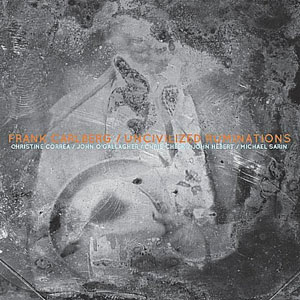 Pianist/composer Frank Carlberg continues to perfect his distinctive blend of poetry and left-of-center jazz. Carlberg does it together with a stellar cast of close collaborators; most important of them is vocalist Christine Correra, with whom he has been collaborating for two decades. Both have performed poetry by Wallace Stevens on Variations on a Summer Day (Fresh Sound New Talent, 2000); Jack Kerouac, Robert Creeley, and others on In the Land of Art State of the Union (Fresh Sound New Talent, 2006); and exclusively on Creeley with The American Dream (Red Piano, 2008).

On the masterful Uncivilized Ruminations, Carlberg returns to works by his fellow countrymen—Hollo and Kai Nieminen (translated by Hollo)—with one poem by novelist/poet Jim Gustafson. The poetry is characterized by a trenchant humor, a bit of absurdity, and bittersweet reflections on reality. Carlberg and Correa succeed in staging these short poems as brief and playful theatrical plays that clarify the poems' postures and insights into reality.

"Lunatics"—using text from an 1852 medical journal about the common causes of lunacy in males—features Correa's distinctive comic performance, which adds a contemporary political criticism to this shortlist of causes, and a propulsive rhythm section led by Carlberg, bassist John Hébert and drummer Michael Sarin. Hollo's "it was all about..." is an abbreviated flash-fiction, ironical retelling of the legend of Tristan and Isolde, performed as a Kurt Weill-esque swinging ballad, with a beautiful soprano sax solo by John O'Gallagher.

Nieminen's short poems "Old Age," "Posthumous Success," "Misanthrope" and "Don't Rush Me" are read like tongue-in-cheek haikus. All four, performed one after the other, enable the ensemble to highlight the comic, paradoxical insights through inventive interplay. Gustafson's "Perfect" is sharp satire on ego obsession, presented as a swinging song based on the tight rhythm section.

A remarkable and inspiring project.