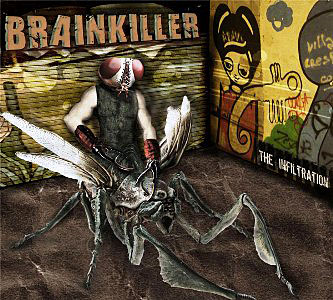 With a name like Brainkiller, it's easy to imagine a punk band thrashing the noise to a frenzied crowd of head-bangers. While the idea is not entirely a stretch in terms of The Inﬁltration's energy, there are clear differences: first, instead of the usual guitar or piano-led ensemble, there's an uncommon trio of trombone, keys, and drums; second, these seasoned musicians can deliver diversity, from avant-gardism and electronic exploitation to workings that are imaginative and progressive.

Brass man Brian Allen plays the 'bone with authority in the vein of veteran Roswell Rudd, with sonorities that range from growling roars to purring whispers. Equal support comes from Jacob Koller's wizardry with a plethora of sonics and the tactile beats from in-demand Mexico City-based drummer Hernan Hecht. It's a team effort, as each musician provides his skills to the process.

There's a certain unpredictable quirkiness that's exhibited in the trio's persona. "U Can't Stop Z Train" has a sinister espionage aura—biting horn vamps, undulating keyboards and spacey harmonies—whereas "Casketch" parties hard, with pumping drums and horn blasts like the Second Line at Mardi Gras. Even short snippets (under two minutes) like "Spider" and "Last Mask" are satisfying, as their themes materialize.

The fascinating "Gilberto's Fantastic Safari" takes the prize for creativity, illuminating the trio's penchant for the outer rim. It's trippy, with shades of surrealism, harmony, and Allen's horn mimicking an elephant's call. Follow it up with the abstract "Ice Fishing" and the bizarre but wondrous "Eepy" with its animated "toys in the attic" playfulness, and that's just scratching the surface. Intriguing and refreshing, Brainkiller is, thankfully, not your usual power trio.