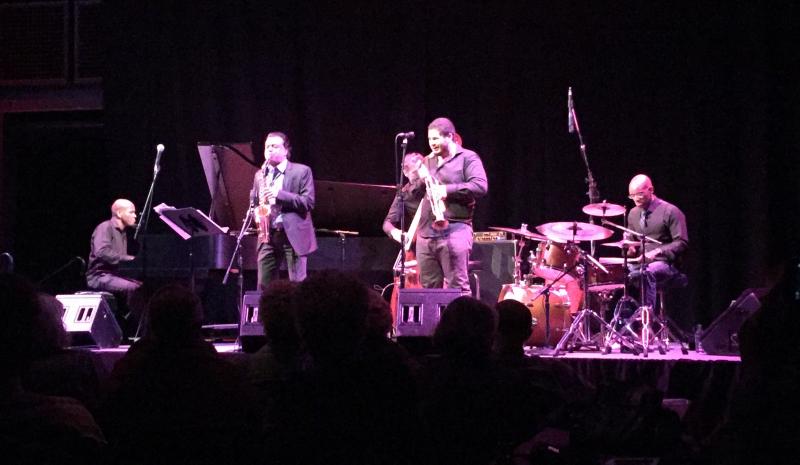 view slideshow
By MARK CORROTO
March 1, 2016
Sign in to view read count
Alto saxophonist Rudresh Mahanthappa brought his quintet to the Wexner Center at The Ohio State University February 27, 2016, to play his book of original compositions precipitated by the music of Charlie Parker. The audience to this sold out show was left with the proverbial question: which came first, the chicken or the egg?

Did they come to hear the music of alto saxophonist and originator of bebop, Charlie "Yardbird" Parker's music? Or, were they in the audience to experience the reigning king of the alto and 2015 critics' poll winner of composer, acoustic band of the year, and album of the year for his Bird Calls (ACT, 2015)? It has been sixty years since Parker passed away, and, frankly, a lot has changed in modern jazz music. Mahanthappa's band comprises a French bassist, Francois Moutin, a Californian pianist, Joshua White, a Texas-born Colorado-raised drummer, Rudy Royston and the 21 year old trumpeter Adam O'Farrill, grandson of the Afro-Cuban composer, arranger, and bandleader Chico O'Farrill. And, oh yeah, Mahanthappa is an Italian-born second generation American child born of Indian immigrants. No Dorothy, we aren't in Kansas anymore.

The music something a futuristic archeologist would create—reconstructing Parker's music based on a partial piece of sheet music, maybe a ragged corner or radio signal bounced back from Mars. A musical shamus might pick out the fragments of "Parker's Mood" from Mahanthappa's "Talin Is Thinking," but the point here is these latter-day jazz performers grew up on rock-and-roll, funk, punk, and hip-hop. As Mahanthappa joked, his young trumpeter thinks the 2015 film Star Wars: The Force Awakens was actually the first film. The saxophonist's opening solo on the piece whispers, hints, and mentions Parker, but it also draws from his Indian roots. When the band joins in, it is with an overwhelming force, playing as if to infer they were taking this town. And this night of music was indeed, theirs. Just as Charlie Parker often won cutting contests and bandstands, Mahanthappa's approach to playing is to always accelerate. Even on a ballad like "Sure Why Not," built on the shards of "Confirmation," his playing gains increasing momentum, except to pause for the expressive virtuoso bass solo from François Moutin.

The full force of this quintet was heard on "Chillin'" with the muscular drumming of Royston as a turbocharged engine supplying a certain leverage throughout. O'Farrill's trumpet often acts as a calming force, decelerating the melody to counter the tempest of Mahanthappa's saxophone. His playing often suggests that he is reconfiguring a Rubik's cube behind his back, making the difficult simple and the impossible probable. The trumpeter can spit notes like the late-1960s Miles Davis or deliver a classical music run with nonchalant and seemingly detached indifference.

The newest member of the band, pianist Joshua White, a replacement for the meteoric star Matt Mitchell soloed on "Maybe Later," turning his splinters of "Now's The Time" into a one-on-one dogfight with Royston. Their duet is best described as a McCoy Tyner, no better yet, Horace Tapscott-meets-Elvin Jones boxing match. Their feverish pace inspired O'Farrill and Moutin to also trade off. This music, like Parker's, is of its own time. Bird left Jay McShann's Kansas City and its territory bands for the urban sounds of New York morphing the DNA of swing into bebop. Likewise, Mahanthappa's evolution of Parker's coding is of its own multi-cultural time and place.