Maximize your visibility at All About Jazz by upgrading your musician page from standard to premium. With it, you'll receive All About Jazz home page exposure, a highly stylized / ad-free musician page with bonus features and benefits, an ad, plus you control where you sell your music and so much more.
Learn More
28

BY DAN MCCLENAGHAN
March 2, 2016
Sign in to view read count 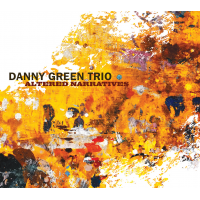 Pianist Danny Green took a big step up in the piano trio rankings with 2014's After The Calm (OA2 Records). The San Diego-based group focused in on a distinctive and beautiful set of Green originals and recorded them with a continuity of mood and an ebullient brio—like three guys who knew what they were doing in an art that demands nuance and delicacy sitting beside—in time's flow—a rise and fall of robustness of approach that just might evolve, when the music calls for it, the occasional joyful percussive zest.

With Altered Narratives, Green and company—bassist Justin Grinnell and drummer Julien Cantelm—show that they can go two-for-two in producing first-rate piano trio jazz, again on a set of tunes penned by pianist Green. The pianist's tune-smithing is slightly idiosyncratic with an anchor in the tradition. His melodies have a sense of wonder ("Serious Fun"), sometimes a sense of fun ("Benji's Song"), and the tongue might at times lodge in the cheek ("I Hate The Blues"), as he applies his supple-but-strong touch to the keyboard, accompanied by the bassist and drummer who may lean closer to the "accompanist" mode—as opposed to the democratic approach, while still injecting their individualistic sounds into the music.

The disc's opener, "Chatter From All Sides" is a slinky, cool dude strut. "The Merge" zooms along, edgy and frenetic, and "October Ballad" is an alluring reverie.

Then there's the leap that sets this apart from Green's previous recording: three tunes, in the middle of the eleven tune set, featuring the addition of a string quartet. There's nothing that adds a touch of elegance to a jazz set more than an adeptly-done string arrangement, and these are superb: violins, viola and cello in a sinuous, sometimes whispering embrace with a vibrant, top-notch piano trio, delving into Danny Green's distinguished compositions.