BY JERRY D'SOUZA
December 1, 2009
Sign in to view read count 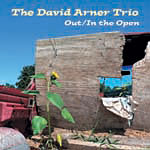 David Arner has built a reputation as an innovative pianist and a proponent of spontaneous composition. He filters both skills into his music and adds a healthy dose of surprise through changes in tempo, dynamics and harmony, weaving one into the other with facile dexterity. His ability to shape progression has led to associations with other creative forces like Tomas Ulrich, Dom Minasi, Susie Ibarra and Dominic Duval. He also has collaborated with his compatriots on this record, Michael Bisio (bass) and Jay Rosen (drums), both in concert and on the CD Porgy & Bess Act 1 (CIMP, 2009).

Bisio has had an intersting carrer, first playing classical music with the Seattle Symphony and the Northwest Chamber Orchestra before he found jazz in the 1980s. From then on, it was a journey filled with adventure into the unknown. Unafraid of risk, Bisio has been called to share the musical lore of Charles Gayle, John Tchicai, Joe McPhee and Diedre Murray, among others.

Inspired by Tony Williams to play the drums, Rosen became seriously involved with jazz after hearing Charlie Parker. A colorful drummer, he filters his innate sense of rhythm and time into the veins of a tune, giving it a pulsating presence.

Arner, Bisio and Rosen have an inherent immediacy. Reading each other perfectly, they develop ideas with cohesion and a committed passion. Four of the six selections—"Double Nature," "Swirl," "Mr. MB" and "A Take On It All"—are spontaneous improvisations, liberating each from the strictures of composition and opening the door to some arresting developments.

Bisio's scraggly bass is the take-off for "Double Nature." Arner and Rosen prowl, converse, interlock and bring in an introspective mood. The character of the track changes as Arner develops a melody of flowing sweetness that is countered by Bisio's arching bow. It is soon a riptide set up by the percussive hammer of the piano, the shimmer of the cymbals and the rolling of the bass. Ideas are fermented and brought to fruition at a furious pace. It is all brilliantly conceived and resolved.

Arner's "Intensities Opus 56" drives the adjective. The thrust is forceful, but it is not without an underlying emotion. Arner roils and rumbles, his two-handed approach balanced between attack and modulation. The tapestry is splashed by the shifting timbre of Bisio's arco and the percussive touches from Rosen before the final riot of color, as Arner lets the tempo surge and seethe.

"My Romance" is given a warm reading. The melody flows into the open arms of improvisation, rippling in the becoming presence of Arner's resplendent piano. It's a beautiful finale to an album that holds several magical moments.

Double Nature; Swirl; Mr. MB; Intensities Opus 56; A Take On It All; My Romance.