Bassist and composer Michael Bisio has appeared on more than one hundred recordings, including numerous appearances with Tomas Ulrich, Ivo Perelman, Joe McPhee, and a regular partnership with Matthew Shipp. More than a dozen of his albums feature the bassist as a leader or co-leader but only one, Travel Music (Self-produced, 2011) has been a solo ...

Throughout his long and prolific recording career, Ivo Perelman has recorded with a large number of free improvisation's leading lights. Pianist Matthew Shipp stands at the top of the pile, with over two dozen joint appearances; Joe Morris, Gerald Cleaver, Whit Dickey, William Parker, and many others help comprise the long list of associates he's maintained ...

5
Article: On and Off the Grid

Around 1985, I got a call from a close friend and my drummer at the time, Tony Lupo. Tony and I had been friends and playing together since 1963. At that time, we were both into Be-Bop and as we grew in age, our musical tastes and interest leaned towards outside playing. Of course, we never ...

In memory of Dominic Duval: 1945-2016. This article was first published in October 2010. Bassist Dominic Duval is a mystery to many—even to those interested in free music. Seemingly emerging out of nowhere in the mid-1990s, over the course of 15 years he has built a formidable discography, firmly establishing him as one of ...

By John Pietaro I was heartily saddened by the sudden unexpected phone call: downtown’s unsung hero of Free Jazz, Will Connell, Jr., was hospitalized and non-responsive. Immediately the jazz and new music community rallied and the outpouring of love for Will was apparent. We’d all been preparing for his big moment at the front of the ...

16
Article: On and Off the Grid

Free jazz versus free improvisation. Are they the same? I submit they are not. Let's take a look at what makes up music. I was taught from the very beginning that music is composed of three parts: 1. Melody; 2. Harmony; 3. Rhythm. Now add improvisation to the mix, and ... 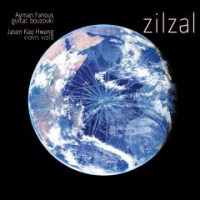 The duo release--Zilzal--further defines the evolution of two master musician/composers pursing the most imaginative alternatives to the status quo. In recent years, the inventive violinist/violist Jason Kao Hwang has been fully invested in exploring diverse compositional territories. His Burning Bridge octet is now firmly entrenched as a bellwether of genre-defying modern music with a distinct jazz ...