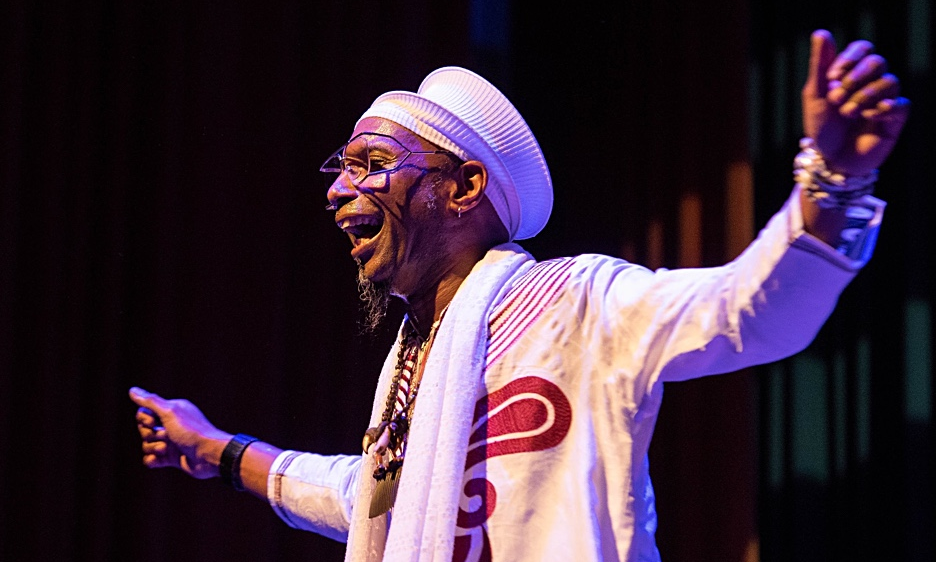 By DUNCAN HEINING
May 2, 2019
Sign in to view read count
Cuban-born pianist, Omar Sosa is a passionate man. Music, religion, family, his relationship to the planet—all these are inseparable to an artist whose musical world is steeped in the Afro-Cuban heritage that he draws upon so personally and individually in his work. Spinning culinary metaphors to describe the processes of music-making, he sings the praises of the musicians from so many different cultures with whom he collaborates. But most of all, he is passionate in his concern for the environment and deeply worried about the threats it faces from human activity.

Sosa, like many Afro-Cubans, practices the religion of Santeria. In a way, calling it a religion does scant justice to a belief system that connects the individual with nature, species, planet and cosmos and, within which, the worlds of spirit and matter intersect. In Santeria, elemental figures known as Orishas and the ancestors of each individual provide the bridge between those worlds. Music and religion, ritual and celebration, the sacred and profane connect in ways very different from our own Judeo-Christian traditions. Santeria is a way of being and living in the now, a religion of connections.

Aguas, Omar Sosa's most recent record, illustrates this perfectly. "Aguas" means "waters" and, on CD, the music is subtle, almost pastoral in feel, filled with the sense of free flow of its title. Live, however, it can just as easily boil and bubble whipped to near-frenzy by the trio of Omar Sosa, violinist/singer Yilian Canizares and Venezuelan percussionist Gustavo Ovalles. At last November's London Jazz Festival, spurred on by Caňizares' amazing dancing, the trio gave one of the most stunning performances I have ever seen. Just writing about it brings on an attack of goose bumps!

Born in Camagűey, Cuba in 1965, Sosa moved first to Ecuador in the early nineties and then to the Bay Area, San Francisco in 1995. Now based in Barcelona with his young family, we spoke on the phone earlier this year. With thirty plus records to his name, I began by asking how come each CD he releases seems so different, so unique.

So, what was the moment in his life that was Aguas?

"It was a moment where I was thinking about a few things," he says. "The world today, for whatever reason, it's kind of crazy. It's kind of on fire but it's not a peaceful fire. The fire these days can burn people, can burn humanity, can burn the soul of people. But Aguas is one of the important elements. We face a lot of problems with water on the planet and people don't even think about this. Why? Because we spend time worrying about social media but not the fundamental things. How we going to feed ourselves in a healthy way? Clean water is fundamental. Everything needs water. We are born out of water. We don't really put our attention to this. With this project and the project before, Transparent Water (2013) with Seckou Keita and musicians from China, Japan, Venezuela, it was the same philosophy."

And, as he describes it, it's a philosophy bound up with Santeria.

"We pay tribute to our tradition because in Santeria we have a different religion, different gods, who represent the elements. Oshun represents the river and the clean water that we drink and Yemayá represents the sea that surrounds us and the entire planet. We pay tribute to our Orishas and to Mother Nature, to thank them in the best way we can, which is to make music and, at the same time, we try to tell people, 'Hey, guys! Water is going to be the most expensive thing in ten or fifteen years. It's not going to be Brexit or independence for Catalan. It's not going to be Donald Trump with his crazy ideas. It's going to be water, man.' And with climate change, a lot of places will go under and one of them is going to be London. New York is going to go out. So guys, let's pay attention to Mother Nature and being true with the elements."

"Well, it's listening to traditions, learned traditions," Sosa says. "Respect each other and think how we can translate water through music. It's partly through space and silence and having the perspective of seeing the transparency between every note in every passage, between every phrase. In everything we play, every single song we present in our concert is based in a traditional rhythm that has come from the Santeria, from our traditional African roots in Cuba. For example, when we play "Oshun," we play the rhythm that we play in a ceremony to Oshun. The god comes to the Earth through the dancer. She expresses the Orisha in her voice and through her human body."

And Sosa continues, "Maybe for you that is a little strange but in the animist tradition in Cuba and Brazil, in Africa and Morocco, you can call the spirit, you can call your ancestor and your ancestor can come to the physical body and say something and represent what they are. When we play, the rhythm we use is the traditional rhythm that we use in our ceremonies. This is how we try to represent water through music."

Put as simply as my limited understanding will allow, the Orisha expresses both the idea and thing itself, in turn embodied through the voice and body of the dancer(s) and through the music and rhythms associated with the ceremony and tribute to Oshun or Yemayá. On CD, one gets a powerful sense of this through the music of Aguas or Transparent Water. One knows instinctively that one hears something that taps into other worlds of thought and belief. But on stage, that same sense is heightened and rendered palpable. Sosa explains further.

"Music can represent the elements because every single animist religion on this planet is connected with the elements—fire, earth, water, trees, sky, moon. Another thing is that we start our concert with a prayer. We give three minutes to prayer and name the ancestors to let them know we are here as material human beings to say through our voice what we think is right for humanity and to make a consensus and help everybody to live in a peaceful, unique and lovely way. We could be an hour but of course we cannot do the concert only to do the prayer. (laughing) We start with ach é which means 'blessing.'"

I ask Sosa if the importance of representing this spiritual aspect might be one of the differences between Afro-Cuban music and jazz.

"You know I don't see a difference," he says. "I see a point of view. The spirituality of Afro-Cuban music and the spirituality of jazz come together because jazz in philosophy is not only a style of music. In this philosophy, jazz means to me freedom. In this philosophy, if you learn the tradition and the spirituality and the philosophical way of each tradition, you can combine all the traditions and all the cultures. Thelonious Monk, who is one of my heroes, said, 'Jazz is freedom.' When I read this in a book, I say, finally, I find something that I can put all that I have in my mind together but could not name because somebody already name it."

It's important to appreciate that Sosa's music draws upon jazz, on classical music—he studied classical music in Havana -on his Afro-Cuban roots and on other vernacular musics with which he connects on emotional, spiritual and musical levels. The word 'jazz' is as good a descriptor as any, so long as one understands jazz more as a way of making music rather than as a genre. Or as Sosa puts it,

"I do not need to name the music I do because I just translate a message. If you want to name it, is the word 'jazz'? Well, why not? But I call it music from the Earth because it's music from our planet. It is not from Mars or Venus. So, through jazz I have the opportunity to have a backbone where I can put all the bones later and I can stand and walk with dignity and happiness and good times."

The Barbican performance was stunning, dynamic and an intriguing contrast with the gentler feel on record. I asked Sosa why the trio adopt a different approach on stage.

"It is simple," he says. "When you follow a river for a little bit, you see one moment of the river is quiet, you can sit down by it, dangle your feet. But in another part of the river, the river can kill you. For me, I am at a point in my life, where I don't want to hear a record to bring me to a nervous feeling because some music has the power to put you in a certain state of mind. Yilian and I agreed, with Aguas, we decided from the beginning to create a contemplative record. This is not a record that will make you say things like, 'This phrase is killer, man! This solo is...." This is not a solo record. This is a record that tries to represent something."

For the live show, the trio wanted to create a performance that would both represent the record but be dynamic, recognising that when people pay money for a concert, they want to hear the music but also see a show. At the same time, there is no loss of focus. Live or on record, the music must still have the capacity to express both the solemnity and introspection that its subject would warrant. Solemn, yes—but not gloomy or doom-laden. As Sosa says, "We want to present moments that intrigue people so they say, 'Wow! What are these guys talking about?' But not in a dark state of mind. We need present hope because our mission as artists is to give hope to the people and let the people know something they haven't thought of, that they didn't even see because they have too many problems every day."

Aguas, though it draws on other Latin American musics and on Afro-Cuba's roots in Africa, is quite distinctly a celebration of Afro-Cuba. At its heart lies the divine voice and nostalgic, romantic violin of Yilian Caňizares. Piano and synthesizer punctuate and provide melodic variation over the shifting rhythms provided on the record by Inor Sotolongo. One impression left by Aguas is of a strong influence of impressionist composers Ravel and Debussy, as much as of jazz—a reference to Sosa's classical training, no doubt.