Matt Slocum is a promising young drummer/composer who appears to be going places in jazz. A graduate of the prestigious Thornton School Of Music at USC, where he studied with Peter Erskine, (Weather Report, Stan Kenton), and Alan Pasqua, he has already performed with none other than Wynton Marsalis. Slocum resides in New Jersey and is working in New York, but is currently on the West Coast touring in support of his first album as a leader, Portraits, (Chandra. 2010).

Slocum's appearance at the Saville Theater generated a lot of word of mouth "buzz" in the San Diego jazz community. This was evidenced by the unusual turn-out of a fair number of top local musicians, like bassist Rob Thorsen and local drum maestro Duncan Moore, two of the areas most busy players.

Slocum's credentials were further served by the West Coast trio he was able to assemble for this tour: Grammy winning pianist Bill Cunliffe who has played with trumpeter Freddie Hubbard and tenor icon Joe Henderson among many others; his choice for the double-bass chair was no less inspired—Darek Oles, who's got Pat Metheny and Charles Lloyd in his thick resume. 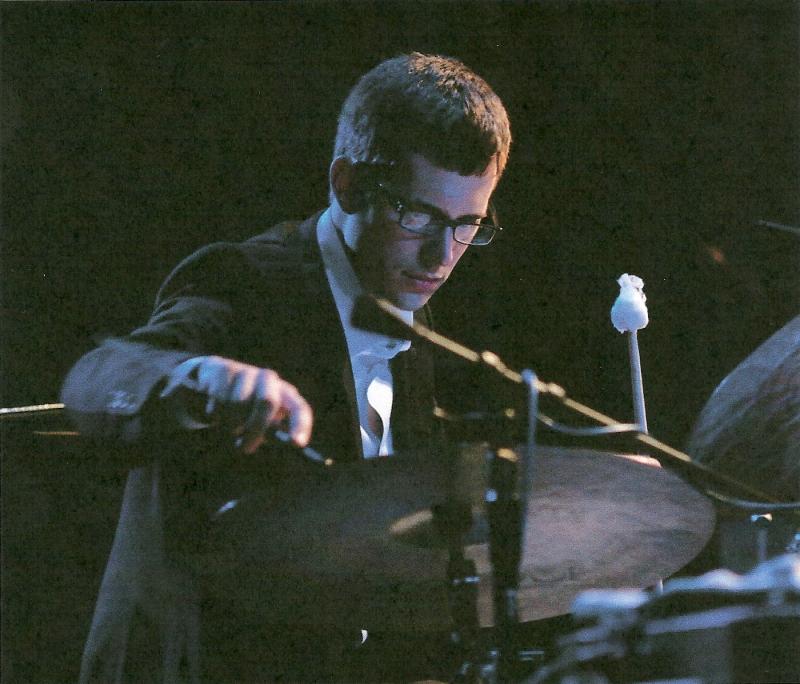 Slocum considers himself a composer as much as a percussionist and has a reputation as a "musical" drummer, rather than a "basher." As a composer, Slocum seems to have aligned himself principally in the mid-sixties Miles Davis camp. Many of his tunes have a vaguely Wayne Shorter kind of feel to them—that's hardly a complaint.

The concert began with a loose, swinging take on the Ornette Coleman blues, "Turnaround" which was delightful. Featuring compact, soulful statements from Cunliffe and Oles, it was the perfect place to start. The trio then launched into "Portraits" which had a mysterious vibe courtesy of a dark unison bass ostinato. Next was another Slocum original, "Avenida Del Paradiso" which featured a lilting six-eight Latin groove, that seemed to infuse Cunliffe with the spirit of Herbie Hancock, say from his Blue Note period. This piece also showcased Oles' ability to solo in his deep, "tone-first" style. Oles has relatively small hands and it was instructive to watch him navigate the additional string-length of his hundred year old German full-size bass. Primarily self-taught, he has worked out an entirely unique set of fingerings for himself, maximizing the use of open strings and a certain degree of magic, because he played a whole lot of bass without moving his hands much.

It should be mentioned at this point that Slocum thus far hadn't "turned the heat up " much in terms of dynamics. He did as the tune reached it's close and it was a relief to hear him finally dominate the mix. When he chooses to be, Slocum is fiery drummer with a swinging bag of tricks. He then announced a ballad named for his long time girlfriend titled, "For Alin." This piece, like many that evening, would fit nicely on an ECM record. It was mostly rubato with Slocum creating a "quiet storm" with the use of soft-mallets all over his tiny Remo drum kit. "For Alin" even ventured into a brief "free" dialogue for a few minutes, before re-focusing on the melody to take the tune out.

Perhaps the most interesting piece of the evening, (certainly the piece with the most percussive drama) was a brand new—as yet untitled composition that alternated between meters of six and seven. This one inspired an absolutely joyous, constantly inventive piano solo, and when it subsided, Darek Oles had the spot light for an unaccompanied bass turn that was spellbinding in it's originality. Oles' sound is massive. When he first arrived in this country, he studied at Cal Arts with the legendary Charlie Haden and it shows. Like Haden, he draws you into his own world. Once you're there—he mesmerizes you with his pure, resonant sound. Following the Oles solo, the entire trio locked into a highly rhythmic dialogue in which Slocum's drums once again came to the fore. This time he stretched out with a constant stream of "snap-crackle-pops" from all over his drum kit, Slocum has done his drum homework—his exposition on this tune referenced some of his favorite percussionists: Max Roach, snippets of Jack DeJohnette and the occasional tom-tom expressions of Ed Blackwell.

The trio was now locked in a highly creative "groove" and the rest of the concert seemed to rush by. In rapid succession, they played tribute to Monk with a swinging take on "Eronel," performed a somber, mysterious version of the Darek Oles original, "That Night" and furthered the leader's aesthetic with his own, "Cambria."

They then "chilled" the audience out with the airy waltz groove of "After The Storm" featuring a round of inspired solos, then, as the concert drew to it's close, another welcome foray into high energy territory with Slocum's own "Catalyst." This one again brought the drums to the forefront as Slocum unleashed a torrent of polyrhythmic ideas that kicked the trio into high gear. All in all, a fascinating glimpse of a young drum force in the making.