Jazz pianist, composer and Grammy Award-winning arranger Bill Cunliffe is known for his innovative and swinging recordings and compositions. Bill began his career as pianist and arranger with the Buddy Rich Big Band and worked with Frank Sinatra, Joe Henderson, Freddie Hubbard, Benny Golson and James Moody. He has since established himself as a solo artist and bandleader, with more than a dozen albums under his name. Bill currently plays with his trio; his big band; his Latin band, Imaginación; and his classical-jazz ensemble, Trimotif. He performs in the U.S. and around the world as a leader and sideman as well as a soloist with symphony orchestras. His latest recording is the Bill Cunliffe Trio album “River Edge, New Jersey,” with bassist Martin Wind and drummer Tim Horner, released in April by Azica Records. Other recent releases include his Overture, Waltz and Rondo for jazz piano, trumpet and orchestra (BCM+D Records, 2012)

The term “all-star" is not one to be used lightly. Be that as it may, the appellation fits guitarist Doug MacDonald's Los Angeles-based octet as snugly as a glove; he and his colleagues are among the finest, most experienced and in-demand musicians on the West Coast. On Overtones, recorded in September 2021, the ensemble shows its ...

The multi-talented jazz singer and Broadway actress Melissa Errico begins the 767th Episode of Neon Jazz with a song off her 2022 release Out of the Dark; The Film Noir Project. From there, we glide into Gene Krupa and hear a host of new songs from artists that keep making 2022 a tasty year of jazz ...

Some of you may well remember Arthur Conley's 1967 chart-topper, “Sweet Soul Music." The lyrics began with the imperishable line, “Do you like good music?" That may resonate with listeners of a certain age, because Overtones: Doug MacDonald and the L.A. All Star Octet certainly qualifies as “good music." What is it about West Coast stuff ... 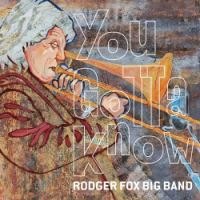 As trombonist Rodger Fox's superb New Zealand-based big band thunders toward its golden anniversary in 2023, the recordings keep coming. Here are two more, the first (Live) taped in October 2020 during what must have been a much longer concert at the Bruce Mason Centre in Auckland; the second, You Gotta Know, recorded that same year ...