BY DAN MCCLENAGHAN
August 27, 2010
Sign in to view read count 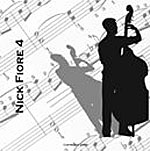 Bassist Nick Fiore started his professional music life in Philadelphia back in 1949, then moved to Detroit in '52, where he spent a half a century playing the Motor City Jazz scene, including a three-year stint at the Rooster Tail Night Club, with The Johnny Trudell Band, backing up stars like Tony Bennett, Steve Allen, Dionne Warwick and Wayne Newton.

Fiore also spent years working with his own piano/bass/drums trios. After a long and vibrant career, the bassist—in his eighth decade now—is releasing his first CD under his own name, Nick Fiore 4. It is a highly-polished set of engaging sounds—a cool flow of upbeat mainstreamers, bossas, and sambas, with an emphasis on gorgeous melodies and stellar musicianship.

The set of all-Fiore originals features several tunes dedicated to the bassist's family. "Nicky's Samba" is an energetic Brazilian-tinged nod to his son; a trio effort, with San Diego's Rick James giving off an ebullient piano vibe, born of a succinct touch and musical gregariousness that sets the tone for the set. On "Sandy's Bossa," for Fiore's beloved wife of 49 years, alto saxophonist Howie Segurson joins the trio. There is a richness and depth of emotion here, with Segurson's alto giving off a ringing, reverent quality befitting a man's loving tribute to his wife.

Fiore offers up a piano trio tune, "Song for Stacia," for his daughter—a gentle, tender melody, touched by a hint of the wistful. "Stan's Waltz" pays tribute to Fiore's brother, with Segurson blowing in a robust mode in front of drummer Kirk Hoffman's bump-and-shuffle rhythm.

On "Carole's Theme," for Fiore's sister-in-law, Segurson switches to flute and Hoffman adds a Latin vibe for smooth-flowing elegance. "Camille," for Fiore's daughter-in-law, is another flute vehicle for Segurson, as cool, beautiful and laid back as a tune can be.

Fiore has added a few more tunes to the tributes, the highlight being "Groovin'@ Beumont's," in remembrance of the bassist's gigs at the Bird Rock, La Jolla nightspot where he backed San Diego-based saxophonist/vocalist Joe Marillo. It's sparkling tune, featuring Segurson's stinging alto, hinting at the good times and good music in the seaside nightclub.

Nick Fiore 4 proves itself a marvelous introduction to a veteran musician—a classic set full of lovely and compelling tunes.