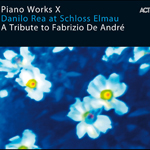 Danilo Rea is one of Italy's finest jazz pianists—a beautifully lyrical player with a precise and delicate touch. On A Tribute To Fabrizio De André, he creates his own memorial to the work of his fellow Italian, the singer and songwriter who died in 1999 at just 58 years of age.

De André was an extremely popular and, at times, controversial figure in Italy. Although his work was mainly rooted in a contemporary folk idiom, De André often performed with large groups, and also recorded with Italian progressive rockers Premiata Forneria Marconi (PFM). De André's lyrics, and a vocal style, reminiscent of Belgium's Jacques Brel or England's Jake Thackray, created a tremendous sense of narrative in his songs. Rea only has the music to work with, but his interpretations are beautifully observed and communicate the emotions and images of De André's stories.

"Bocca de Rosa," which opens the album, has a distinctly classical feel both in its melody and in Rea's performance. However, it is Rea's jazz sensibility that dominates, as exemplified on his version of De André's "Il Pescatore," with its freewheeling twists and turns that weave in and out of the melody line, and on "Carlo Martello," which moves from the original melody into funky and percussive passages with a free, improvisational feel. "Girotondo" opens with a short and simple folk-style introduction, before Rea takes it into more complex, fractured, jazz territory.

Both of Rea's own compositions are impressive. "Oona" is an exquisitely melodic ballad which segues into Joaquin Rodrigo Vidre's "Caro Amore." "Highlands" is a more somber and contemplative piece that evokes the space and loneliness hinted at in its title.

The sound quality on A Tribute To Fabrizio De André, recorded at Schloss Elmau in Germany, is superb. Every note Rea plays is crystal clear and resonant. Rea's performance combines technical excellence and a strong emotional connection with the tunes and demonstrates the strength of his own compositions, as well as De André's. A Tribute To Fabrizio De André is a memorable recording and one of the finest solo piano albums to grace the jazz world for some time.