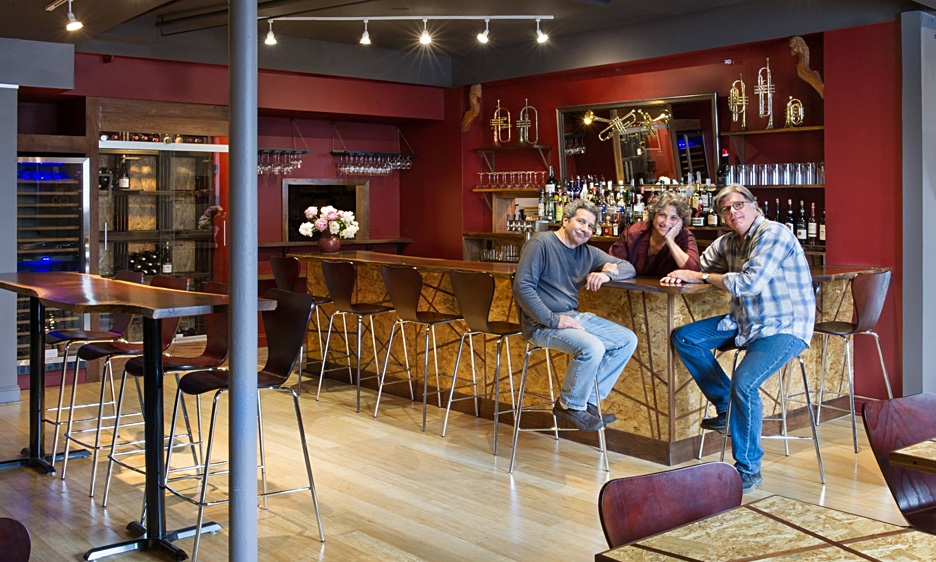 Mark Morganelli has long been known as a fine trumpet player and a promoter with years of experience in the New York City area dating back to a jazz loft 39 years ago, through booking at the Village Gate, Birdland, morphing into his nonprofit Jazz Forum Arts organization known for the summer concert series he has produced for many years. He's produced at Avery Fisher, the Beacon, Town Hall and many other theaters around the New York metro area.

In 2017 he added the title of club owner to his resume. That journey stemmed from the desire he and his wife, Ellen Prior, had to downsize their home in Dobbs Ferry, north of the Big Apple,

The Jazz Forum club opened at 1 Dixon Lane, Tarrytown, NY, (Westchester County) in June of last year with the Roy Hargrove Quintet. The lineup of groups has been first-rate and the price for patrons to enter, listen to great music, have a bite of food and some libation, is reasonable.

"It was wonderful," says Morganelli about that first weekend. "It sold out every set. Amazing."

The weekend had to be exciting for the couple. It also signaled some relief. The effort to open their doors took 25 months—permits, licenses, approvals, renovations—" Or as my wife Ellen likes to say: a gestation period of 800 days."

The club has had stellar groups perform—two sets on Friday and two on Saturday—in the months that ensued. Brazilian music is also a staple and the room also attracts emerging talents. Joey DeFrancesco and John Pizzarelli are slated for March. Morganelli said musicians from Wynton Marsalis to David Sanborn have expressed interest.

Morganelli never stopped as a presenter and performer. But a few years back, with their two children growing up, he and his wife decided they didn't need a large house on the Hudson River with its attendant maintenance and high taxes. "Every time Jazz Forum Arts would lose money, we would re-mortgage the house to save the non-profit. So we wound up having a lot of debt. We started looking to downsize."

They looked in Tarrytown, where he was already promoted jazz at the Music Hall, a long-running series that had covered 22 years and about 150 concerts. They weren't finding a new property that touched them, and he decided to check out an obscure commercial real estate listing in Tarrytown's downtown.

"I walk into this place, a 1910 building, a former bakery. It was being used for 10 years to wholesale and warehouse antiques. It was packed with beautiful antiques. Concrete floor. Bare white walls and some track lights on the ceiling. Other than that—a raw space. Upstairs was an apartment. We made the deal," says Morganelli.

Their house wasn't yet sold, but oddly enough a small newspaper in the area had decided to feature their property, including several photographs. The house sold in seven weeks. "We were able to wipe out the deficit, take some of the money from that and get a small commercial mortgage and we were in business," he says.

"It's going great. We sold out almost every set of Monty Alexander, John Patitucci, Joe Lovano, Bill Charlap and Paquito D'Rivera. Ann Hampton Calloway was 90 percent sold out for New Year's Eve weekend. The weekend after New Years we figured it would be dead, very quiet. But Russell Malone sold out two shows on Saturday. With minus-20 degree temperatures with the wind chill factor. Then Joe Locke did very well... We're very, very pleased with the support of the community here."

One thing that helped was Prior who spearheaded a fund drive in the community that netted $130,000. (They expected about $30,000). Also, they have a corporate donor, Montefiore Health System, which pledged $105,000 over three years.

"The model is working because we are supported by the community and because we are running it as a program of our non-profit [Jazz Forum Arts]. We have this cushion of funding that allows us to take chances on new groups. I'm doing things other clubs cannot necessarily afford to do. It's been working," says Morganelli. "I'm not just reliant on cover charges and food and beverage revenues. We have that 'soft money' that's coming in that helps us do the programming that we'd like to do and keeps the cover charges down."

Original plans called for a winter shutdown. But that has changed.

Says Morganelli, "We just got approved to remain open year-round. Originally, we offered to close voluntarily in January and February. Being on a private lane, we were worried about the snow. It turns out that it's no big deal. The plow comes through. We put out salt. The jazz aficionados come regardless. We're now open year-round."

In March, a Sunday evening set will be added for "artists that I want to present, but don't necessarily want to put on the weekend for four sets on Friday and Saturday. The first one of those will be March 11. Akira Tana, the drummer, and his group Otonowa."

Friday and Saturday sets are at 7 p.m. and 9:30 p.m. Sunday afternoons are Brazilian Music Sundays, with sets at 4 p.m. and 6 p.m. Meanwhile, Jazz Forum Arts will still have its 34 free summer concerts.

It was about 1979 when Morganelli opened a loft at 50 Cooper Square in New York as the Jazz Forum. "I opened to the public with the Jamaican-born trumpeter Dizzy Reece. The next weekend, Clifford Jordan and his quartet. The third weekend was my band. Slightly thereafter I welcomed Kenny Barron and Roy Haynes, Louis Hayes, Jimmy Cobb, Barry Harris ... Three or four months in I started my two piano, bass and drum concerts with Tommy Flanagan and Barry Harris. Not to far after that, my neighbor Art Blakey wound up playing there. Wynton and Branford Marsalis, who were also my neighbors, played there. There were so many people that came in and out. I'd have an open weekend and would call Philly Joe Jones. He'd throw his drums in his truck and drive up from Philly and play with his quartet. It was a whole different era. Now everything is contracts and 20-page riders."

Morganelli went dark for a night, but resurfaced at the Village Gate with Art D'Lugoff. He presented there for three or four months. There were other shows he put on in the East Village and other venues. They didn't make a lot of money and he took a break. It was during that time he met his wife—a duet for life. She is the general manager of Jazz Forum Arts.

As a trumpet player, he has remained active, playing music in Tarrytown and other spots. He recently played a series of dates in Italy, with Italian musicians, invited by pianist Massimo Farao. Farao will play in Tarrytown in April with Philip Harper and Jimmy Cobb.

He also frequently plays in his club with the Brazilian musicians and is planning a double-live CD of that music as his next recording. It will include folks like Nilson Matta on bass, and Helio Alves on piano.

Morganelli took trumpet lessons in elementary school, played in high school jazz bands and even got some gigs outside of school. He pursued music at Bucknell University in Lewisburg, Pa., and got immersed in the Bucknell Jazz and Rock Ensemble. Showing his business acumen even back then, at the school. One recording was Live at Montreux and Wolf Trap, from a gig the 20-year-old procured for the band.

He had listened to a lot of jazz in high school and began seeing live shows. Morganelli's first influences were Doc Severinsen and Al Hirt and Herb Alpert. That segued into Dizzy Gillespie and Miles Davis and, over time, explorations of Lee Morgan, Blue Mitchell, Freddie Hubbard, Clifford Brown and many more.

After college, he formed bands that played all over the city, while promoting shows. More often than not, his groups included some of the greats currently living there at the time, like Cobb on drums, Walter Booker, Junior Cook and others. His playing career grew and his producer and promoter credits did as well. Now he's running a club and hoping—as many are—that his success continues.

Speaking from his office on Dixon Lane, from which he can still see the Hudson River—though without as grandiose a view as his Dobbs Ferry home—he says, "It feels good."