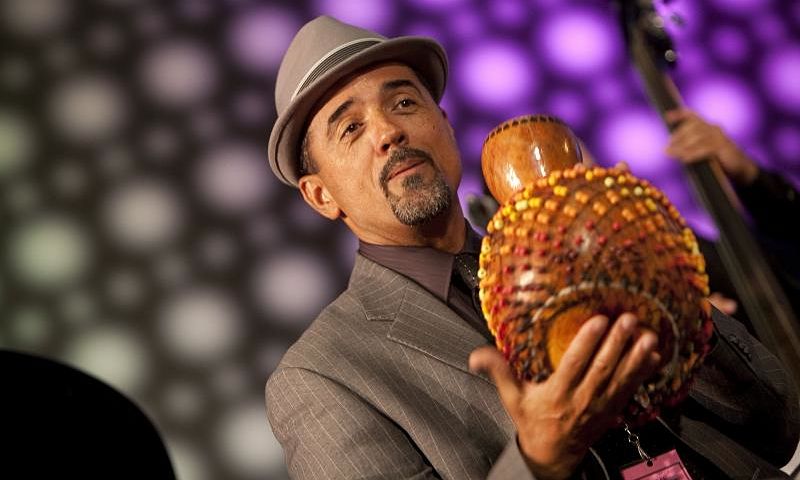 BY STEVE BRYANT
August 26, 2013
Sign in to view read count
In a career spanning almost 40 years, percussionist John Santos has gained world-wide renown and acclaim as one of the great composers and bandleaders in the Afro-Cuban jazz idiom. The four-time Grammy nominee is one of the foremost proponents of Afro-Latin music in the world today, known for his innovative use of its traditional musical forms and instruments. Santos has performed, recorded and studied with acknowledged Afro-Latin and Jazz masters such as Israel "Cachao" Lopez,Dizzy Gillespie, Tito Puente, Bebo Valdes, Armando Peraza, Eddie Palmieri, Carlos "Patato" Valdes, Francisco Aguabella, Max Roach, Steve Turre and Alfredo "Chocolate" Armenteros.

Born in San Francisco to Cape Verdean and Puerto Rican parents, Santos was exposed to a fertile musical environment which shaped his career in a unique way. As director of Orquesta Tipica Cienfuego and the award-winning Orquesta Batachanga, he was of the pioneers of salsa to the San Francisco Bay Area. As leader of the seminal jazz group Machete Ensemble, Santos was also instrumental in bringing traditional Afro-Cuban and other Latin American music to the area. Santos is also respected as one of the top writers, teachers and historians in the field, having conducted numerous lectures, workshops and clinics in the Americas and Europe, as well as writing about the music for numerous publications.

Santos also has a prolific career as a distinguished and creative multi-percussionist and recording artist, mainly with Machete Ensemble. His diverse credits also include working with Israel "Cachao" Lopez, Tito Puente, Bobby Hutcherson, the Cuban band Grupo Mezcla, Lalo Schifrin, Irakere, Santana, Cal Tjader, Danilo Pérez, Ignacio Berroa, Omar Sosa and Jon Jang. In 2006, after a 20-year run, Santos disbanded the Machete Ensemble and is now playing with a jazz sextet which. comprised of some of his old comrades from that group, has released Filosofia Caribena, Vol.1 (2011) and Filosfofia Caribena, Vol. 2. (2013). Both of these recordings, released on Santos' Machete Records, are an homage to the richness of the Caribbean and Latin American cultures, to which Santos refers as Creole culture.

Santos was also named Resident Artistic Director of the SFJAZZ Center for the year 2012-2013, an honor shared with Bill Frisell, Jason Moran, and Regina Carter.

All About Jazz: What made you decide to be a musician?

John Santos: My dad, from Cape Verde, was a musician who played guitar and accordion; In addition, both of my grandfathers, from Cape Verdean and Puerto Rican, were musicians. So, I kinda fell into the family business.

AAJ: What led you to playing congas and other percussion?

JS: In African and Caribbean cultures the drums lead you into a spiritual path as they are used not only for playing for entertainment purposes but also for religious and spiritual ceremonies. In addition to playing congas and other drums, I am also trained to perform on the Nigerian bata drums for religious services.

AAJ: Your first band, Orchestra Tipica Cienfuegos, was considered to be the top Latin dance band during the'70s, What set it apart from other Latin groups?

JS: Tipica Cienfuegos was structured as a charanga orchestra, a traditional Afro-Cuban setup which is comprised of violinists and a flutist instead of horns. However, instead of playing the traditional danzones, we played more modern dance music like Los Van Van. Now, with Orchestra Batachanga I mixed the rhythms of the bata with modern Latin dance music.

AAJ: You have performed with practically every master Afro-Cuban drummer who has roamed the earth during the last 40 years. Who were the ones who had the deepest influence on your music?

JS: It is hard to say, because all of them were great. In the Bay Area, we were blessed to have Armando Peraza and Francisco Aguabella living here. I also count Mongo Santamaria, Candido Camero, Carlos "Patato" Valdés and Julito Collazo among my major influences. Other musicians whom I count as influences as well as mentors include the great Afro-Cuban bassist Israel "Cachao" Lopez, trumpeter Alfredo "Chocolate" Armenteros and the great timbalero, Orestes Vilato, with whom I was blessed to have played for many years. In the jazz idiom, I was blessed to have Dizzy Gillespies a mentor, as well as having the opportunity to play with him. I also had admiration for Max Roach, Steve Turré, John Handy, McCoy Tyner and Joe Henderson.

AAJ: You have listed the masters of modern jazz and Afro-Latin music. Who are some of the more contemporary musicians you have played with?

JS: I really like and respect the drummer Pedrito Martinez. He brings an entirely new angle to playing Afro-Cuban music. Roman Diaz is an-all around player who can also sing, dance rumba and write poetry. He also happens to be the padrino [godfather] to Pedrito, as well as his mentor. Then there is Giovanni Hidalgo, who is simply one of the best. I think that Cuban pianist Elio Villafranca is a tremendous player who deserves more recognition. I also feel the same way about pianist Omar Sosa, who is one of the most visionary composers and players I've ever worked with. 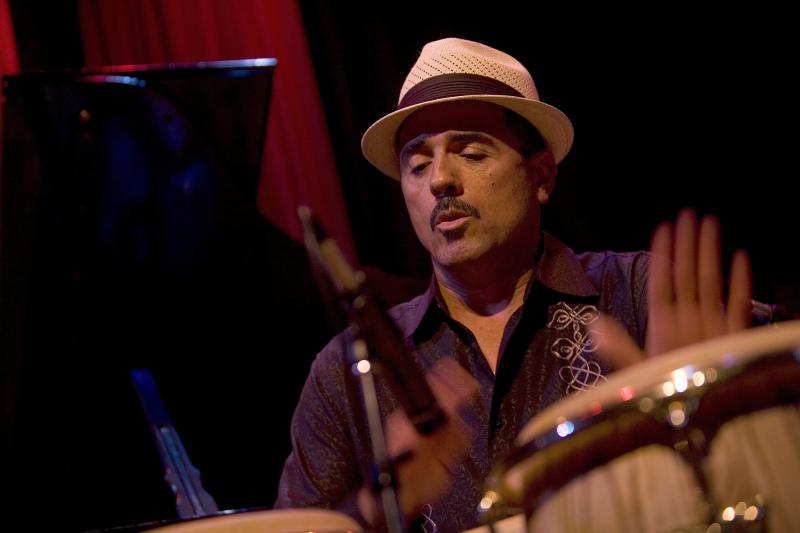 AAJ: What is it about West Coast Latin music that sets it apart from music on the East Coast?

JS: We are exposed to a wider range of music out here than cats in New York. In addition to jazz, we listen to funk, blues and R&B, and we incorporate them into our music. In addition, there is more of a diversity of cultures from Latin America in San Francisco. In addition to Cuban and Puerto Rican music, we are also exposed to music from Central and South America and they end up in the mix.

AAJ: You were named as a Resident Artistic Director to the SFJAZZ Center for the 2012-13 season. How does it feel to be honored in the old home town?

JS : I definitely feel honored by being selected as a Resident Artistic Director. Not only for the designation, but also for the opportunity to work on composing some new music without having to deal with day-to-day issues. In addition, I have the chance to collaborate with some great musicians, such as Regina Carter, Bill Frisell, Jason Moran, and Miguel Zenon.

strong> AAJ : Your name has been linked to the Machete Ensemble brand for almost 30 years. Did you accomplish what you set out to do musically with that group?

strong> JS : When I formed the Machete Ensemble, I wanted to create music which was a synthesis of traditional Afro-Cuban, and other Afro-Latin musics, with modern jazz. I know that Fort Apache was better known, but I feel that we were just as creative. In addition, I worked with some top-notch players such as Dr. John Calloway, Melecio Magdaluyo, the great Orestes Vilato and Wayne Wallace. These cats fit in with my goals and visions and after all these years they are like my brothers. Of course all good things have to end sooner or later. I decided that I had done all I could with Machete, and try to take my music in another direction with this sextet—which, I can happily say, includes some of my cats from the old group. On my recordings with Machete, I made it a point of using some of the legendary masters of Afro-Latin music such as Cachao [Lopez] Vilato, and Chocolate [Armenteros].

strong> AAJ : Your first two CDs with the sextet seem to be connected by an underlying theme related to the history and music of Latin America.

strong> JS : Yeah, I'm glad you caught that theme. I wanted to create a work which captured the essence of what I consider to be Creole culture in the Caribbean and Latin America. This includes the various musics of Cuba, Brazil, Haiti and Puerto Rico, as well as New Orleans and New York. In addition, these cultures have distinct literature, dance, spiritual practice .. even the foods our ancestors brought from Africa and Asia. I have always believed that the Creole cultures are the epitome of American migration, adaptation and survival with indigenous, African, Asian and European cultures. Through these recordings, I wanted to convey the struggles, strength, humor and power of Caribbean art, and the unity it evokes throughout the Americas.

AAJ: With everything that you have accomplished musically in the last 40 years, is there a project you want to undertake, which you haven't done yet?

JS: One of the projects I am working on now with my group is a project which would combine tipica music from Cuba with jibaro music from Puerto Rico. I plan to use the legendary Cuban musician Ernesto Oviedo, who has never played in the States. I plan to record this work and I'm hoping that we will be able to perform this around the country. Overall, I will be continuing to perform and promote this great music for as long as I am able.